President Park Geun-hye on Monday held talks with Mongolia's new parliamentary chief and prime minister as part of her efforts to strengthen economic and political ties with the resource-rich country.

Both Mongolian politicians were inaugurated earlier this month after their Mongolian People's Party won a landslide victory in last month's general elections. The MPP bagged 65 seats in the 76-member legislature. 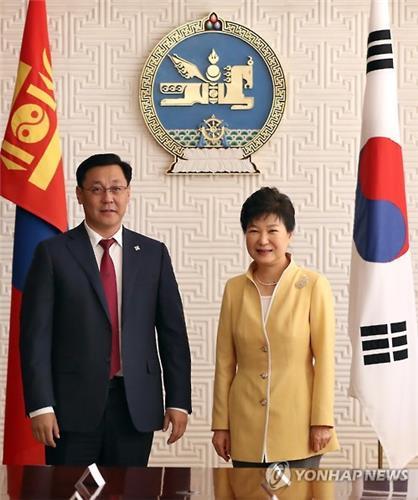 President Park Geun-hye (right) and Mongolian Prime Minister Jargaltulga Erdenebat pose for a photo before their talks in Ulaanbaatar, Mongolia on July 18.(Yonhap)
Mongolia has a dual executive system in place. Under the system, the president, elected by a popular vote, takes charge of defense and foreign affairs, while the prime minister, selected by the parliament, leads economic and other domestic affairs.

During her meetings with the two politicians, Park took note of the fact that the bilateral relationship has deepened and widened in various areas including trade, culture and infrastructure development.

Park also called on them to help establish a business environment favorable to Korean firms pushing to expand their investments in the Mongolian market. She also asked them to support the efforts to "realize the potential of bilateral economic cooperation" through various measures including the signing of an economic partnership agreement.

During a summit between Park and Mongolian President Tsakhiagiin Elbegdorj on Sunday, the two countries agreed to seek the EPA, similar to a free trade agreement. They have decided to launch a joint study on it as early as late this year.

Touching on the issue of North Korea's nuclear and missile threats, Park stressed the need for the international community to put up a united front and faithfully implement the U.N. Security Council sanctions that were imposed in response to Pyongyang's nuclear test in January and long-range rocket test the following month.

In her talks with Enkhbold, Park pointed to active exchanges that the legislatures of the two nations have made, expressing hope that such exchanges would serve as a catalyst for the development of relations between South Korea and Mongolia.

Enkhbold is considered a pro-South Korea politician in Mongolia. He visited Korea in 2000, 2001 and 2005, when he was mayor of Ulaanbaatar. He also visited Seoul in 2008 and 2009 while serving as vice prime minister. (Yonhap)