Inside the courtrooms of the International Criminal Court and in local communities, we are hearing the voices of those who have survived some of the world’s most heinous crimes. Stories of tremendous loss. Stories of human suffering that could have – and should have – been prevented. “I lost my entire family.” “I have lost my dignity.” “The only hope I have left is for justice.” 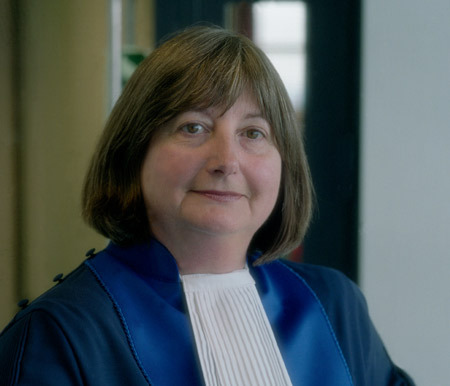 New ICC President Judge Silvia Fernández de Gurmendi (Argentina) ©ICC-CPI​
In our own lifetimes, in conflicts unfolding even today, atrocities have been planned and executed, leaving behind victims of widespread or systematic crimes. Societies across the globe have been deeply scarred and divided by crimes such as attacks on civilians, murder, using child soldiers and rape as a tool of war. Violence in one place inevitably causes instability in others. For some, this may seem a distant if disturbing fact, but for hundreds of thousands of others, it is their only reality.

18 years ago, the world took a huge step forward in committing to bring to justice those responsible for such crimes. On 17 July 1998, I witnessed this event first-hand, at a conference in Rome. Nations worldwide adopted on that date an international treaty, the Rome Statute, for the creation of the International Criminal Court. With staunch determination, states, civil society and other like-minded groups then worked to obtain sufficient ratifications of the treaty to make the ICC a reality. Its mandate is to hold perpetrators of war crimes, crimes against humanity and genocide accountable.

In the years since, much has been done to address these crimes. The ICC has grown into a robust judicial institution. Its Office of the Prosecutor has opened investigations in 10 conflicts across 9 countries. The Prosecutor is analyzing several other conflicts, extending work across several continents. Convictions have been handed down for the use of child soldiers, murder, sexual violence. The Court has ensured participation of 13,000 victims in its cases, through legal representation. At the ICC, we have the tools to ensure fair trials. We are committed to fighting impunity and providing justice to victims.

Atrocious crimes still occur. Much more work is to be done. Therefore, this 17 July, on the anniversary of the Rome Statute and International Criminal Justice Day, we call again for solidarity in working to make justice effective and ensure that these crimes do not go unpunished.

The Rome Statute recognizes that grave crimes threaten peace, security and the well-being of humanity and aims at contributing to the prevention of such crimes by making their perpetrators accountable. Support for this aim is essential. We need global support from states yet to ratify the Rome Statute, from states that have ratified, as well as from all those who stand against injustice.

The ICC also requires specific forms of cooperation to investigate and prosecute perpetrators and ensure access of victims to justice. We need witnesses that come to the Court and give their testimony so that the judges can know what happened. We ask everyone to help the Court to protect the witnesses by respecting their anonymity when needed. Since we do not have our own police force, we rely instead on the cooperation of states to make arrests. States and organisations also help in gathering and preserving evidence, freezing suspects’ assets, and enforcing sentences. The Rome Statute also created the Trust Fund for Victims, which is supported by state contributions to ensure reparations and support to victims. Already more than 180,000 victims have benefited from its assistance programmes.

Beyond our daily work, to reach our broader aims, and to seriously address atrocity crimes, there must be a unified, comprehensive response from the international community. We have to demonstrate that there are consequences for those who commit genocide, war crimes and crimes against humanity. It is our duty to do our utmost to provide justice to victims of such acts. None of this can happen unless national, regional and international actors alike are aligned in their commitment to the rule of law, human rights and justice. To deter future crimes, we must establish a consistent pattern of accountability.

For those who have suffered harm, we stand firm in our commitment to make sure that justice is done. For this and future generations, we will do our utmost to help prevent further suffering. We ask everyone to join us in this cause.