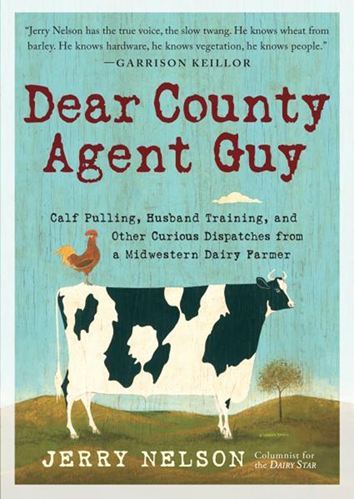 
I should have seen this coming, seen that Jerry Nelson's essays about farming weren’t quite what they seemed. I' a farmer’s daughter, and familiar with the irresistible corniness that comes with telling stories about rural life -- the “don‘tcha knows” and the punchlines about winter temps rivaling Siberia -- “and that was just in my bedroom.”

Many of the essays in “Dear County Agent Guy” have been published in various farm magazines, no doubt offering a welcome levity amid reality. Well and good. Then Nelson, who farms in South Dakota, wrote about a cow that went lame. Its future became limited to, as he wrote, “working at McDonald’s -- and I don‘t mean as a cashier.” So true. And so hard to accept.

The family tried nursing the cow back to health and succeeded, but it made her spoiled, which led to all sorts of mischief. I’ve lived that. Nelson nailed it. Then he wrote about farm dogs. And mean bulls. And the weirdness of getting a street address. Suddenly I was back on the farm. By the time I got to the essay called “Visiting,” I was hooked by Nelson‘s honest observations of farming life.