[ The Korea Herald – Send E-mail ]
[Weekender] Misunderstandings about KATUSA
By Bak Se-hwan
Published : Jul 8, 2016 - 17:01
Updated : Jul 9, 2016 - 00:14
When faced with mandatory conscription in South Korea, all able-bodied men between 18 and 35 face the dilemma of choosing where to serve during their 21-month duty. This ranges from the regular army and the navy to auxiliary police and the marines.

Among these choices, serving in KATUSA, or the Korean Augmentation to the United States Army, is almost a dream come true and the most envied. 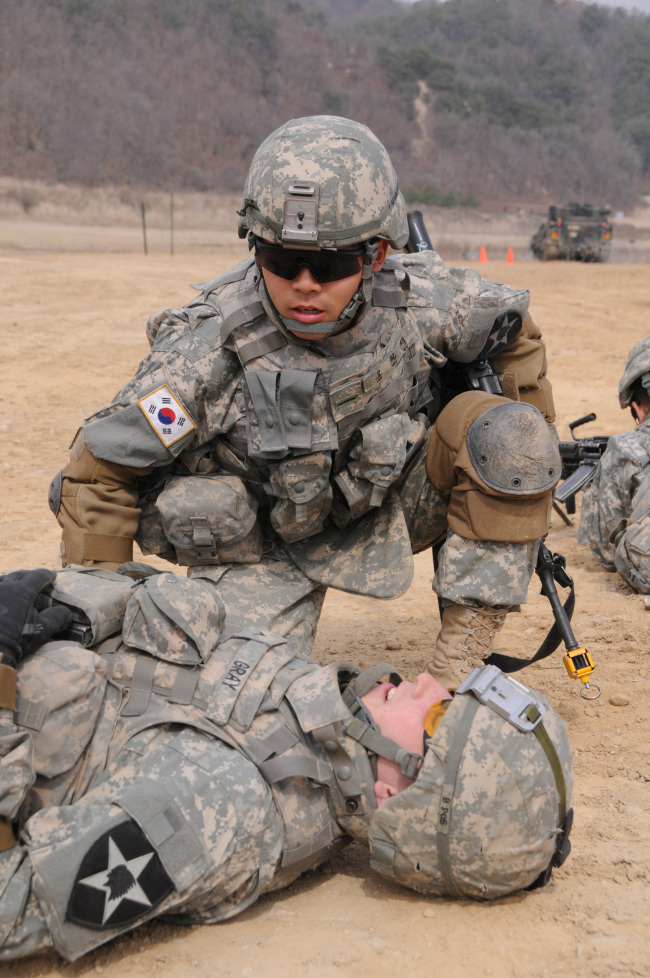 KATUSA soldiers and U.S. soldiers jointly participate in a combat exercise in this file photo. (8th ARMY, ROKA Support Group)
Each year, around 2,000 are chosen for KATUSA. They are selected from those who have preliminarily qualified by achieving the minimum required scores on English proficiency tests.

Competition among those vying for these positions is extremely high.

According to the Military Manpower Administration, last year’s competition rate for 2016 recruitment was 8.1 to 1 which meant only 2,041 candidates out of 16,992 applicants would make the cut.

But serving as a KATUSA soldier is by no means a walk in the park, as being a Korean soldier in a U.S. barrack can sometimes be challenging and involve misunderstandings.

Han, a 24-year-old part-timer at a convenience store in Seoul, finished his military duty last October as a KATUSA soldier. Han had joined KATUSA with the expectation that it would involve better treatment and a less intense training schedule at the U.S. Army base.

But the reality was quite different after he was dispatched to the U.S. Garrison in Yongsan after eight weeks of basic training.

“Unlike those in KATUSA, the U.S. comrades were those that signed up for the service voluntarily. They loved what they were doing as a soldier. It made a huge difference,” Han said.

“Twenty one months were all I needed to get back to normal life. I did not need any medal of honor. I just hoped for the time to pass by in a blur.”

KATUSA soldiers who failed to actively participate in training programs and classes in comparison to highly-motivated U.S. soldiers often faced severe disciplinary actions -- regardless of their ranks -- day and night by superiors, Han added.

Another former KATUSA soldier, who declined to be named, could not stand the prejudice that his fellow U.S. soldiers held against his peers. “They believe their rank is earned and not given for free,” he explained. “The automatic promotion of ranks for Korea’s enlisted soldiers is therefore viewed as less deserving of respect and less worthy in their eyes.”

Nevertheless, the popularity of joining KATUSA derives from the fact that they can receive better treatment, including meals, compared to regular South Korean military units. These perks include the freedom to leave military posts on weekdays with relative ease, and a comparably less hierarchical relationship with supervisors.

Above all, they get more educational opportunities, especially for English. 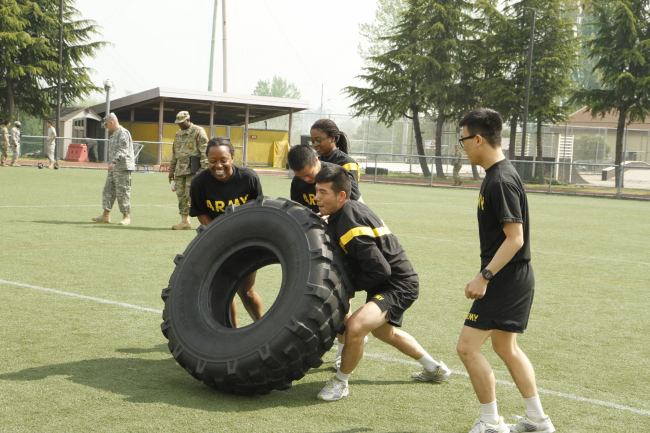 KATUSA soldiers participate in a team training exercise in this file photo. (8th ARMY, ROKA Support Group)
However, there are also some common misconceptions about KATUSA.

For instance, although the KATUSA selection process is random among those who have scored the required level in the English test scores, it is common to find questions online asking whether there is any appropriate level of scores to maximize chances of winning the KATUSA “lottery.”

According to the Military Manpower Administration, candidates are divided into three groups in accordance with their levels in the English fluency tests.

A more important factor is which month to apply for the KATUSA. Its recruitment takes place every September. The applicants can choose their desired month to enter. Some months are more preferable, meaning higher competition.

Park, a 23-year-old college student, chose March, the most competitive month, when applying for Katusa last year. He was lucky to be selected.

“I wanted to minimize the time gap after finishing military service,” Park said, referring to how new semesters in schools begin in March each year.

Another point of confusion is whether the KATUSA belongs to the Republic of Korea Army or the U.S. Army. It is a branch of the ROK that is augmented to the 8th United States Army. KATUSA soldiers must go through five weeks of ROK Army basic training and another three weeks of education and physical training by the U.S. Army at Camp Jackson in Uijeongbu.