[ The Korea Herald – Send E-mail ]
VW faces another suit over emissions:South Korea
By Korea Herald
Published : Jun 27, 2016 - 11:12
Updated : Jun 27, 2016 - 12:44
[THE INVESTOR] South Korean Customers of Volkswagen’s gasoline-powered vehicles have filed a suit against the German carmaker and its local unit over its manipulation of emissions tests, a lawyer said on June 27.

Jason Ha, who represents 26 owners of the Golf 1.4 TSI at Barun Law, said he filed the suit, demanding the firm and its local unit refund the cost of their cars.

The latest legal action came three days after prosecutors arrested an executive of Audi Volkswagen Korea for installing software in the Golf subcompact to cheat on their emissions tests in 2014 to get approval from the Korean government. 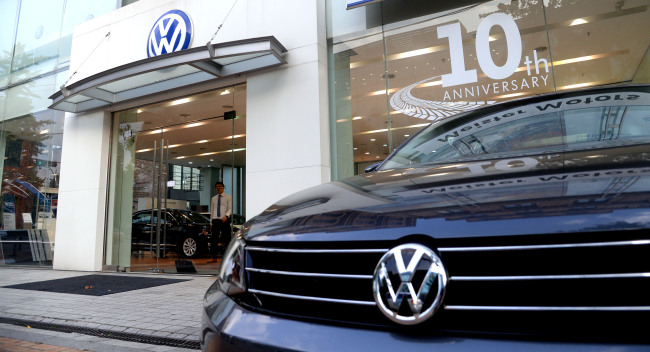 In November 2014, the carmaker obtained approval of the Golf 1.4 TSI.

Under Korean law, all imported cars should first receive approval from the National Institute of Environmental Research for their emissions results and noise levels.

Ha said he expects the number of Golf subcompact owners who join the suit will go up in the coming months, citing a total of 1,567 units of the Golf 1.4 TSI were sold in Korea since March last year.

On June 24, prosecutors said they suspect the company doctored over a hundred reports on emissions results, noise levels and fuel efficiency between August 2010 and February 2015. Some models were even imported without going through the proper certification process, they said.

They also asked the ministry to stop its discussions with the local unit of the German carmaker over a recall and order VW to refund the cost of their diesel cars fitted with EA189 engines.

Earlier this month, the Environment Ministry rejected VW’s plan to recall vehicles that fabricated emissions results for the third straight time, saying the local unit of the German carmaker did not admit to using a defeat device to trick the testing equipment.