Artist Lee U-fan will finally have a look at the paintings that the National Forensic Service confirmed as counterfeits of his works next Monday.

“We can’t conclude whether the paintings are forged or not since we haven’t seen them,” said Lee’s attorney Choi Soon-yong in a phone call with The Korea Herald.

Choi said Lee will then decide on when and how he will press charges against the art forgers -- there are suspected to be several art forgers -- and gallerists, who are accused of distributing the counterfeits.

One of the largest art forgery cases in Korea seems to be nearing its end as a 66-year-old art forger surnamed Hyun, who allegedly created fake works of Lee U-fan, was arrested in May and has been put on trial. All 13 works seized by police from galleries accused of distributing the counterfeits were confirmed to be fake. 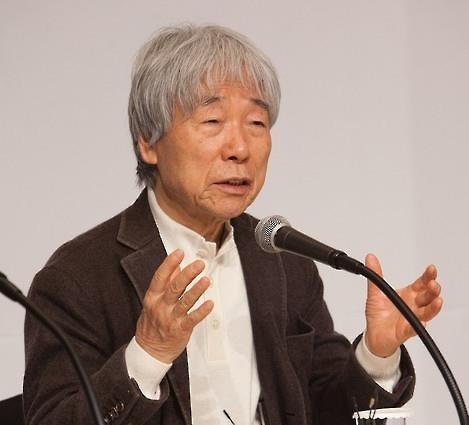 Lee U-fan (Yonhap)
When Hyun was arrested, he admitted to having made some 50 replicas of paintings by Lee U-fan in 2012. Some of them were among the 13 seized paintings.

“Art forgery scandals surface again and again because there’s no strict sentencing for art forgery,” said art appraiser Choi Myeong-yoon, at a seminar on measures to prevent art forgery held on June 9 in Seoul. The event was organized by the Culture Ministry.

The punishment for committing art forgery is relatively light compared to other crimes. But as the Korean art market expands and artworks by famous artists are treated as financial assets, there have been calls for stronger punishment for art forgers and those involved in distributing fake artworks.

Hyun was convicted twice for copying artworks of Korean art masters in the past. He was accused of forging artist Chun Kyung-ja’s signature on a copied painting in 1991, and then of making counterfeits of traditional paintings in 1995.

Both times he was given suspended jail sentences on fraud charges.

“Measures that enhance policing of art forgery activities in the market are needed,” said Shin Eun-hyang, the director of the visual arts and design division of the Ministry of Culture, Sports and Tourism.

Forged artworks seem to be on the rise in the last five years. 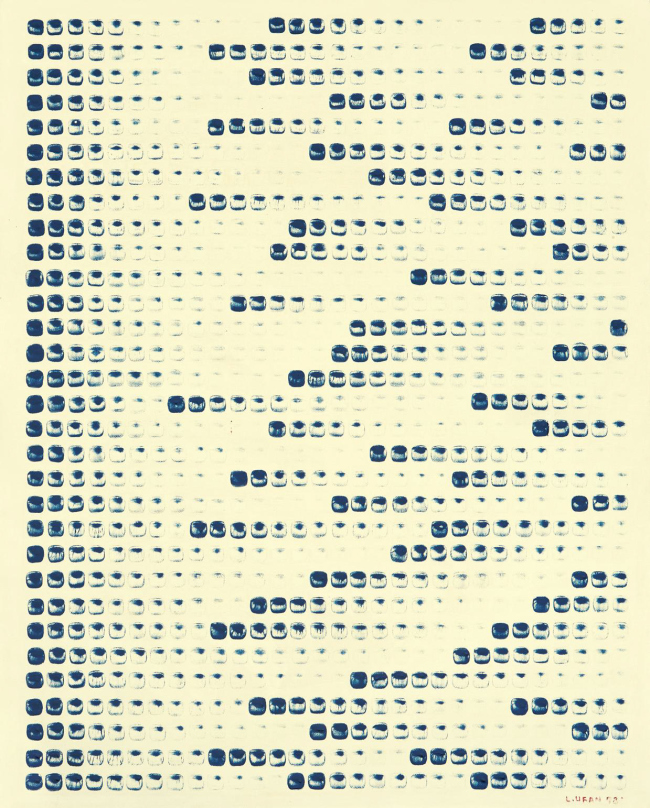 “From Point No. 780217” by Lee U-fan and its certificate of authenticity issued by the Galleries Association of Korea were confirmed to have been forged. (Yonhap)
Appraiser Choi Myeong-yoon said that the number of fake works that we know may be just a small part of what could be thousands of other fake artworks.

“I was assigned to authenticate some 3,000 artworks since 2005 until January this year by law enforcement agencies. All of them were fakes,” Choi said.

The sales of copied paintings of Lee U-fan started at a relatively unknown gallery in the art and tourist district of Insa-dong. The gallery owner was one of the many private art dealers who only trade artworks, not hold exhibitions. It is not listed with the Galleries Association of Korea, a group of 150 commercial galleries in Korea.

“The galleries which cause trouble are not members of the GAK. I believe we need a system that can enhance transparency of the art market,” said Park Woo-hong, the president of GAK and also president of Dong San Bang Gallery.

There are no special requirements that must be met to open an art gallery. Anyone who wants to open a gallery can start business after registering with the National Tax Service like any other businesses.

“Anyone can open their space for art trade under the name of gallery or auction. And art forgery persists and fakes are usually circulated by individual art dealers,” said Shin.

Artworks suspected as forged works are appraised at several private appraisal agencies and individual appraisers, including the Korean Art Appraisal Board, which handles the largest number of paintings. The credibility of art appraisal results are sometimes questioned as auction houses are involved in authenticating artworks consigned by their clients.

“Private art appraisal agencies currently enjoy autonomy in the appraisal process. It’s not known how many are in this business,” said Cho Hyun-seong of the visual arts and design division of the Culture Ministry. 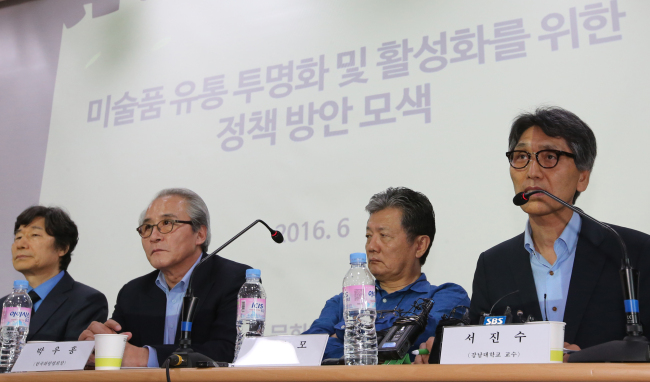 Art experts discuss ways to improve transparency in the Korean art market and art appraisal credibility at a seminar organized by the Ministry of Culture, Sports and Tourism on June 9 in Seoul. (Yonhap)
The lack of reliability of the current art appraisal system has led to calls for a public art appraisal institution, or licensing of private art appraisers.

The National Museum of Modern and Contemporary Art, Korea appraised Chun Kyung-ja’s “Beautiful Women” painting as an original piece by the artist, but its authenticity is still being questioned by many people, including family members of Chun. The late artist, in her lifetime, insisted it was not her painting.

The Culture Ministry said it is in the process of gathering ideas from art experts before announcing in August actual measures aimed at preventing art forgery.

But some art experts voice concerns that measures to regulate the market will hinder the growth of the Korean art market.

“I don’t see any reason why the government should be in a hurry to come up with solutions. The Korean art market is still in its infancy with just 20 years of market activities. Regulations should take effect step by step,” said Seo Jin-su, an economics professor at Kangnam University, who studies art markets in Korea and Asia.