According to the city government Wednesday, during its inspection of 48-kilometer section of arterial roads previously connected to cave-in accidents, 105 potential sinkholes were detected. 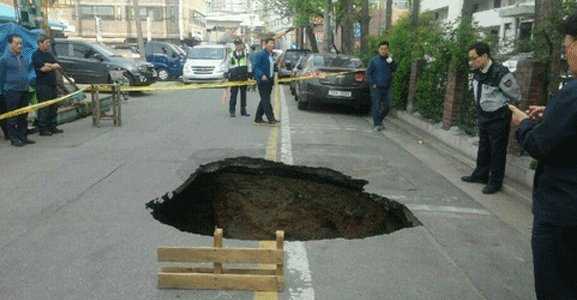 A sinkhole that opened up at an apartment complex in Sindorim-dong, Guro-gu, last year. (Yonhap)
With an additional 246-kilometer section to be scanned this year, an estimated 195 more cavities are expected be found.

The latest investigation began in the wake of February 2015’s sinkhole accident in front of Yongsan train station in Seoul. Last year, 56 sinkholes were detected in the city.

In the safety inspection that ensued, Ground Penetration Radar-mounted vehicles scanned the surface, then a portable GPR identified the exact location of the cavity and then the ground was drilled open to check the size of the hollow space beneath.

Using this method, On March 28, the bustling road in front of Chungjeongno Subway Station’s exit four was restored just in time before it sank. 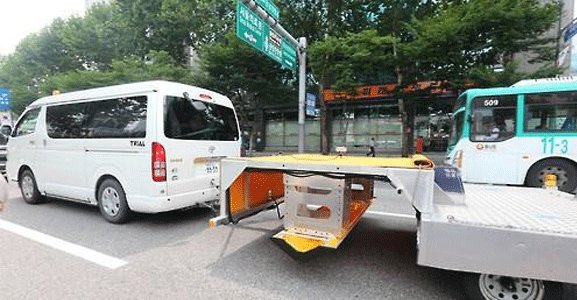 The special vehicle equipped with Ground Penetration Radar gears. (Yonhap)
Seoul City said that among the 105 detected cavities, 61 that appear to be in a critical condition will be restored by end-April. Another 35 less-severe cases will be restored by end-May. The rest that do not pose an immediate threat will be studied by urban developers to learn the cause behind the phenomenon.

According to the city government, the cavities discovered so far were around decrepit sewer pipes. The city plans to undertake their maintenance before the monsoon season.

Seoul City had borrowed help from a Japanese tech firm with the GPR technology for this round’s safety check. It is currently trying to develop its own GPR gadgets in collaboration with Seoul’s Sejong University and the U.S.’ University of Central Florida.

The city plans to repeat the GPR test every three years.