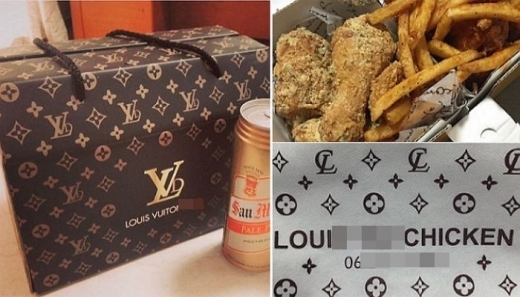 The restaurant owner, identified by his surname Kim, had named his restaurant in Seoul, “Louis Vuitton Dak.” The word “dak” means chicken in Korean.

In addition to the restaurant name, he created a logo similar to that of the French fashion house and put it on the restaurant’s napkins as well as on its take-out boxes.

Louis Vuitton filed a suit in September last year, calling for a ban on using its brand name for a commercial purpose and insisting that the chicken restaurant was damaging to it.

The Seoul Central District Court agreed and ordered Kim in October to rectify the unlawful activity, pronouncing a 500,000 won fine per day if he did not comply.

Instead, Kim added “cha” and “ton” to his restaurant name, changing it to “chaLouisvui tondak.”

His logic was that the previous “dak” meant chicken while “tondak” refers to a whole chicken. Kim argued that he had complied with the court ruling with his “brand new” restaurant name.

Louis Vuitton sued Kim again and the court ordered Kim to pay the French company 14.5 million won for the 29 days that the “new” name was displayed.

“Although he changed the name with different spelling and spacing, the previous one and the new one sound almost the same,” the court said.