[ The Korea Herald – Send E-mail ]
Korea aims to become global bio-health leader
By Sohn Ji-young
Published : Mar 30, 2016 - 15:49
Updated : Mar 30, 2016 - 15:49
The South Korean government reaffirmed its pledge to support the growth of the nation’s biotechnology and health care sector at the Bio Korea 2016 international convention, which kicked off Wednesday at Coex in southern Seoul.

The three-day convention -- which brought together some 23,000 industry officials to discuss and spotlight the latest trends in the local and international bio-health industry -- comes amid Seoul’s efforts to turn it into the country’s next economic growth engine. 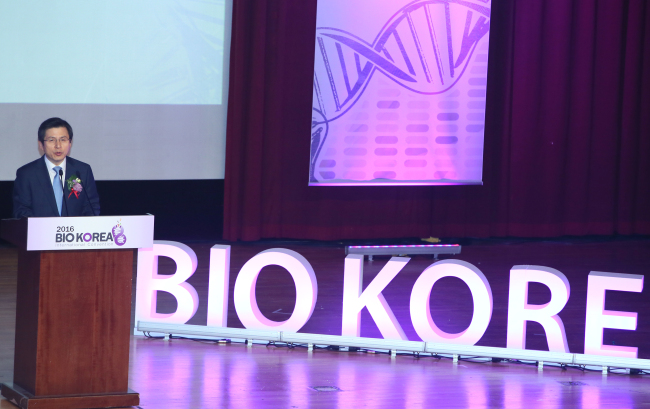 To help achieve the goal, Hwang said the government would create a special committee tasked with overseeing all legislations linked to biotech and health care in order to improve related tax, financial and pricing regulations.

The prime minister further expressed “high hopes” that local companies in the field will expand their global presence in the years ahead, referring to recent success cases like Hanmi Pharmaceutical. In 2015, the local drug maker sealed seven mega biopharma technology export deals worth some 8 trillion won ($6.93 billion) with multiple global pharma giants.

“Global pharmaceutical giants are more focused on outsourcing new technologies rather than self-development. With promising drug candidates and good scientific data, there are always opportunities.”

In regards to negotiating licensing deals, Lee advised that the task should be led by not only the related researchers and employees but also the company executives, who can play an integral role in striking a “good deal.”

As Korea’s new drug development efforts are underway, director and founder of Seoul-based Digital Healthcare Institute Choi Yoon-sup urged the public to take note of a new trend toward digital health care -- the use of information and communications technologies to address a person’s health problems.

“Digital disrupts everything, and health care is not an exception,” Choi said. “By utilizing the extensive data compiled by our bodies every day, many new health care technologies are born.”

For instance, sensors on smartphones and wearable devices can be used to monitor and collect data about a person’s body condition. This resource can be used to evaluate a person’s health and even predict ailments -- a service previously available only at hospitals.

Personal genome analyses are able to reveal health risks that a person may be particularly susceptible to, while artificial intelligence and deep learning already help doctors prescribe the best treatment for cancer, Choi explained.

For Korea’s digital health care segment to advance, information privacy and ownership issues must be well regulated, the expert said, urging the government to step up its efforts to enact “bigger changes” to its existing policies.

Bio Korea 2016 will continue until Friday. For more information about the convention, visit www.biokorea.org.