[ The Korea Herald – Send E-mail ]
Hyundai Motor to resume export of auto parts to Iran in April
By Korea Herald
Published : Mar 15, 2016 - 16:21
Updated : Mar 15, 2016 - 16:26
Hyundai Motor Group is gearing up for the reentry into the reopened Iranian market by exporting the semi-knockdown products. The automotive group said Tuesday that its two auto-making arms --Hyundai and Kia -- will supply its Complete Knock Down (CKD) products to Iranian automobile companies.

Market watchers forecast the automaker’ export resumption will begin in April for the second quarter. CKD refers to semi-knockdown products that are intended to be assembled locally. 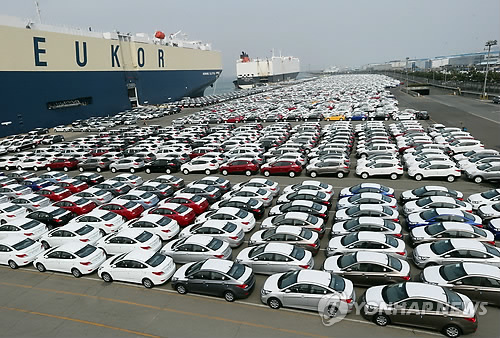 Cars waiting to go onboard for export (Yonhap)
Before the Iranian sanctions, Hyundai Motor Group had sold around 20,000 units to Iran cars annually. The automaker stopped its exports of cars and auto parts in 2012 due to the sanctions.

The nation’s second largest conglomerate resumed selling cars in Iran last year, albeit on a small scale. However, the recent changes involving Iran’s deactivation of its nuclear centrifuges are expected to affect the market.