Cheong Wa Dae called the move a “direct challenge” to the international community given the ongoing sanctions discussions at the U.N. Security Council over the communist state’s fourth nuclear experiment one month ago.

“We are sternly warning that if North Korea pushes ahead with a long-range missile liftoff, it will have to pay a severe price for posing a grave threat to peace and security of not only the peninsula but also the region and the world,” Cho Tae-yong, secretariat of the presidential National Security Council and vice chief of the National Security Office, said at a news conference.

“North Korea must realize that any launch using ballistic missile technology constitutes a clear violation of the UNSC resolutions and abandon the plan immediately.”

Cheong Wa Dae spokesperson Jeong Yeon-kuk also told reporters that the presidential office is closely monitoring movements across the border, though he did not elaborate on any forecast timing or preparations progress for the looming takeoff.

Later in the day, China joined in urging the North to exercise “restraint” and forsake the plan. A fresh missile launch would deal a blow to Beijing, its prime diplomatic and economic sponsor that has been resistant to the U.S.-led drive to impose stronger punishments for the recent atomic blast, with its top nuclear negotiator Wu Dawei now in Pyongyang.

“We express our serious concern,” China’s Foreign Ministry spokesman Lu Kang told reporters, adding that it acknowledges its neighbor’s right to the peaceful use of space, but the right is subject to UNSC restrictions.

Mindful of other countries’ calls for keeping the recalcitrant Kim Jong-un regime in check, Lu stressed China’s limited sway. “We don‘t want to see any escalation of tensions. But, if the relevant country insists on doing so, we are not able to stop them,” he said.

The exact date of a fresh launch remains to be seen, but it could likely come around the Feb. 16 birthday of Kim Jong-il, the incumbent ruler Kim Jong-un’s late father and longtime despotic leader of the North, in light of the pattern of past events. 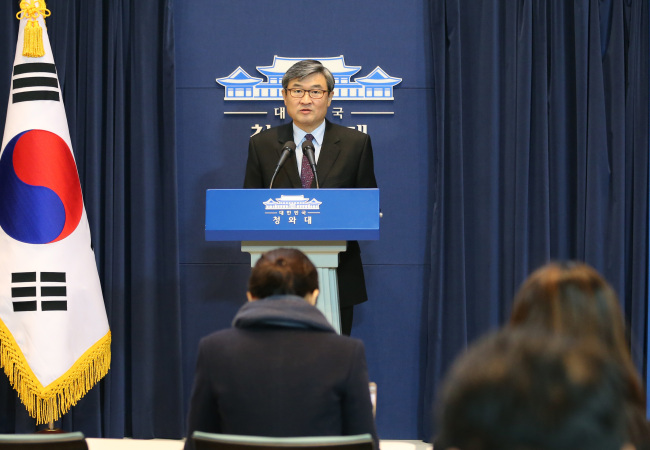 Cho Tae-yong, secretariat of the presidential National Security Council, speaks at a press briefing at Cheong Wa Dae in Seoul on Wednesday. Yonhap
Yet Tuesday’s notification defied the prevalent anticipation that the North would stage a missile test or other major provocations after the UNSC resolution and possibly to coincide with the ruling Workers’ Party’s first congress in 36 years slated for May, or the April 15 anniversary of the birth of Kim Il-sung, North Korea's founding father and the late grandfather of Kim Jong-un.

With the ongoing UNSC process taking more time, however, it may have decided to proceed with the launch early to “avoid being caught up in another sanctions campaign when the party festival is in the offing,” a senior diplomat told The Korea Herald, asking for anonymity due to the sensitivity of the issue.

With more than 500 South Koreans staying at a joint industrial park in the North Korean border town of Gaeseong, the Unification Ministry urged an immediate withdrawal of the launch plan.

“We will thoroughly manage the cross-border situation and prepare for any provocation with the safety of our citizens in North Korea being the top priority,” spokesman Jeong Joon-hee said at a media briefing.

Presiding over a meeting with defense policy advisers, Defense Minister Han Min-koo said the North is further escalating tensions by introducing its missile launch plan even as the UNSC seeks to levy new sanctions over the underground explosion.

“We will establish an omnidirectional defense readiness posture in preparation against the North’s provocations and threats this year, strengthening the South Korea-U.S. alliance’s response capabilities and developing the Kill Chain and Korea Air and Missile Defense preemptive strike assets,” he said during the session.

Satellite imagery indicates that the North appears to have completed a project to extend the existing 50-meter-tall launchpad at the Sohae missile station by more than 10 meters, which has kindled concerns that it could try out a space launch vehicle larger than the already tested 30-meter Unha-3. 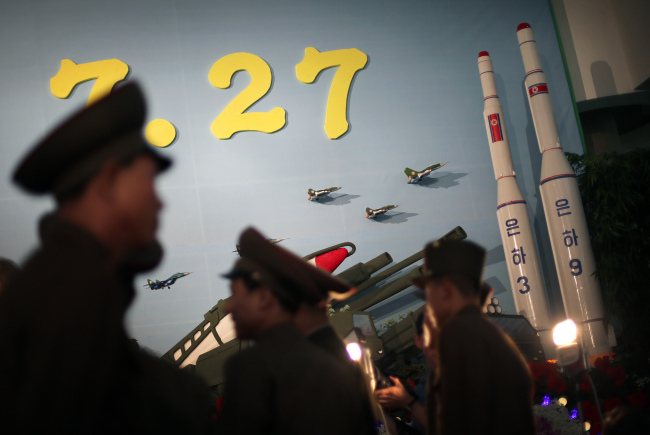 Models of North Korea’s Unha-9 and Unha-3 rockets are displayed at an exhibition hall in Pyongyang in this photo dated July 26, 2013. Yonhap
As signs grow over the imminent liftoff, Seoul, Washington and Tokyo are stepping up their detection activities, fully mobilizing their respective radars and aircraft, early warning and spy satellites and Aegis-equipped destroyers.

The U.S. Department of State also warned Pyongyang against another rocket firing on the heels of the latest nuclear test that was itself an “egregious violation” of UNSC bans, while Japanese Prime Minister Shinzo Abe slammed the plan, saying it in fact involves a ballistic missile.

“Nuclear weapons in the hands of North Korea, particularly coupled with ballistic missiles, coupled with their -- I say this -- odd demeanor, and position right there on the Demilitarized Zone. That’s a really serious combination,” he said during an event at the Economic Club of Washington on Tuesday.

North Korea has carried out five rounds of long-range rocket tests since 1998 as part of its efforts to upgrade and diversify delivery means of atomic bombs.

In the run up to its latest and successful liftoff in December 2012, Pyongyang informed Washington and Beijing via official or indirect diplomatic channels about a week before. It also provided the international agencies with information on its time frame and where the parts may fall, while conveying a “Notice to Airmen” to Japan and other neighbors.