The 27-year-old was hailed as the epitome of Korean entrepreneurship, the indefatigable pursuit of success from scratch.

However, his alleged embezzlement and fraud have torn down that image, and it will take Hwang and his business considerable time and effort to recover from the scandal, industrial insiders say. 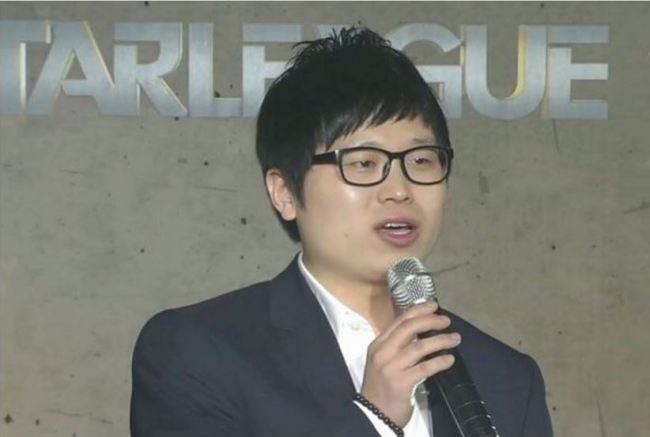 Hwang Hyo-jin, founder and CEO of Sbenu. (OnGame)
Hwang posted on the company website that he is truly sorry for the situation, but not everything the media has reported is true and he would like to rectify them at a press conference soon.

“I will do whatever is in my power to reclaim the damage I have inflicted on many people’s lives,” he said, before disappearing from the public eye. The Mapo police station in Seoul is investigating the case and will decide on referring the case to prosecutors for indictment.

This has come as a shock to many people who witnessed the heady rise of the entrepreneur.

Hwang in October 2012 established an online shoe store, Shinbal Farm. Before this, he was a popular broadcasting jockey for AfreecaTV, a video-streaming service. He broadcast online games, capitalizing on the emerging e-sports trend in Korea.

The company quickly gained attention for its colorful sneakers in trendy designs. Shinbal Farm changed its name to Sbenu ― a compound of “sonic,” his name as a jockey, and “benu,” an immortal bird from the Egyptian myths ― and expanded its presence in the off-line market.

Hwang understood the importance of marketing, with endorsements by celebrities ― popular singers IU and AOA to fashion model Song Jae-rim ― and the company even sponsored Hollywood starlet Chloe Grace Moretz’ visit to Korea, filming her trotting around Seoul in Sbenu sneakers.

Given his past experience, Sbenu became a title sponsor of a Starcraft online league game. His company even became the official casual footwear partner of popular British football club Manchester United.

Hwang was also admired by youngsters for his glamorous lifestyle. He introduced a collection of expensive cars such as the Lamborghini Aventador, Bentley GT and Ferrari 458 on his blog. His love for high-end watches and fashion also created a legion of fans.

And these rather excessive marketing strategies worked: Sbenu opened its 100th outlet within two years of operation, posting 50 billion won in sales in 2015, and launched a clothing line for business diversification.

Hwang appeared in numerous interviews and lectures, urging youngsters to dream big. He said, “People see me as lucky but I think I am a hard worker.”

Things started to fall apart last year when customers claimed that the dyes of Sbenu sneakers rubbed off on other garments or cloths when washing. Some cleaners reportedly refused to take Sbenu shoes for this reason.

But the real blow was the suppliers’ and franchisees’ claim that Sbenu failed to pay them while spending more than 10 billion won on marketing. The franchisees said Sbenu gave its products to clearance sale stores near their outlets and sold new shoes for a bargain in order to secure cash, which in return has inflicted substantial financial damage to their businesses.

One of the suppliers on Dec. 15 raided the headquarters in Seoul while naked, and then hurt himself and threatened the workers to pay him 2.8 billion won the company allegedly owes. But Sbenu’s cash reserves fell to 8.4 million won at one point.

Hwang has reportedly sold all his luxury goods. He is now laying low at his office and is avoiding the media or other external contacts.