In their summit held on the sidelines of a U.N. climate change forum in Paris, Park stressed the need to curb Pyongyang’s nuclear ambitions with “a sense of urgency” and “determination.”

“I am asking for Russia’s active role in making North Korea face reality and have a rethink on its nuclear problem in order to resume meaningful talks on (North Korea’s) denuclearization,” she said. Park also asked Putin to cooperate and support South Korea’s efforts to create conditions for a peaceful reunification on the Korean Peninsula, Cheong Wa Dae said. 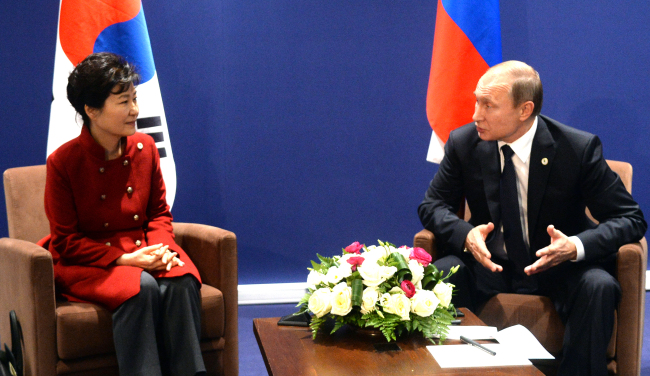 President Park Geun-hye (left) talks with Russian President Vladimir Putin on the sidelines of a U.N. conference on climate change in Paris on Monday. (Yonhap)

Russia is a member of the long-stalled six-nation talks aimed at ending North Korea’s nuclear weapons program in return for political concessions and economic aid. The nuclear talks -- which involve the two Koreas, Russia, the U.S., China and Japan -- were last held in 2008.

Park last had a one-on-one meeting with Putin when the Russian leader visited Seoul in November 2013, though the two sat next to each other at a military parade in Beijing in September. The two leaders also vowed to boost their relations by cooperating in developing Russia’s Far East and Siberia, Park’s office added.

During her stay in Paris, the South Korean leader visited the Bataclan Theater, one of the sites targeted by terrorists in the deadly Paris attacks last month.

Park laid white chrysanthemums in front of the theater and paid tribute to the victims.

“I offer condolences to the victims of the terror attack, and we will always be with France,” Park told French Culture Minister Fleur Pellerin at the site on Monday evening. Pellerin thanked Park for visiting the site that it showed strong solidarity with France.