[ The Korea Herald – Send E-mail ]
Who is responsible for troubled KF-X?
By Shin Hyon-hee
Published : Nov 27, 2015 - 18:42
Updated : Nov 27, 2015 - 20:18
With Korea’s push to build homegrown fighter jets turning increasingly vapid in the face of a string of setbacks for U.S. technology transfer, calls are growing to clarify where the responsibility lies.

The responsibility issue has come to the fore since Washington was found to have vetoed last April the U.S. defense firm Lockheed Martin Corp.’s envisioned handover of four technologies vital for Seoul’s project to introduce its own first KF-16-class warplanes by 2025, dubbed KF-X or Boramae.

(Yonhap)
The disapproval, reaffirmed by U.S. Defense Secretary Ash Carter during talks with Defense Minister Han Min-koo last month, triggered concerns over a delay in the 18.1 trillion won ($15.7 billion) initiative ― and even its ultimate feasibility.

Officials at the Defense Ministry, the state-run Defense Acquisition Program Administration and think tank Agency for Defense Development are confident they will nail down the technologies and pull off the project on time through research and development at home and cooperation with other countries, such as the U.K., Israel or Sweden. A bilateral working group with the U.S. will be formed in line with an agreement between Han and Carter to facilitate the drive, they say.

DAPA head Chang Myoung-jin even vowed during a parliamentary audit last month to complete the development of an AESA radar with air-to-ground capabilities by 2021, three years ahead of the initial schedule. The system is deemed the most challenging among the four. 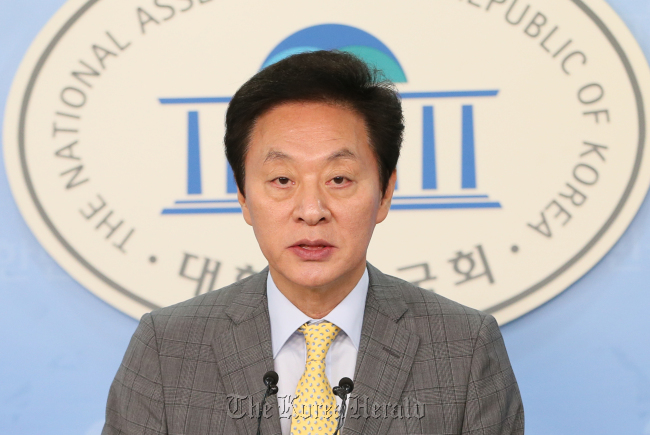 Rep. Chung Doo-un of the ruling Saenuri Party who chairs the parliamentary defense committee speaks during a news conference at the National Assembly on Nov. 17. (Yonhap)
Yet the absence of concrete methods, coupled with constant flip-flops in the senior officials’ remarks, has only deepened skepticism.

Lawmakers from both the ruling and opposition camps have relayed calls to spell out who is responsible for the debacle and how to make sure billions of dollars of taxpayer money will not be misspent, with some members of the parliamentary defense committee, including chair Rep. Chung Doo-un of the ruling Saenuri Party, floating scrutiny by the Board of Audit and Inspection.

In a bid to defuse criticism, President Park Geun-hye herself displayed her support for the project upon being briefed by Chang, then sacked her chief foreign affairs and security secretary, Ju Chul-ki, but to little avail.

Critics have pointed to Kim Kwan-jin, chief of the presidential National Security Office, as a prime mover, demanding his resignation. As then defense minister, he presided over a controversial defense acquisition committee meeting in March 2014 to upend the earlier selection of Boeing Co. to instead pick Lockheed as a provider of 40 next-generation radar-evading fighters for deployment between 2018 and 2021, despite the slim possibility that the U.S. would issue the unprecedented export license for any of the four technologies. The know-how sharing was part of the 7.3 trillion won deal.

At a parliamentary audit late last month, Kim admitted that he came to acknowledge Washington’s rejection last June but did not report to the president until September.

“If no one were to carry the ball, we have no option but a formal audit,” Chung told the defense panel on Nov. 17. “If Ju stepped down as a sign to bear the responsibility, we will accept that, but I understand this was not it.” 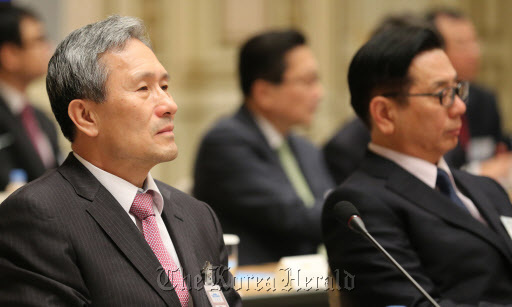 Kim Kwan-jin (left, front), chief of Cheong Wa Dae`s National Security Office, attends a meeting of the presidential committee on unification preparation on Nov. 5. (Yonhap)
“To me, this looks like something that is subject to special public questioning rather than a parliamentary hearing with professors,” an industry source said, referring to a session held early this month to facilitate technical understanding.

“It’s a multibillion dollar business, yet the people who are representing it now will not be there when the project will kick into high gear and

suffer major technical difficulties, unlike their pledges. Who will take the responsibility then?”

The outlook is growing darker for the transfer of another 21 technologies, for which DAPA had anticipated to secure the U.S. State Department’s endorsement this month “without any major problem,” as the agency demands specifications of subtechnologies as part of the plan. Seoul and Washington have also yet to hammer out details on the working group plan.

No potential pathway appears to be in store for now. The proposal for a state audit is unlikely to translate to reality given the opposition of some ruling lawmakers. On Thursday, the committee decided to create a subcommittee tasked with “managing KF-X related risks” instead.

In light of its scale and strategic significance, some observers have argued the program should be steered by a ministerial or intra-agency structure, rather than the procurement agency, so as to facilitate pangovernmental cooperation and boost transparency.

Calling for a BAI audit, Rep. Yoo Seung-min of the ruling Saenuri Party has also suggested an official risk management group within the parliamentary panel involving experts. “The committee should play a greater role in keeping the administration in check, together with specialists,” he said during the recent expert hearing.

“Fortunately there is apparent consensus that the project should go forward among the lawmakers and in the media, but it is true that officials, especially those who speak at the National Assembly and before the cameras, need to come clean more about the situation now, rather than trying to get off the spot,” a government source said, requesting anonymity due to the sensitivity of the matter.