Yoon Jeong-sik, a 30-year-old who has studied in the U.S. for half of his life, has struggled to find a job in Korea. Having graduated with a bachelor’s degree in political philosophy from a state university in California, Yoon has remained unemployed for almost two years since finishing his mandatory military service.

“I thought the applicant like me who speaks fluent English and has work experience would have little trouble getting a job in Korea,” said Yoon.

He applied to more than 30 companies, his confidence buoyed by the fact that he had received a “global education” in the U.S. since he was in elementary school. “Now I am afraid that my 15-year endeavor in the U.S. will come to nothing,” he said. 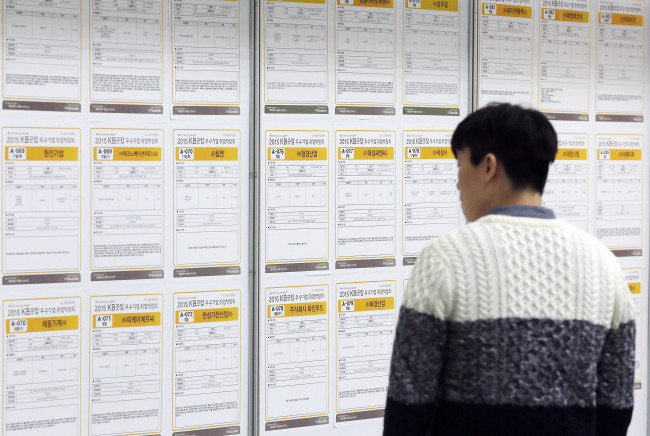 A young jobseeker looks at a job posting on a bulletin board. Yonhap
His frustration in finding a job in Korea reflects a changing trend among Koreans who once considered studying overseas as a ticket to success back home. Education authorities said Tuesday that the number of students who went abroad to study has plunged by two-thirds over the past eight years.

According to statistics released by the Ministry of Education and Korean Educational Development Institute, 10,907 students left Korea to study overseas in 2014. In 2006 the number was 29,511.

The number of Korean students who went overseas to study has fluctuated throughout the 2000s. Since 2000, when sending young children abroad to study became popular among parents, the number of students has increased annually with 2000 marking 4,397, 2001 showing 7,944 and 2002 at 10,132.

Education officials estimated that, if trends continue, the total number of students studying abroad in 2015 would be less than 10,000. They attributed this to the widespread notion among young students that studying overseas does not automatically connect to better job prospects at home.

“Back in previous days, students believed that studying abroad would help them get a better job. ... But those benefits don’t seem to exist anymore. Also, there are many domestic schools where students can learn English (without young students going abroad),” said officials from the Ministry of Education.

Human resources departments at Korean companies agreed that those who have studied overseas do not necessary land better jobs than their competitors who lack overseas educational experience.

“Admittedly, companies are worried whether those who have graduated from colleges overseas would adjust to Korea’s unique working environment. If all things are equal among the applicants, I would prefer those who are familiar with Korea’s work ethics,” said an anonymous recruiter from a Korean retail conglomerate.