[ The Korea Herald – Send E-mail ]
Floating over the DMZ
Korean artist Choi Jae-eun, Japanese architect Shigeru Ban seek to build elevated walking trail
By 이우영
Published : Nov 16, 2015 - 18:12
Updated : Nov 16, 2015 - 18:18
Four kilometers wide and 240 kilometers long, the Demilitarized Zone serves as a buffer between North and South Korea, which technically remain at war. Heavily fortified with landmines and barbed wire, the strip of land is guarded by millions of soldiers and entrenched artilleries on both sides.

The decades-old military tensions, consequently, have made the DMZ one of the world’s best-preserved sanctuaries for thousands of natural species.

South Korean artist Choi Jae-eun believes this rich ecosystem can be a starting point for the two Koreas to move toward reconciliation and unification. To start, she has proposed the idea of opening up a part of the land and building a 15-kilometer-long elevated walking trail. 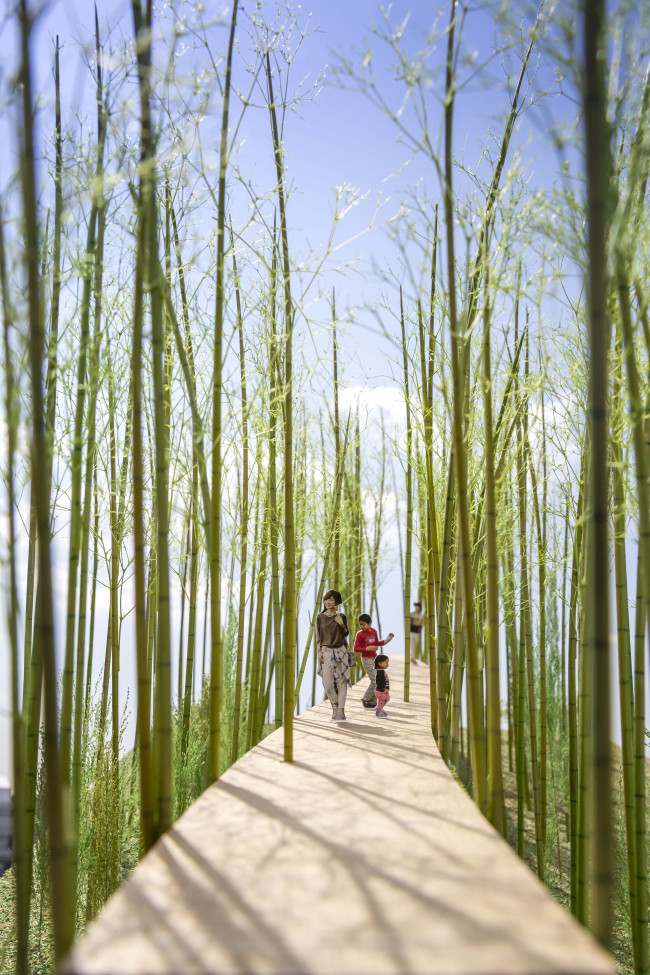 Digital rendering of the elevated walking trail proposed by Korean artist Choi Jae-eun and designed by Japanese architect Shigeru Ban. (Courtesy of artist Choi Jae-eun)
“The plan is to use the DMZ’s rich ecological heritage to solve more complex political issues between North and South Korea,” Choi said in a phone interview.

Her project “Dreaming of Earth” envisions the construction of a walking trail that hangs 3-6 meters above the ground so as to protect wildlife from humans and humans from landmines. On each end of the trail would be two ecological facilities -- an ecological library on the southern end and a seed bank on the northern end.

To realize the dream, she called on an old friend -- Japanese architect Shigeru Ban, winner of the Pritzker Architecture Prize in 2014 and known for his humanitarian work building temporary shelters with paper tubes and wood in natural disaster-struck areas.

Ban, speaking to Choi for the first time in 15 years over the phone, agreed to join hands.

“Ban was the architect who I thought could build things without damaging the environment in the DMZ,” Choi said on Nov. 8 at the Global Network Forum at the National Museum of Modern and Contemporary Art, Korea, where she and Ban together presented the idea to the public for the first time. 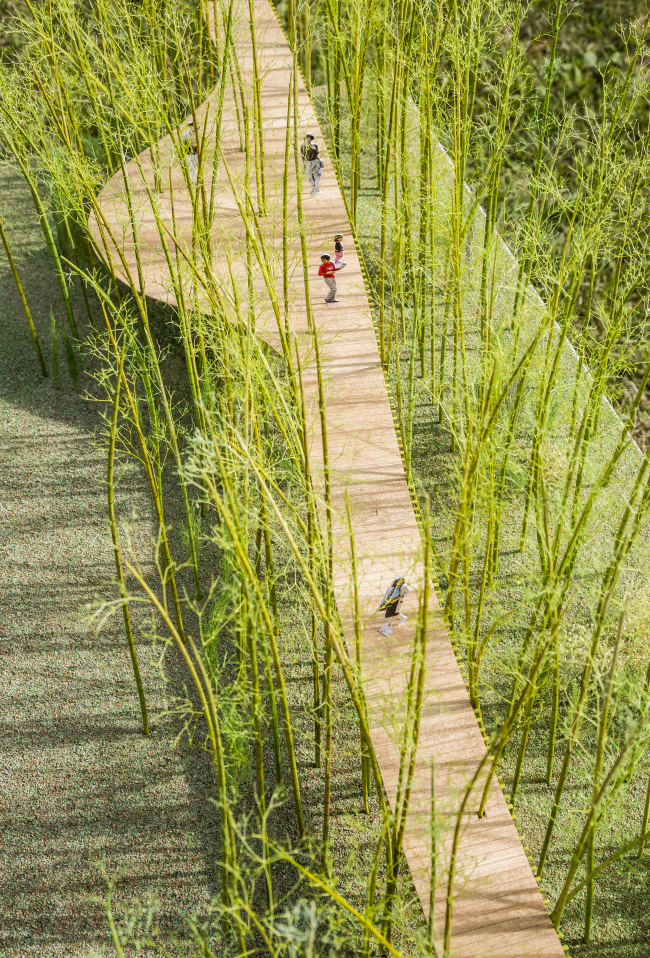 Digital rendering of the elevated walking trail proposed by Korean artist Choi Jae-eun and designed by Japanese architect Shigeru Ban. (Courtesy of artist Choi Jae-eun)
Ban laid out his plans for the trail and an observatory tower, both to be built with bamboo. If the plan is realized, it would be one of the most “natural” artificial structures ever built, he said.

He plans to plant bamboo saplings and wait for them to grow for about three to five years so that he can use the trees as support poles for the trail decks. The deck would also be made of dried bamboo, enhanced to add stability to the floor.

Although bamboo naturally grows in regions south of the DMZ on the Korean Peninsula, Ban expects the warming climate will eventually allow it to grow in the area. 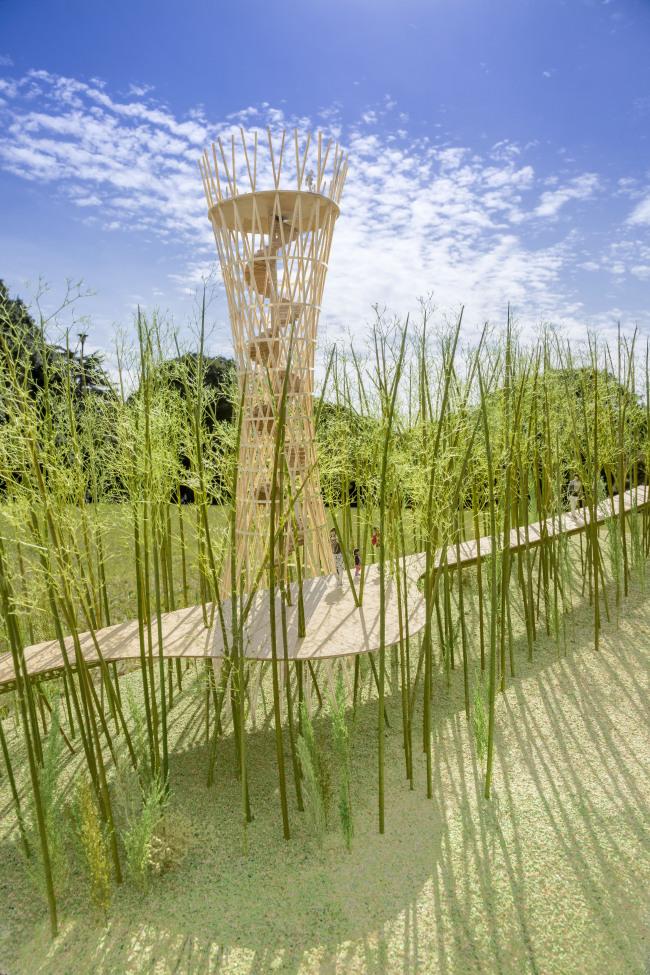 Digital rendering of the elevated walking trail proposed by Korean artist Choi Jae-eun and designed by Japanese architect Shigeru Ban. (Courtesy of artist Choi Jae-eun)
Ban has also planned the “Tower of Wind,” a 20-meter-tall landmark from which people can observe the surrounding landscape.

“Our testing shows the strength of bamboo is somewhere between wood and steel,” said Ban at the forum.

Choi has dealt with the issue of the division of Korea and unification in previous works of art. In 2000, she released the first film shot at the Joint Security Area in Panmunjeom, located inside the DMZ. In the movie “On the Way,” young actress Moon Geun-young, then 14, narrated a poem about her wishes for unification at the building where an armistice agreement was signed in 1953, ending the three-year Korean War in its current cease-fire.

Choi hopes to make the project a global one and invite more people to share ideas on the project and on unification of the two Koreas. Her next plan is to interview leading figures from around the world on the project and hear their thoughts. Choi wished not to disclose their names before the interviews begin in January. 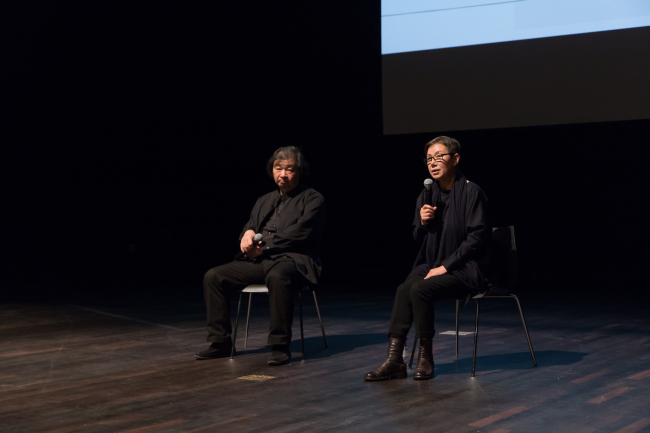 Shigeru Ban (left) and Choi Jae-eun discusses her “Dreaming of Earth” project at the Global Network Forum at the MMCA in Seoul on Nov. 8. (MMCA)
“These interviews with some of the world’s most influential people will make this project known to many people in the world,” said Choi.

“We hope this place (the DMZ) will be a ground where we can talk about the joy of reunion with the majesty of nature unfolding in front of us,” said Choi.