Its role has expanded to diverse areas of life, helping people live efficiently, safely and comfortably. It has brought innovations in all aspects of life, from consumption of products, living environment and use of technology to how we work in organizations.

“Design impacts everything around us. Design means adding creativity into every aspect of our lives, not just choosing the color and form of a product,” said Janne Kyttanen, a designer and pioneer of 3-D printing, in an email interview. 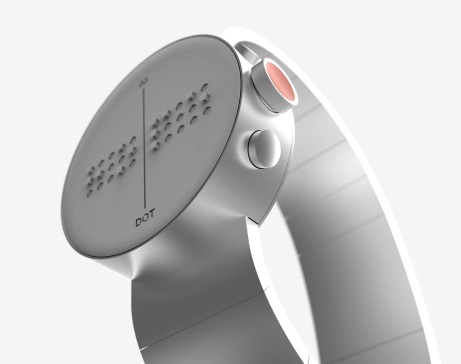 Smartwatch for blind people by South Korean startup dot (dot)
Kyttanen’s company 3D Systems is one of the largest 3-D printing companies, and is showing the world what the mix of cutting-edge technology and design thinking can bring about.

Ever since the world’s first 3-D printed dress in 2000, his company has enabled the production of various items, including mesh loungers, clothes, bags and accessories, just using their original materials and 3-D printers.

“I see all of my designs as ‘3-D content.’ They can be used in virtual or augmented reality platforms, made into miniatures for Barbie, used for visual effects in movies, or 3-D printed into crazy mash-ups at home,” Kyttanen, the creative director of 3D Systems, said.

On the other side of the design spectrum, gurus of design thinking are using their creativity to improve human conditions, tackling various social and economic problems that mankind faces today.

An example of this is Chinese architect He Wei’s 2013 project in the rural village of Xihe in China’s Henan Province. The impact of rapid urbanization in China has affected many rural villages where working-age people have migrated to cities, leaving behind the elderly and children. 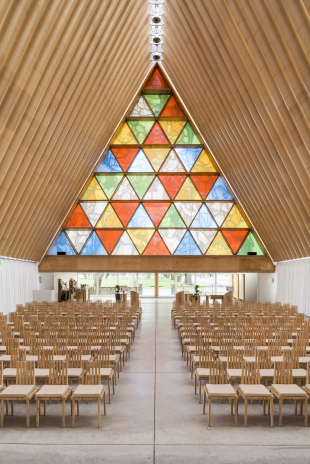 Cardboard Cathedral by architect Shigeru Ban (Stephen Goodenough)
The architect observed the 24-hour lifestyle of the villagers for a year. After the ethnographical observation, his team reached the conclusion that they needed to provide vitality to the village, before working to create any economic opportunities. He transformed an abandoned building into a public center where people could interact with each other through cultural programs.

The project chose Henan as the main study area, which is the most typical populous and agricultural province of central China. It continually studied and recorded the production and living situation of a small farmhouse for about one year,” wrote He in his introduction to the project in the catalogue of the Gwangju Design Biennale. The project is being showcased at the ongoing design biennale in Gwangju, South Korea.

Similarly, design thinking often leads to new ways of helping those with specific needs such as displaced people in disaster-stricken areas, or those with disabilities. 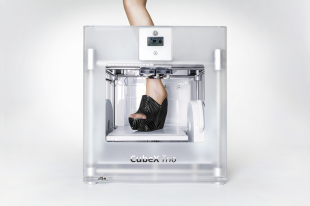 A wedge shoe made by 3D Systems’ CubeX printer (Janne Kyttanen)
Japanese architect Shigeru Ban, winner of the 2014 Pritzker Architecture Prize, is known for his humanitarian architectural projects. His temporary shelters and structures have given effective relief to people who lost their homes due to earthquakes, tsunami or civil war.

The architect built a temporary replacement for an Anglican cathedral in the earthquake-hit city of Christchurch in New Zealand using cardboard in 2013. Recently, he presented the prototype of a shelter for people whose homes were destroyed in the deadly earthquakes in Nepal this year. The shelter can be made with earthquake rubbles that fills in the walls held up by wooden frames.

South Korean start-up “dot” developed a smartwatch for the blind, allowing people to read messages and have access to the Internet in braille right at their fingertips. Kim Ju-yoon, cofounder and CEO of the company, said in an interview that most blind people rely on Siri’s voice to read messages on the iPhone, but the Dot smartwatch enables the blind to read text messages in braille that moves at adjustable speeds.

In this week’s Weekender, The Korea Herald presents some of the design world‘s most respected figures who will be coming to Seoul for next week‘s Herald Design Forum on Nov. 10.