There was no end to the standoff between Cheong Wa Dae and the main opposition as they clashed head-on over the controversial state-authored textbooks despite sitting down for a rare meeting at Cheong Wa Dae on Thursday.

Expressing frustration after the meeting, the New Politics Alliance for Democracy leaders took a jab at Park saying they felt as if they were facing a “gigantic wall” in their demand to scrap the textbook plan. 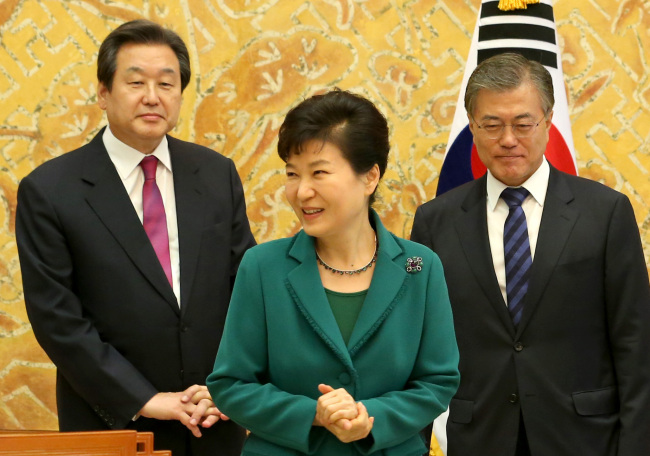 Moon said that the president remained steadfast to the notion that most of the textbook authors and historians were leftists and that they were denying the legitimacy of South Korea and should be ashamed of it.

“All in all, I really don’t know why she even called for this meeting,” Moon added.

Floor leaders of the two parties separately explained later that the participants, mainly Kim and Moon, had heated arguments over the textbook issue, and that Park offered her view from time to time.

They said Park mostly agreed to what Kim had to say and said, “We should not be teaching (our children) defeatism. (The plan) is to get this right.”

Park reportedly said the plan was aimed at ensuring the “correct” recognition of Korean history for future generations. She also expressed regret over the opposition leader’s allegations that her efforts had become increasingly politicized.

“For national unity, we need a correct and proud history textbook,” Park was quoted as saying by her senior press secretary Kim Sung-woo.

The opposition party has been adamantly opposing her drive to issue the state-designated history textbooks that could be used to whitewash pro-Japan activities during the colonial era and the military dictatorships decades ago.

The Park administration, meanwhile, has been pushing for the plan, stressing the need to provide a balanced view of history through a single set of history books authored by government-designated writers.

Ruling party chairman Kim, for his part, supported Park, asserting that the claims of the planned textbooks’ bias were “nonsense.” He also said that the history textbook issue had to be handled by historians and experts and urged the opposition leadership to focus on the swift passage of bills aimed at reviving the economy.

Although there was little hope that the rival camps would reach a political breakthrough, the five-way talks ending with no agreement and is likely to further aggravate the political and ideological standoff as the country heads toward the general elections next year.

At the meeting, Park relayed the diplomatic achievements made during her trip to Washington last week and called for bipartisan support on her labor reforms and economic-related bills, saying they were crucial for revitalizing the nation’s sluggish economy.

The president also requested the party leaders to ratify Korea’s free trade agreements with China, Vietnam and New Zealand as soon as possible, and focus on creating jobs for the youth.

Moon, meanwhile, asked Park to push ahead with an inter-Korean summit and a dialogue between Pyongyang and Washington.

He expressed concerns over a failed transfer of U.S. fighter technology, saying that a parliamentary probe should be launched. Lee, at his side, said that an audit was needed along with a reprimand of those responsible.

Moon also urged Park to clarify her position on recent remarks by Prime Minister Hwang Kyo-ahn that South Korea could permit the entry of Japan’s self-defense forces to the Korean Peninsula.

“The prime minister’s remarks are highly inappropriate and also trample on our people’s pride,” he said. “I want the president to make it clear that it is impossible to have Japanese troops in our country under any circumstances.”

In response, Park reportedly said that what Hwang believed was irrelevant to what she was thinking, according to Rep. Lee.

Prospects of progress was bleak even before they met in the afternoon as Cheong Wa Dae and NPAD locked horns over the format and the scope of the meeting. The opposition party insisted on having its spokesman attend the meeting to record the entire conversation between the leaders, while the presidential office wanted to keep the gathering confidential, stressing the president wanted to have in-depth, heart-to-heart talks.

The NPAD pushed Cheong Wa Dae to accept its request by threatening to call off the meeting, but later yielded, blasting the office for being stingy with its request.