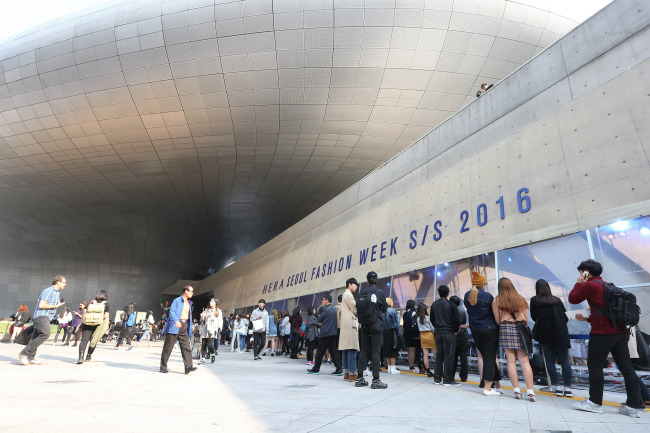 Seoul Fashion Week for spring-summer 2016 was held from Oct.16-21 at Dongdaemun Design Plaza in Seoul. (Yonhap)
Seoul Fashion Week is arguably the biggest and single most important event in Korean fashion. Held twice a year since 1997 -- once in spring and again in autumn -- it is an occasion for the country’s most visible designers to present their collections, offering style previews for the seasons ahead.

This year’s event, which ended Wednesday, was therefore a chance to check on Korea’s present fashion caliber and its potential. Sadly though, it showed that Korea fashion still has a long way to go, despite the ambitious plan of the government to promote fashion as the next driver of the Korean Wave, the popularity of Korean culture overseas.

Collections showcased during the SFW have become younger and more casual, indicating designers definitely had the youth --those in their early 20s or even younger -- in mind. Not all designers focused on young adults, but some of the popular ones loved by younger audiences opted for more casual looks.

Collections of designers who have shown consistent styles and pursued a high degree of sophistication and perfection throughout the seasons were missing. Some designers, whose collections have been praised for their quality and that contributed to maintaining the quality of the SFW -- such as Cy Choi and Jehee Sheen -- chose not to join the event this time.

The SFW may be the most effective incubator of young fashion talents, but its role as a springboard for midcareer designers to find a wider spectrum of customers and markets is losing its appeal.

Sadly, this has to do with the reality of the Korean fashion market and the positioning of the SFW in the global fashion week schedule.

Korean designers are overlooked in the local fashion market. Domestic shoppers prefer better-known Western brands to homegrown designers. Major Korean multibrand shops such as Boon the Shop and Koon with a View fill their stores with imported clothes and accessories of popular Western designer brands. There are just a small number of online and off-line stores selling Korean designer brands.

Are Korean designers selling more to foreign markets then?

That’s not the case either. The schedule of the SFW is late in the international buying calendar. The SFW is held at the end of the global fashion week schedule right after Tokyo Fashion Week, which this year was held from Oct. 12-18. Global buyers wrapped up their buying for the next spring and summer season in summer this year.

Most buyers say they come to the SFW to look for new trends for coming seasons, as Seoul is known to be at the forefront of trends. But sales are not promised at meetings between foreign buyers and Korean designers. Buyers say they are not confident that Korean designers are equipped to produce and distribute their products to foreign markets. Only a handful of designers, such as KYE, run a showroom in New York to reach out to foreign markets easily.

Buyers at the SFW look for unique pieces that cannot be found from European or American brands. That means most basic items are bought from Western brands. The opportunities for Korean designers to venture out overseas are growing very slim.

This pushes them to create low-budget, young, casual styles to have a competitive edge against Western brands in both local and overseas markets.

There were, of course, some notable improvements.

SFW’s new director, Jung Ku-ho, brought some financial relief to the event -- which has been struggling with a tighter budget -- by attracting the one-year sponsorship of cosmetics brand Hera. The Seoul Metropolitan Government, organizer of the fashion week, has been decreasing its budget for the fashion week for the past five years. This year’s budget of 2.7 billion won ($2.37 million) is down 500 million won from last year’s budget.

He revamped the tight timetable. There was at least a one-hour break between shows to give some time for buyers and the media to move to the next one.

The SFW came to a close with the announcement of a new selection of 10 designers -- “Seoul’s 10 Soul” -- who will receive financial and logistics support from the SMG to create collections and promote themselves overseas next year. It will be interesting to watch how the programs draw design potential from designers to build a more diversified and upgraded sense of Korean fashion.