[ The Korea Herald – Send E-mail ]
Seoul, Tokyo differ over Japan’s overseas military operations
By Shin Hyon-hee
Published : Oct 20, 2015 - 19:16
Updated : Oct 20, 2015 - 19:16
Despite their efforts to reboot security cooperation, the defense ministers of South Korea and Japan divulged a fault line over Tokyo’s possible exercise of its right to collective self-defense in a contingency on the peninsula during their talks Tuesday.

Han Min-koo hosted his Japanese counterpart Gen Nakatani, who arrived for a three-day stay primarily designed for his participation in the Seoul International Aerospace and Defense Exhibition. The six-day trade fair began early in the day at Seoul Airport in Seongnam, Gyeonggi Province.

With North Korea’s evolving nuclear and missile threats and three-way cooperation involving the U.S. topping the agenda, the sides discussed Japan’s envisioned exercise of its right to collective self-defense following its recent overturn of its pacifist constitution, which will enable its military to play a greater role. 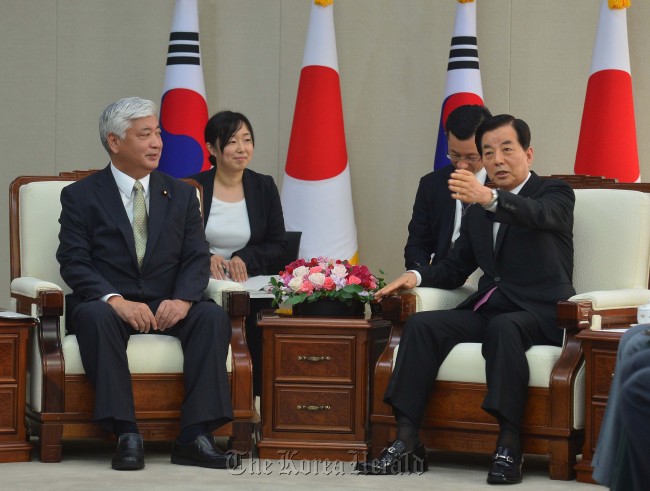 Defense Minister Han Min-koo (right) speaks with his Japanese counterpart Gen Nakatani during their talks in Seoul on Tuesday. (Yonhap)
After briefing Han on the new security law, Nakatani said that should the Self-Defense Forces see the need to operate off of their soil, Tokyo will seek consent from the country “under international law” and the principle will apply anywhere, including South Korea, officials here said.

In response, Han said North Korea is stipulated as South Korean territory under its constitution, reemphasizing that Tokyo ought to secure Seoul’s approval if the SDF was to enter the North.

Yet his counterpart simply replied that the issue should be discussed in the framework of the trilateral partnership including the U.S.

Their conflicting interpretations of the scope of the SDF’s operations on the peninsula highlight steadfast concerns over the former occupier’s military activities, which have been further fanned by the Shinzo Abe administration’s revisionist push and lack of repentance toward its World War II atrocities.

Controversy persists as Seoul is stepping up efforts to mend fences and reinforce bilateral security cooperation with Tokyo without receiving a sincere formal apology for the country’s imperial past.

Nakatani’s trip marks the first visit by Tokyo’s defense chief since January 2011, and came about five months after his talks with Han on the sidelines of an international security conference in Singapore.

“The two nations share security interests,” the minister said at the outset of the talks. “The bilateral security partnership should not stay in the region, but expand globally. Based on the perception, the two nations need to strengthen security cooperation.”

The resumed consultations came as the U.S. ramps up pressure on South Korea to defrost ties with its old foe and boost bilateral and trilateral security partnerships, such as through intensified intelligence sharing and logistics support, to better counter Pyongyang’s growing military threats amid an ongoing budget cutback at home.

Seoul, Washington and Tokyo sealed an arrangement to facilitate the sharing of their military intelligence last December.

South Korea also sent the 4,400-ton class destroyer Daejoyoung for the first time in 13 years to a fleet review that took place Sunday in waters off the Yokosuka U.S. naval base south of Tokyo.

During his trip, Nakatani was scheduled to join a welcome dinner for ADEX, visit Seoul National Cemetery and the border village of Panmunjeom and meet with a Korean War hero before returning home Thursday.