[ The Korea Herald – Send E-mail ]
Colorful season for men
By Lee Woo-young
Published : Oct 19, 2015 - 21:52
Updated : Oct 19, 2015 - 21:52
As Seoul has a reputation for trendy men whose devotion to fashion and skin care tops in the world, menswear collections by Seoul-based designers are some of the must-see shows at the ongoing Seoul Fashion Week. 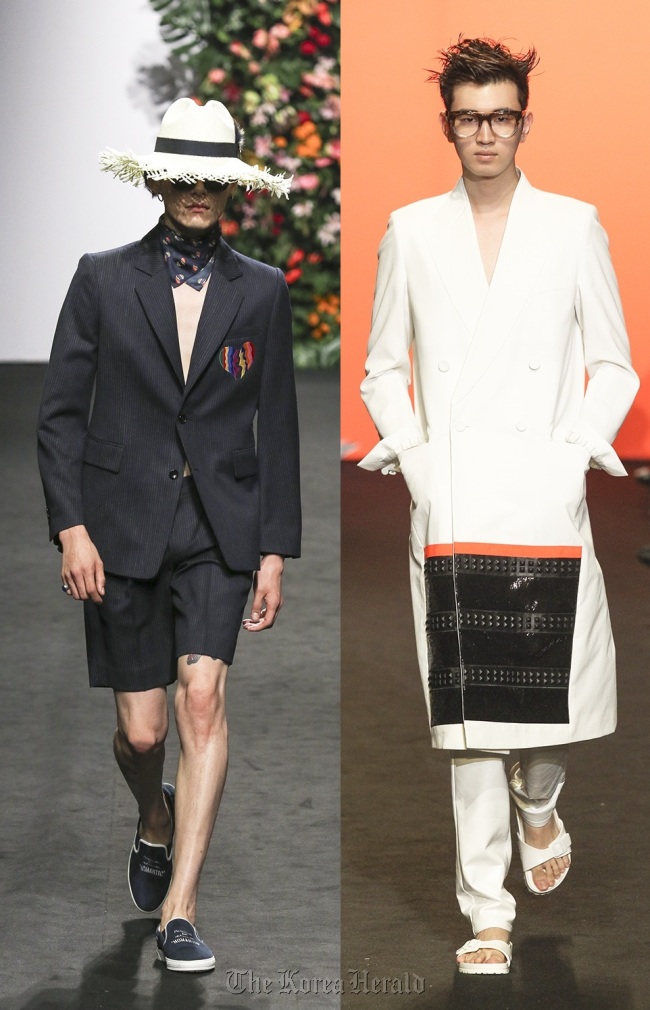 Beyond Closet (left), Helch es Helch (SFW)
Here are the highlights of menswear shows from Friday to Sunday.

One of the hottest emerging menswear designers in the Korean fashion scene, Munsoo Kwon presented light, sporty looks for the 2016 spring-summer season Saturday.

Inspired by some youngsters turning to fishing instead of finding office jobs, Kwon’s collection was a stylish guide for young anglers. Models walked comfortably in lightweight seersucker summer suits ― blazers and short pants. A towering baseball cap ― reminiscent of the bulging belly of a fish ― added humor to the otherwise usual men’s summer look. He gave accents to trench coats and suits with neon stripes, which Suzy Menkes, international Vogue editor, referred to as “K-pop colors” after the show.

“He was clever to use K-pop colors like stripes in this collection,” she said.

The sporty vibe ran throughout the show with sweatshirts and pants, featuring Kwon’s creative fishing-inspired prints. The prints proved again that he is a genius of creating witty symbols that embed his fun personality in his clothes. Cardigans featuring key prints for the 2014 fall-winter collection were a big hit last year.

Designer Go Tae-yong, one of the emerging designers with his signature playful, American preppy-style clothes, created a romantic paradise for men with a contrasting “Nomantic” theme, a satirical word coined by the designer to mean “not romantic.”

The show boasted a star-studded front row, attended by K-pop stars including Key of SHINee, Jisook of Rainbow, Moon Jun-young of ZE:A and Zion.T.

The designer kept the collection mood bright and playful as always, but symbols and patterns used hinted at a sad breakup. Broken heart prints were scattered on a navy sweater and white shirts matched with tailored pants. The prints seemed destined to become the designer’s next hit feature, following his previous popular cartoonish dog image on sweatshirts.

“I liked the colors, the texture and fabrication. I thought they were also fresh,” said Eric Jennings, vice president of Saks Fifth Avenue, after the show.

Designer Han Sang-hyuk’s creations for the 2016 spring-summer collection were reminiscent of prisoner uniforms from the 1973 movie “Papillon.” An oversized striped shirt matched with a striped prison hat with a string of tassel seemed to be his interpretation of a contemporary resort look for men.

Targeting fans of the “Star Wars” series, the designer showed a small capsule collection in time for the upcoming release of Star Wars Episode 7. Models in the Darth Vader and stormtrooper costumes were an entertaining introduction to the Star Wars-inspired basketball jersey collection.

Themed as “Creation of Adam” by Italian Renaissance painter Michelangelo Buonarroti, his collection showed a renaissance in neutral men’s fashion and its limited color palettes. Pastel pink and sky blue in chesterfield coats and trench coats warmed up the spring collection, which presented more relaxed silhouettes than his previous collections.

Bora of girl group Sistar took to the runway in a transparent chiffon skirt topped with a warm gray knit sweater as the sole female model.