The ministry commissioned the state-run National Institute of Korean History to exclusively author middle and high schools textbooks from 2017.

“I feel compelled to educate students with a textbook that is based on confirmed historical facts. The endless controversy (over history) has led to the inevitable introduction of state history textbooks,” said Education Minister Hwang Woo-yea in a briefing held at Sejong Government Complex. He added that there were limits to government efforts to right the errors, pointing out that authors of history textbooks who were ordered by the court to revise their books “caused social confusion” by appealing the case. 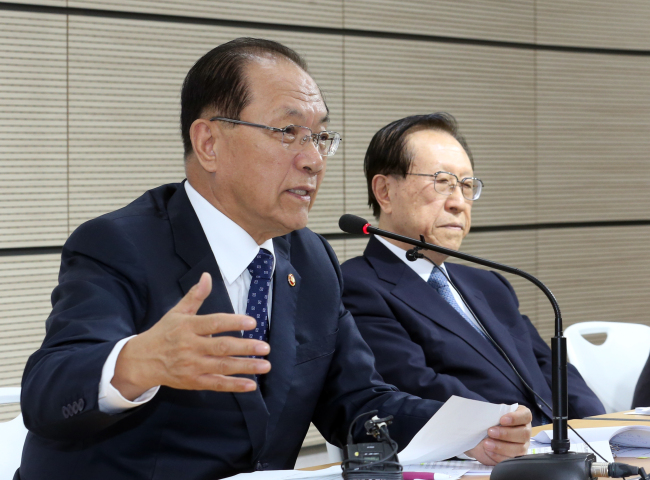 The government currently allows eight local publishers to author the history textbooks for secondary education and authorizes the books for use if they are up to standards. Elementary school history textbooks are already being authored by the state.

From 2002 to 2011, the Education Ministry gradually handed over the publishing rights to local publishers.

But in 2013, a dispute over alleged political biases of textbooks erupted. Liberals claimed that a government-approved textbook from Kyohak Publishing ― authored by several scholars publicly accused of being far-right ― was conveying an excessively conservative point of view. The ministry responded later by pointing out errors in seven other textbooks.

Last week, the ministry called the textbooks in question “reminiscent of a North Korean textbook.”

Hwang, who has stressed that students should learn from “one version of history,” said the current system fails to maximize diversity since some authors are reflecting their “ideologically biased views” in the textbooks.

Kim Jung-bae, the head of the NIKH, said although he himself had believed in the 1970s that the private publishing system was the right way for democracy, the ideological dispute of 2013 caused him to be concerned about the system.

Officials vowed that authors of the new textbook would be highly decorated professionals, but did not elaborate on how the NIKH plans on inviting historians ― many of whom vowed not to participate in writing the state history textbooks ― to contribute.

The government and the ruling Saenuri Party, of which both President Park Geun-hye and Hwang are members, have claimed that privately published textbooks have many factual errors and are politically biased toward those who are liberal or pro-North Korea. Saenuri leader Rep. Kim Moo-sung recently claimed that 90 percent of historians are leftists.

Rep. Kim Jung-hoon, head of Saenuri’s policy committee, said history textbooks should not be used as tools for the ideological wars of leftists.

The new textbooks are expected to reduce direct quotations of expressions used in the North, such as “seongun” politics, referring to Pyeongyang’s “military-first” policy. The conservatives have claimed such a depiction could instill positive perceptions of the North.

They are also expected to embellish the accomplishments of Korea’s industrialization and economic growth in the 1970s under the rule of former President Park Chung-hee, the father of the incumbent president, as current textbooks have been criticized by conservatives for focusing on negative aspects of the growth, including excessive dependency on exports and overseas markets.

“(The state-published textbooks) will narrate in a balanced manner the development of the Republic of Korea that prepared the foundation of the country postliberation (from colonial rule), established industrialization and democratization and achieved striking developments in various fields of science, culture and arts,” said Hwang.

The government’s decision to push ahead with the highly disputed measure has prompted a huge backlash from education circles, civic groups and the opposition, who said that state textbooks will result in a monolithic view of government-approved history.

Later in the day, the main opposition New Politics for Democracy retaliated against Hwang’s decision by recommending his dismissal to the National Assembly.

Those who oppose the decision have also raised suspicions that the Park administration may attempt to whitewash flaws of controversial figures like former President Park Chung-hee, who is criticized for his dictatorial rule spanning across the 1960s and 1970s.

“State history books give the country an excessive control (over education) and infringe upon the political impartiality stated in the Constitution,” A Network to Stop State Textbooks, a collaboration of 466 civic and education groups said in a joint press conference. “Not only does it violate the constitutional rights and several articles of international rights regulation, it undermines the freedom of expression.”

The NPAD accused Park of attempting a “historical coup” to introduce a textbook that justifies the dictatorship of her father.

“It is humiliating that the government and Saenuri are insisting upon what the rest of the world is moving against,” NPAD leader Rep. Moon Jae-in said. “The current textbooks were written based on standards made by the former Lee Myung-bak administration and was authorized by the Park administration itself. If they are biased, the government is responsible for it. Even if there are errors, they can reinforce the monitoring process.”

Moon suggested that the NPAD and Saenuri should discuss the matter before making it a policy.

Saenuri leader Kim dismissed the proposal, saying the issue is not subject to political discussion.