[ The Korea Herald – Send E-mail ]
Top interpreter reveals life in translation
By Korea Herald
Published : Oct 2, 2015 - 18:25
Updated : Oct 3, 2015 - 01:43
When Choi Jung-wha first landed in France in 1978, she was shocked by its liberal culture. Young couples kissed in the subway and cohabited without shame, petrifying young Choi, who grew up in a country then heavily controlled by the military dictatorship with conservative values.

The 22-year-old was a fresh graduate of Hankuk University of Foreign Studies, embarking on a graduate program of interpretation and translation at ESIT Universite Sorbonne Nouvelle Paris 3.

For the next 10 years, Choi channeled her studious passion to embrace the new surroundings, and became Korea’s first registered international conference interpreter, Asia’s first doctorate holder in the field and presidential interpreter between the two countries.

Aside from her professorship at her home university, Choi has written over 30 books, received the highest award in France, Legion d’Honneur, and founded a communications institute dedicated to promoting Korean culture around the world, which she runs as president. 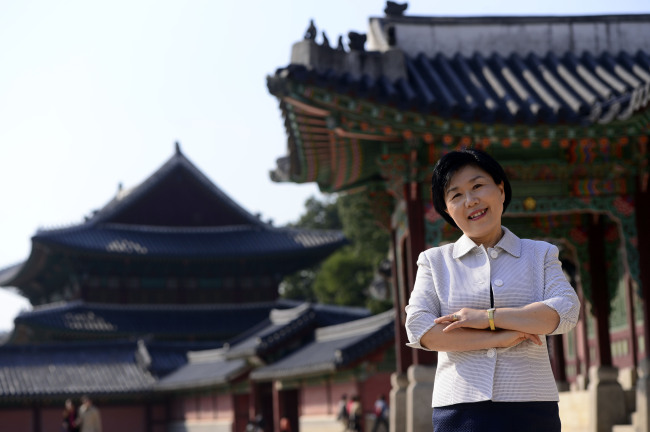 Hankuk University of Foreign Studies professor and Corea Image Communications Institute president Choi Jung-wha. The Korea Herald
“When I did my first interpretation for former French President Francois Mitterrand and Korean President Chun Doo-hwan in 1986, I was so nervous that I murmured, but no voice came out of my mouth,” she told The Korea Herald in an interview.

“There were also life-threatening moments, including interpreting inside a malfunctioning nuclear power plant in France, fully dressed up in a protective suit.”

When Choi started her career three decades ago, consecutive interpretation, where an interpreter regurgitates an entire speech, was the dominant practice. Over the years, the increasing scarcity of time made simultaneous interpretation more popular.

The latter is done by an interpreter translating a sentence before it is finished, after composing a “meaning unit” based on context and words. For a small number of people involved, “whispering” is used, she said, explaining that an interpreter communicates with clients from behind.

“Interpretation requires transmitting the subtlest of human emotions,” she stressed. “Therefore, a strong mother tongue is essential for anyone vying to be an interpreter.”

As there aren’t enough interpreters well-versed in Korean, the “bi-actif” method of two-way interpretation is commonly practiced among Korean professionals, she noted. 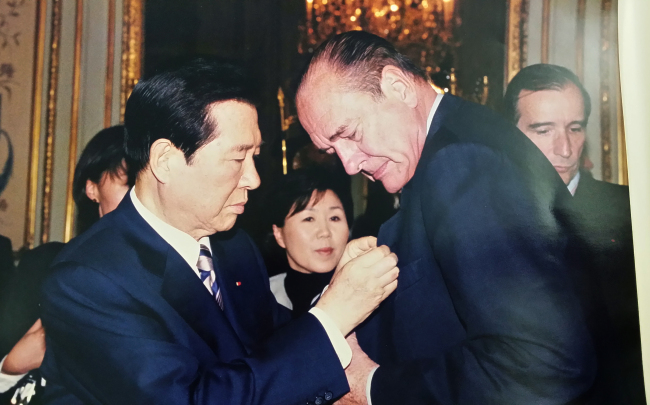 Then-presidential interpreter Choi Jung-wha poses between former Korean President Kim Dae-jung (left) and former French President Jacques Chirac during a state visit in Paris in October 2000. (Corea Image Communications Institute)
According to the academic, one big advantage of an interpreter career is being able to engage a wide spectrum of intellectual exercises, including chemistry, history, finance, cooking, music and weaponry. She also claimed that journalism was the closest vocation to interpretation, with both relying on communication and public relations.

Another advantage Choi noted was earning large amounts of money for a short duration of work. For one to six hours, a simultaneous interpreter in Korea takes home some $900, plus more for extra hours.

The professor said that despite the high financial rewards, the job was physically and psychologically demanding, calling for “extreme concentration, analysis, strength and spontaneity.” Choi personally sticks to a flexible regimen of swimming, jogging, healthy diet and deep sleep, not to mention an optimistic attitude.

There are in-house interpreters on one hand, who work either part-time, contract-based, or full-time as regular employees, and freelancers on the other, the professor said. At most interpretation schools, the vast majority are women, as they prefer part-time work to balance with family life.

In 2003, Choi established the Corea Image Communications Institute, a nonprofit organization registered under Korea’s Ministry of Foreign Affairs, which promotes Korean culture around the world. 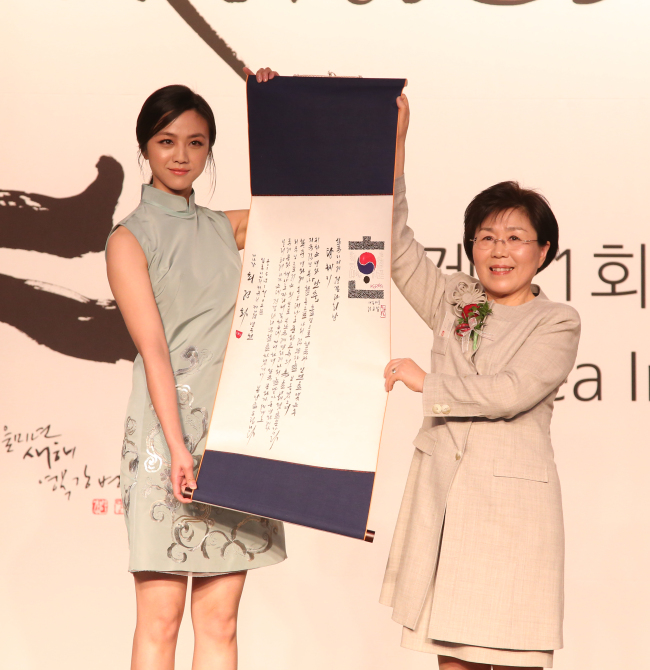 Chinese actress Tang Wei (left), is given a Stepping Stone Bridge Award by Choi Jung-hwa, CICI president and professor at Hankuk University of Foreign Studies. (CICI)
“Whereas my career revolved around the France-Korea relations in the beginning,” she said, “it has now become global, helped by my interaction with diplomats who are CICI members.”

Choi said her work was initially tied to the booming industries between France and Korea -- telecommunications, nuclear power, TGV high-speed railway and aerospace. But over the years, it has come to incorporate culture increasingly, buoyed by Korea’s economic and cultural globalization.

“When I went to Paris last month to mark 130 years of bilateral ties, I was guided by French staff speaking Korean,” Choi said. “I was told many times that there were so many French people eager to learn Korean language and culture, but there weren’t enough Korean teachers in France. I got many requests to send Korean teachers.”

While underscoring the growing cultural ties, the professor pointed to the blue ocean of possibilities overseas, contending that young Korean job seekers single-mindedly focused on the domestic market.

“In this globalized world,” Choi argued, “you have to be a pathfinder and explorer, finding and creating opportunities before anyone else.”

She urged young Koreans to pursue careers they desired. As Korean culture is becoming progressively known worldwide, she suggested that there were always areas where jobs were to be found, and even made.

Reflecting on the last 13 years of managing CICI, Choi said Korean culture had a “very distinct identity” that blended tradition and modernity dynamically. “Starting from dramas and music to fashion, food and architecture, we have uniquely fused our traditional identity with cutting-edge technologies,” she highlighted.

What Korea lacks in its cultural promotion, however, is “the attention to details” that can weld “hard” and “soft” elements impeccably to the finish, she asserted. “To do so, we need more creativity, sensibility and sophistication in all areas, from culture and education to industry and technology.”

“In France,” she added, “there is an association called ‘Comite Colbert,’” a gild of 75 French luxury brands that collectively promotes the industry. “Its guiding value is ‘Emerveillement,’ meaning utter wonder or awe.”

Similar to the Japanese artisans and masters who have refined their trade over generations, Choi said that Korea should aim for “emerveillement,” and make it sustainable over time.

“My ambition is to animate and fire up foreigners’ interest in Korean culture that has just been ignited,” she said. “To make it more delicate and enduring, that’s where I think hallyu’s next challenge lies.”