The Seoul Metropolitan Government said it will temporarily open the secret underground bunker of 790 square meters in Yeouido to the public from Oct. 10 to Nov. 1 on a reservation basis. The city will gather public opinion from visitors on how to use the mysterious site ahead of the expected official opening in October next year. 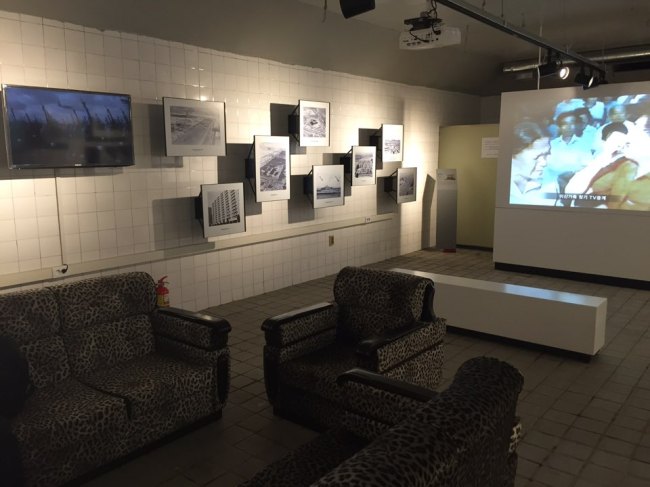 One of the bunker rooms, in Yeouido, Seoul, is arranged in its original setup in the 1970s complete with the sofa discovered at the scene. Photos and the video on the wall are displayed to show the history of the bunker. (Choi Jin-sung/The Korea Herald)
Accidentally found in 2005 during the construction of a bus transfer station in Yeouido, the site has remained mysterious, as no official records are left to indicate who constructed the concealed bunker and why.

The city, however, assumed that the bunker was used for security purposes for the president around 1977. The location of the bunker is where then-president Park Chung-hee stood during an Armed Forces Day event in 1977, officials said.

The secret bunker comprises a 66-square-meter room with a sofa, shower room and restroom and a 595-square-meter machine room.

Upon discovery, Seoul City designated the site as a future cultural asset in 2013, but actual monitoring and management have not been conducted.

The city will also strengthen safety measures and install a heating system before the official opening. During the on-site safety check in March, the bunker received a “C” grade, which indicated that the safety level was moderate and that it needs mild repairs and reinforcement.

“Based on public opinion over how to utilize the bunker, the city will make the site a civic space while preserving the historical characteristics,” city officials said.

About 1,200 citizens are expected to visit the site in the temporary opening event, they added.