A reform committee of the New Politics Alliance for Democracy demanded Wednesday that party chairman Rep. Moon Jae-in and other heavyweights should take the initiative to run for elections in constituencies where the ruling Saenuri Party has a strong foothold.

Most senior party members are resisting the call, saying it has nothing to do with party reform, but is an attempt to kick nonmainstreamers out in retaliation for their objection to the panel’s recent reform plan. 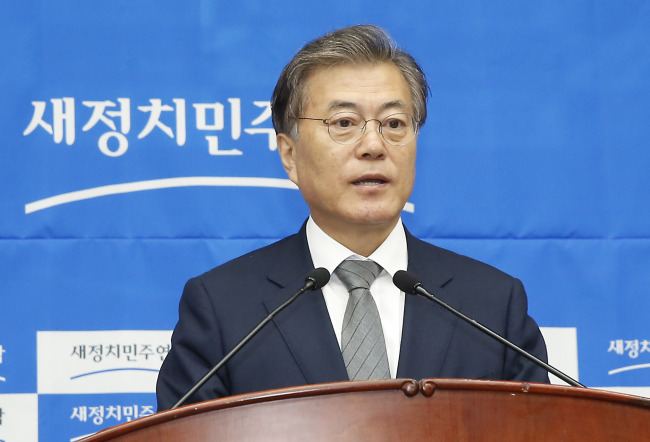 NPAD leader Rep. Moon Jae-in. Yonhap
Among the targeted heavyweights are incumbent and former chiefs of the NPAD and its precursors, such as Moon, former NPAD cochairmen Rep. Ahn Cheol-soo and Rep. Kim Han-gil and other party bigwigs who have served multiple terms as lawmakers.

Ahn said he could not contest in any district except his own because he had made a pact with his constituents to devote his political career to the district’s development when he entered politics.

Even Moon was reluctant to clarify his position on the proposal as he was asked to run from the Yeongdo district in Busan, the ruling Saenuri Party’s traditional stronghold where its chairman Rep. Kim Moo-sung was elected in a 2013 by-election.

If he wins another parliamentary seat in the Busan district, regarded as the most unfavorable spot for the opposition candidates, Moon could consolidate his position as a strong presidential candidate, but if not he might have to risk his political career, observers say. Saenuri’s Kim, for his part, refused to comment on the potential showdown.

Rep. Park Ji-won also rejected the reform panel’s demand to exclude candidates convicted of crime at lower courts from the nomination process. Park was convicted of bribery. He has appealed, and a final ruling is pending in the Supreme Court.

“Does the main opposition party give nomination authority to the prosecutors? Who has fought for the party at the forefront? I have played a significant role in mustering efforts to win elections and the presidency. I will definitely contest in the next elections,” Park said in a media interview Thursday.

Rep. Cho Kyung-tae, whose name was singled out by the reform committee, which describe him as someone who prompted conflict and undermined unity, denounced the committee, saying it managed the party’s affairs in a dictatorial manner without holding itself accountable for recent election defeats.

Cho was disciplined in July for describing the committee as the “elite guard” of NPAD leader Moon. The outspoken lawmaker is now under investigation his party’s ethics committee for saying that he “witnessed a collateral frenzy” during the meeting to endorse the reform measure.

Though the committee’s proposal is not enforceable, it is widely expected that the proposal will bring a sweeping shake-up of the NPAD, as the committee has pledged to put the party back on track after its crushing defeats in the 2015 April by-elections and the factional battles that followed.

“In order to shatter the party’s factionalism and some lawmakers’ dominance, those who are in charge should fall on their swords for the party and put the party’s interests before personal gain,” Kim Sang-kon, the chairman of the NPAD committee, said Wednesday.

Meanwhile, Saenuri Party leader Kim downplayed the impact of the NPAD reforms. He highlighted that his party’s drive for open primaries -- a nomination system that allows citizens to vote on who runs as a candidate -- would be a bigger political reform than the NPAD’s shake-up.

“The NPAD’s plan is to change people. Even though (Korea’s political parties) have done it a lot, I don’t think we have achieved advancement in politics. We should change the system. We think changing the system is a reform while they think changing the personnel is a reform. This is what makes us different from them,” said Kim.