In Korea’s turbulent path toward independence and nation building, there were foreign nationals who stood steadfastly by the Korean people, although their contributions have been largely overshadowed by those of Korean patriots. The Korea Herald, in partnership with the Independence Hall of Korea, publishes a series of articles shedding light on these foreigners, their life and legacies here. The following is the fifth installment. ― Ed.

Few Koreans would doubt that the journalist who left the greatest impression on Koreans was Britain’s Ernest Thomas Bethell. He came to Korea in order to report on the Russo-Japanese War, but ended up publishing three newspapers in Seoul. He first founded the Korea Daily News in 1904, the largest newspaper in Korea during the turbulent time leading to the forced annexation of Korea by neighboring Japan in 1910. Bethell even risked his life in reporting to the world the brutality of Japan’s colonial rule that he witnessed. “Even though I die, the Korea Daily News must live forever to save the Korean nation,” he said with his last breath.

Bethell was highly influenced by his father, a businessman and merchant, and his mother, who was brought up in a missionary family. He spent his childhood and youth in Bishopston, in the northern part of Bristol, England. At 16, he went to Japan upon completing his education.

Bethell engaged in trade in Kobe for 15 years. He enjoyed sports and music and was a good chess player. He had an active tenure as secretary-general of an athletics club, completing the construction of a new boathouse and a holding a large-scale regatta competition. 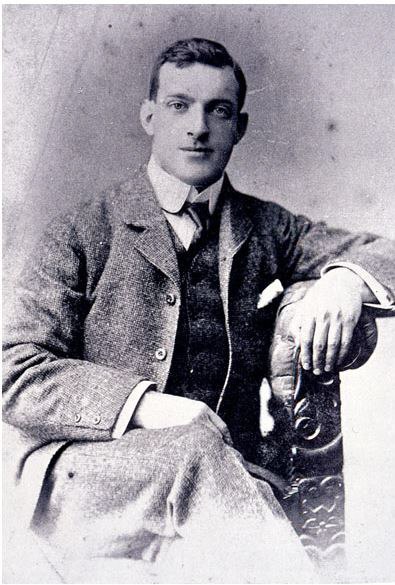 Bethell in Kobe, Japan, in May 1899 (Independence Hall of Korea)
After coming to Korea, he gallantly fought against Japanese aggression in the press, with his life coming to an end at the age of 37. He was laid to rest in the Yanghwajin Foreign Missionary Cemetery in Seoul and is remembered by Koreans as the “vanguard of the anti-Japanese press.”

The Russo-Japanese War was not solely the problem of Russia and Japan, but an important trigger in reshuffling the international order of Northeast Asia based on national strength. Japan, drunk with victory in this war, intervened deeply in the domestic affairs of the Korean Empire (1897-1910) while beginning its colonization in earnest.

Bethell entered Korea amid this troubled atmosphere with the goal of reporting on the Russo-Japanese War to the Western world. Japan, however, did not keep its promises to Bethell. Thus, Bethell issued three language editions of the Korea Daily News ― Korean, English and Korean mixed with Chinese characters ― reporting about Japanese aggression. American Homer Bezaleel Hulbert, who had been working in the publishing business as an editor of the Korea Review and as resident Korea correspondent for the Times of London in 1903, helped in the production of the English edition.

The Korean Empire was in a state of desperate crisis from the Japanese intervention in its domestic affairs. The Japanese Residency-General wielded absolute power, and the Japanese army censored all newspapers before print, suppressing anti-Japanese dissent. But Bethell’s nationality as a British citizen prevented the Japanese imperialists’ censorship and seizure of his publications, which allowed the Korea Daily News to act as a base for the secret anti-Japanese body New People’s Society, and played a pivotal role in the 1907-1908 National Debt Repayment Movement, a grassroots campaign to raise funds through donations to repay the country’s debt.

Around the time of the 1905 Eulsa Treaty between Korea and Japan, which denied Korea’s sovereignty and set the stage for the 1910 annexation of the nation, Jang Ji-yeon wrote the famous editorial “I Wail Bitterly Today” in the Capital Gazette. The Japanese immediately arrested Jang and suspended the newspaper’s printing. The Korea Daily News wrote a follow-up article on the issue of the forced treaty. It was at this time that Yang Gi-tak resigned his government position to focus on running the Korea Daily News.

The anti-Japanese tone of The Korea Daily News grew stronger day by day. The Nov. 27 extra edition of the same year published “The Full Story of the Conclusion of the Eulsa Treaty” translated into traditional Chinese in one page and the “I Wail Bitterly Today” editorial in English on another, letting people around the world know the full account of the forced conclusion. The Japan Chronicle published the full text of the editorial for the Western world, and F.A. McKenzie also reprinted the editorial in his memoir “The Tragedy of Korea” in an appeal to global public opinion.

Meanwhile, Korean Emperor Gojong sent secret letters about the injustice of Japanese aggression in Korea to countries the world over, appealing to public opinion across the globe. One letter reached Douglass Story, a journalist at the British Tribune, and was reported also by several newspapers over the course of a year. This was done alongside quite frequent exchanges with the English edition of the Korea Daily News.

The paper also reported on the militia movements throughout the country in detail, exposing the cruel atrocities committed by the Japanese army’s merciless retaliation against the Korean militia. This greatly motivated McKenzie to describe the situation of the militia in vivid detail with the intention of alerting the Western world.

The National Debt Repayment Movement for “Building an Independent Nation through the Settling of the National Debt” was launched in early 1907. The newspaper took the lead, and became the central institution promoting the movement. In so doing, the newspaper rapidly grew through the event, printing a new Korean edition of the paper in May, advancing the enlightenment of the masses. With a run of 10,000 issues, it received a substantial response.

The high credibility of the paper exercised an enormous influence in rousing anti-Japanese consciousness among Koreans. When Emperor Gojong abdicated the throne due to the Hague Secret Emissary Affair, the Japanese believed that high casualties resulting from the ensuing bloodshed were from the Korea Daily News’ inflaming Koreans. In no time, they began fomenting a full-fledged plot for Bethell’s immediate deportation.

To Japan, Bethell was an obstacle to its colonization of Korea. Hence they persistently pressed the British government to deport Bethell and force the discontinuation of his newspaper. The diplomatic negotiations between the two governments continued for almost seven years from 1904 to 1910. The British government put Bethell on trial twice following the Japanese government’s demands and its independent judgment.

On April 11, Japan sent a memo to the British Embassy in Japan and began its full diplomatic offensive. The first judgment from the British Consulate-General in Korea sentenced Bethell to six months of probation on Oct. 14, 1907. After a year passed, the Consulate-General passed a second judgment on Bethell on June 15, 1908, extending his probation by a further six months.

While Bethell was serving his sentence in Shanghai, the Japanese Residency-General put its new plan to suppress his newspaper and staff into action. It arrested the paper’s manager, Yang Gi-tak, under charges of embezzling funds for the National Debt Repayment Movement. The arrest of Yang, who oversaw the running of the paper, was meant to deliver a fatal blow to the paper’s production.

This incident concluded with the Seoul Court declaring Yang innocent. Although it took about 70 days, it resulted in a tense standoff among diplomats. The British Consulate-General strongly protested Yang’s arrest and demanded his release.

Although the residency-general arrested Yang, they cast suspicion upon Bethell for the embezzlement of the funds for the National Debt Repayment Movement. This psychologically burdened Bethell and greatly damaged his honor.

The complicated diplomatic negotiations between Britain and Japan were settled for the time being with the acquittal of Yang. Of course, the fundamental issue remained unresolved. Japan could not let the matter rest insofar as the Korea Daily News remained in British hands and continued publication. Their worries changed dramatically with Bethell’s sudden death, whereupon they purchased the paper from Arthur Marnham, his British secretary.

In May 1919, at the age of 37, Bethell died of natural causes and was buried in the Yanghwajin Foreign Missionary Cemetery near the Hangang River in Seoul. Funds to erect a memorial for him were quietly gathered starting in the following April. Although there were no advertisements for donations, overseas Koreans in Vladivostok, Russia, donated a significant sum to the Korea Daily News. Yang Gi-tak, Sin Chae-ho, Jang Do-bin and countless unnamed readers throughout the country willingly gave small sums and the memorial was erected in June 1906, one year after Bethell’s death. 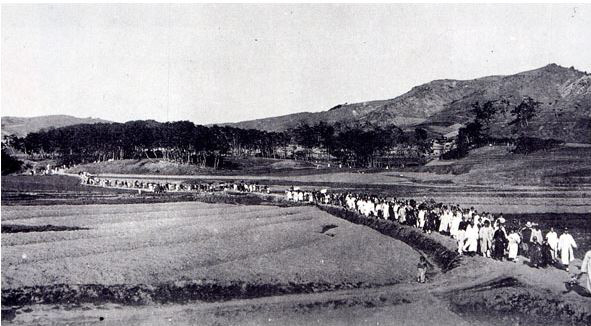 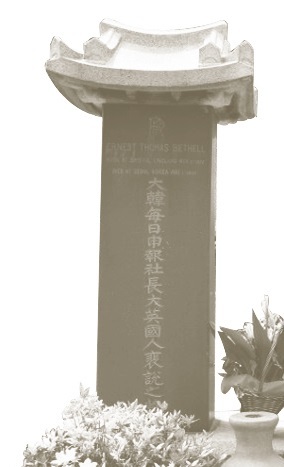 The epitaph recorded the spirit Bethell had shown as an anti-Japanese journalist, and ended thusly: “How lofty, how noble his spirit and his heart are. Ah! May this monument shine on for posterity.” Even after his death, the Japanese feared Bethell and wiped away the epitaph. After liberation, journalists all over the country gathered contributions and erected a small memorial as part of a commemoration for the Newspaper Day holiday in April 1964.