[ The Korea Herald – Send E-mail ]
[Herald Interview] ‘Angry Painter’ a dark, confusing depiction of humanity
The latest film from Jeon Kyu-hwan is difficult but leaves a strong impression
By 원호정
Published : Jun 26, 2015 - 19:24
Updated : Jun 26, 2015 - 19:26
Director Jeon Kyu-hwan is known for his propensity to create films that reveal the dark underbelly of modern society. Focusing on those who have been marginalized by society due to their origins or economic status in his “Town” trilogy and other films, Jeon’s camera has never hesitated to pull back layers and lay hardships bare.

That particular brand of social critique is muted for his latest film “Angry Painter,” a Korea-Estonia collaboration marketed as a “vintage nude action” film starring actors Yu Jun-sang and Moon Jung-won. In a conversation with The Korea Herald in a cafe in Seoul, the director said that his focus in this film was on exploring new genres and developing a particular mise-en-scene.

“I wanted to do a genre that I’ve never done before. I’ve done romance, drama and fantasy. I haven’t done action or comedy. I wanted to make a vintage action film, with an old European feel.”

It’s difficult at times to follow the film, because the sequences are structured in an unexpected and jarring way. 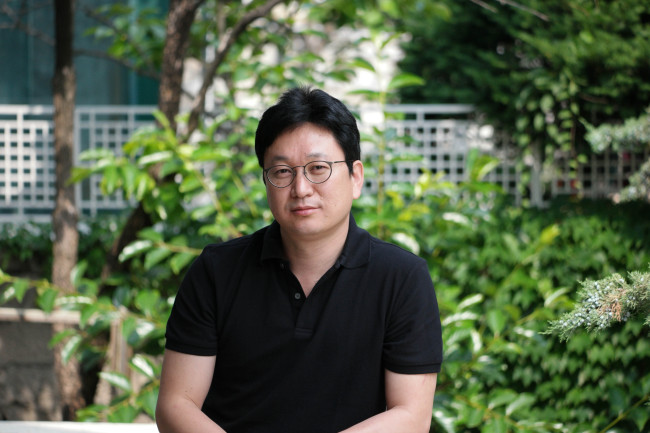 Director Jeon Kyu-hwan (Treefilm)
Jeon’s determination to create something new has earned him the reputation of being the director in Korea with the most number of works rated “inappropriate for screening” by the Korea Media Rating Board. With “Angry Painter,” Jeon says, he beat the board to its punch.

“I censored myself with this film. It’s terrible. Creators should never do that, but I did,” he said, shaking his head. “Look, I made a film that was meant for adults. And there’s nothing that I thought was inappropriate for adults to watch. But I knew it was going to be a problem, so I cut out and blurred scenes before the rating. It’s heartbreaking.”

“Angry Painter” is about a painter and driver (identified by their jobs rather than their names), a duo that hunts down the despicable predators in the dregs of society, slices them open, and steals their organs to give to sick children awaiting transplants.

Those being punished in the film are drug lords, pimps, and human traffickers, and their horrific crimes are depicted with very little left to the imagination. The grisly world is draped in hues of gray and red, with ’80s-style soul music playing on the soundtrack, creating a foggy and terrifying setting. “I wasn‘t trying to portray some kind of bleak dystopia,” Jeon said. “That’s the world we live in.”

The Painter depicted by Yu Jun-sang is an angel figure sent by God to do his will. When asked why an angel figure commits such violent crimes, Jeon answered, “When God punishes people, he does it in a cruel, violent way. He drowns them in floods or burns them.”

But he is not cruel to everyone -- the Painter saves the life of the drug-addicted Driver, who then becomes an assistant of sorts.

“The Driver has complete and total trust in the Painter, almost religiously so,” Moon Jong-won, the actor who played the Driver, told The Korea Herald. “He is very close to representing what I think of as being ‘human.’ He tries to do his best, but there’s always something a little heartbreaking about him. He’s not a bad guy, but he sometimes does bad things.” 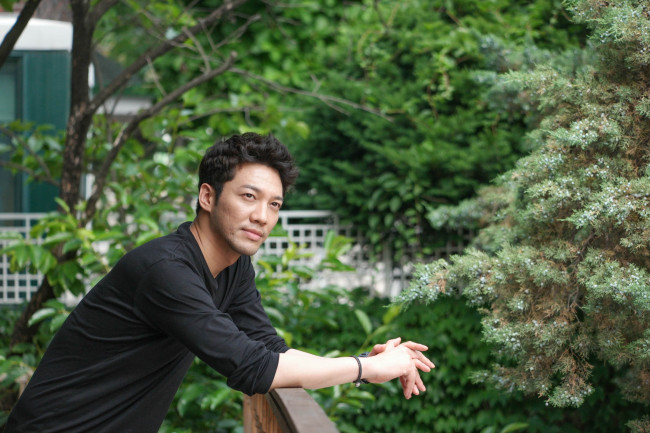 Actor Moon Jong-won (Treefilm)
For the role of the Driver, Moon was asked to gain a large amount of weight. “The simplest reason for that was contrast,” Moon said. “The Painter had a toned, controlled body while I lumbered around like Frankenstein, or the hunchback. In order to portray the Driver’s core innocence, he had to have a strong exterior. I wanted him to be a character that craved love and acceptance, despite what he looked like.”

“The Driver was unlike any character I had ever played,” Moon said, “but he’s oddly the most realistic. He shows the kind of violence you see in real life, that we all know about but never portray.”

“I hope the movie will be like a mirror,” said Moon. “There’s no central message or even plot. It’s just a depiction of the gray areas where we all live, like a documentary. I hope people will feel challenged to ask themselves if they’re really honest about who they are, and how they live.”

“Angry Painter” opened in local theaters on June 18. The uncensored Director’s Cut will be screened at the Bucheon International Fantastic Film Festival.