[ The Korea Herald – Send E-mail ]
[Herald Interview] Herald Philharmonic returning with dynamic repertoire of classical and fusion
By Korea Herald
Published : May 25, 2015 - 18:49
Updated : May 25, 2015 - 18:49
Looking to fill the month of May with the varied sounds of comfort and artistic intricacy, conductor Kim Bong-mee is gearing up to lead the newly established Herald Philharmonic Orchestra in its upcoming classical summer performance on Wednesday night.

“The month of May not only marks the 62nd anniversary of our company (Herald Corp.), but is also considered the month for families,” said Herald Phil conductor Kim. 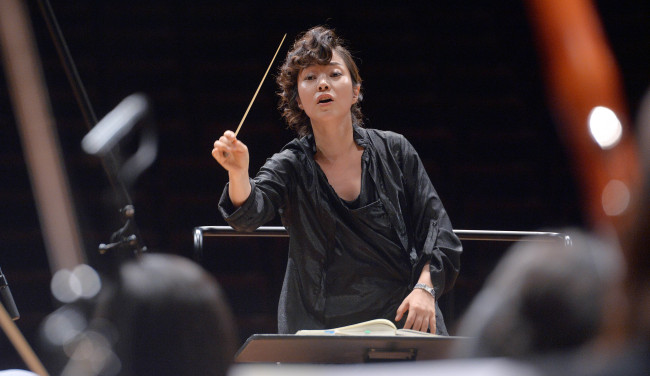 Kim Bong-mee conducts the Herald Philharmonic Orchestra during its debut concert performance at Seoul Arts Center. (Korea Herald file photo)
“So we decided on a program that that will appeal to people of all ages and one that is both sentimental and entertaining.”

The concert will open with Mikhail Glinka’s Russian libretto opera overture, “Ruslan and Ludmilla,” followed by three opera arias from Gaetano Donizetti’s comedic melodrama tale, “L ’Elisir d’amore.” The performance will not only highlight the sounds of the orchestra, but will also feature a key vocal component with the arias being performed by an operatic trio comprised of soprano Kim Kyung-ran, tenor Jeon Byung-ho and baritone Lee Jung-geun with Kim Yong-bae on the piano.

“Starting from the opening prelude, the concert will have a very familiar and comfortable feeling for the audience,” said the conductor. “With this they will be able to get a small taste of these love enthralled opera arias through beautiful vocal performances.”

In the second half of the concert, the atmosphere will pay candid homage to the traditional roots, with the Herald Phil unveiling its renditions of two classical Korean pieces: Cho Doo-nam’s “A Mountain Village” and Ahn Jung-jun’s “Ari Arirang” ― a beautifully moving opera cantata reinterpretation of Korea’s most time-honored folk song, “Arirang.”

Taking yet another musical twist, the conductor has chosen to close the night in a bold move with the jazz-fusion-inspired movement of American composer George Gershwin’s most iconic composition, “Rhapsody in Blue.”

The performance will then be followed by what Kim refers to as the night’s piece de rsistance ― Nikolai Rimsky-Korsakov’s 19th century symphonic poem, “Symphonic Suite ‘Scheherazade,’ Op. 35.”

“In this upcoming show, the main piece for the orchestra is ‘Scheherazade.’ The audience will be able to acutely witness the skill-range of our orchestra members,” she said. “We will also highlight a number of individual musicians during the performance of the piece, which has an extremely high degree of difficulty.

“In this short period of time, I plan to once again fully show the talent of the Herald Philharmonic Orchestra through a dynamic and fun program that will touch our audience,” she added.