“The celebration of ‘100-days into the relationship’ culture (where men and women buy and wear identical rings) is very interesting and very promising. We say why not 200 days? 300 days?” Srun said in an interview with The Korea Herald on Thursday. Srun came to Korea to speak at the International Luxury Conference 2015 as the author of the bestselling book, “Vendre le Luxe (Selling LUXURY).“

Males not afraid of wearing jewelries makes the Korean market even more special, he said. 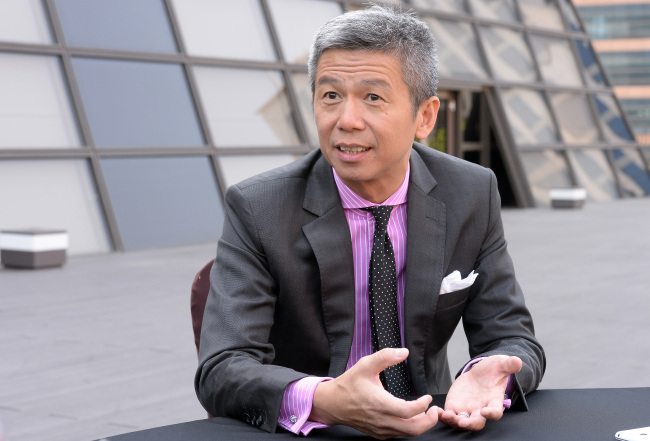 Francis Srun, managing director of Asia-Pacific at Boucheron, talks to The Korea Herald on Thursday at the Millennium Seoul Hilton Hotel. (Ahn Hoon/The Korea Herald)
“In Europe and many other countries, males do own jewelry, but they are limited to certain items, such as a simple wedding band, and limited to certain materials, like silver. But in Korea, males wear a lot of gold and even pair the same rings and jewelry as their female partners,” he said, adding that Korean males tend to have an active voice in shopping for jewelry and actually care when they do.

Being a long-time observer of the so-called luxury industry ― he has previously worked for American fashion brand Ralph Lauren and Swiss luxury house Piaget ― Srun said Korea is already a mature market.

“The jewelry market is not a natural market because it doesn‘t sell necessities. You need to be educated on the process of jewelry-making, what is so important about the size, and everything,” Srun said. “Surprisingly, the more you get to know about it, the more you get attached to it and have the desire for it.”

“And Korean customers in that way are very much aware of this information and have the desire for real luxuries,” he added.

He said Asia is becoming even more important as it is the market where people still perceive jewelry as a means of self-affirmation. “In Europe the culture is shifting to be engaged in sports, arts, joining a rock group and other things for self-affirmation, but in Korea, in the Asian urban environment, what I wear ― what bag, shoes and jewelry ― is ‘me,’” he said.

And in such a process, luxury shines, he said.

“Luxury is all about tradition and heritage. Boucheron was established in 1858 by Frederic Boucheron and has been managed by four generations of the family. Frederic Boucheron was the first person to have the audacity to use unconventional gemstones (in) the jewelry, and that is still valid and customers seem to know that,” he said.

“That’s something that many young makers cannot imitate. And that’s luxury,” he said.