[ The Korea Herald – Send E-mail ]
[Herald Interview] S. Sudan to benchmark Korean education
By Yoon Min-sik
Published : May 21, 2015 - 18:59
Updated : May 21, 2015 - 18:59
Less than five years since its independence, the fledgling state of South Sudan is looking to use education as the driving force on route to becoming a developed country, the country’s top official in education said.

“We want to transform our education into a modern system that meets all the requirements of society. Without education, there can’t be development,” said South Sudan’s Education Minister John Gai Nyuot Yoh. 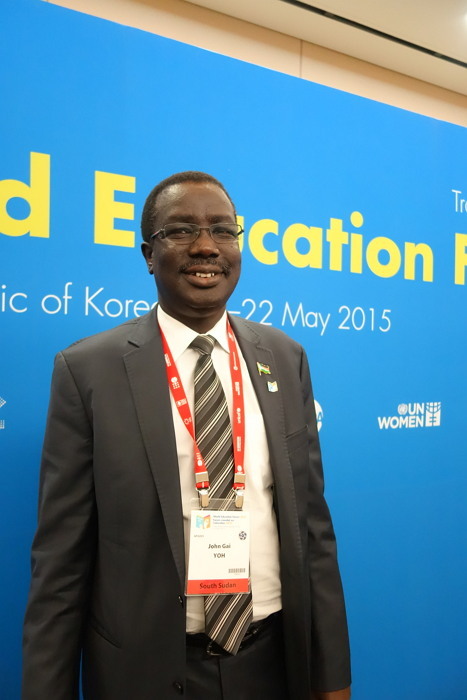 John Gai Nyuot Yoh. (Yoon Min-sik/The Korea Herald)
In order to achieve this, he said the country would take inspiration from South Korea, a country that transformed itself from one of poorest countries in the world to one of leading economies in Asia in a matter of decades

Yoh said South Korea could be the country’s “role model” as it seeks to evaluate and improve the curriculum.

“There are two ways to acquire human resources. Either bring in people from outside, or adjust your education to start building such resources,” he said, emphasizing the necessity of education.

Unlike Korea, the country has resources. But Yoh said South Sudan needed to teach its future generations the importance of education and not rely on resources, because resources can be used for the country’s benefit at any time.

Education, on the other hand, needs to be developed over time. The minister said his preliminary plans covered a time scale of at least 10 to 15 years.

“Our biggest goal is to provide quality education that is accessible. As of now, we have a literacy rate of 23 percent. We want to raise it to 60 percent,” he said.

“We have been discussing how we can make use of the Korean curriculum as a basis for enhancing and developing our education,” he said.