[ The Korea Herald – Send E-mail ]
[Herald Interview] Educating girls ‘way to end poverty’
By Korea Herald
Published : May 20, 2015 - 19:05
Updated : May 20, 2015 - 19:06
U.N. Women Executive Director Phumzile Mlambo-Ngcuka does not mince words when she talks about the education of young girls. “It is the right thing to do,” she said emphatically during an interview with The Korea Herald at a hotel in southern Seoul on Monday. Mlbambo-Ngcuka is in Korea to attend the World Education Forum 2015 being held in Incheon May 19-22.

For the developing and underdeveloped countries around the world, investing in women brings about fundamental changes in society, Mlbambo-Ngcuka argues. “It ensures they will make contributions as citizens,” she says, explaining that countries are compromising their own development when they do not educate women.

For example, educated women means better health management of the country, as lifestyle-related illnesses can be avoided and better immunization and nutrition of children can prevent illnesses. “Education of women has multiple benefits,” Mlbambo-Ngcuka says, concluding, “It is the only sustainable way to end poverty.” 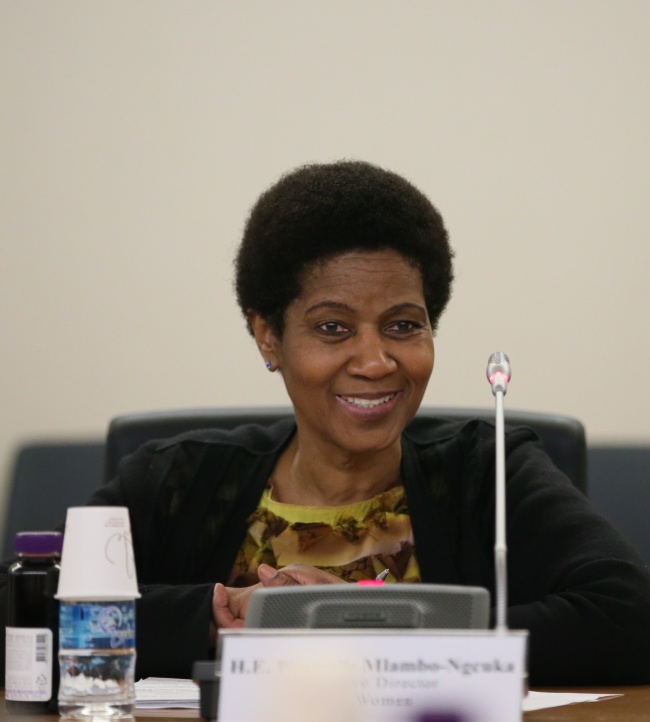 Phumzile Mlambo-Ngcuka. (Ministry of Gender Equality and Family)
One way to ensure education for women is to have more women in leadership positions, not an easy task in countries where women are not represented in the upper hierarchies of power. This is where governments need to step in. “There is no country where women’s leadership has increased without special measures, such as quotas. People think it is normal to be led by men only. We are finding that there is permanent affirmative action for men,” she says. A crucial element in getting women into leadership positions is encouraging and educating women to believe in other women and to vote for them, she explains, as women who are in leadership positions can be role models for other women.

Mlbambo-Ngcuka cites the example of a women’s battalion sent to Liberia to boost security there that has had a strong impact on the women of that country. “The number of women in Liberia who went into careers in the security field increased overnight,” she says, emphasizing the importance of role models.

As many more men are already in leadership positions, they can play an important role in the empowerment of women. “You need men who are gender sensitive. You need to make it a collective responsibility. Even when men have power, it should benefit both men and women,” Mlbambo-Ngcuka says.

Concerning violence against women in conflict zones, Mlbambo-Ngcuka called on the world leaders to make it their issue, pointing out that “the law enforcers are letting us down because they are not focused enough.”

Asked about the issue of Japanese military sexual slavery during World War II, Mlbambo-Ngcuka says, “It is an issue that is bigger than U.N. Women.” She adds, however, that while an international dispensation system is needed, it is important that the two countries ― Korea and Japan ― attend to the matter.