[ The Korea Herald – Send E-mail ]
[Herald Interview] The making of a hero
Chung Sung-hwa recounts rise to musical stardom
By Korea Herald
Published : May 19, 2015 - 18:52
Updated : May 19, 2015 - 18:52
On the stage of the Blue Square Theater in Seoul’s Itaewon, Chung Sung-hwa exudes the certain aura of a martyr. Standing tall in the spotlight, the actor sings with a deep and rich voice about the lofty ideals of pan-Asian peace to which he is about to sacrifice his life.

At least to those loudly applauding in the audience, Chung seems like the reincarnation of Ahn Jung-geun, a real-life Korean hero who assassinated Hirobumi Ito, a four-time prime minister of Japan and a key figure behind the country’s colonization of Korea, on Oct. 26, 1909.

Offstage, however, the musical “Hero” star is unassuming and pleasing, with a natural sense of humor. 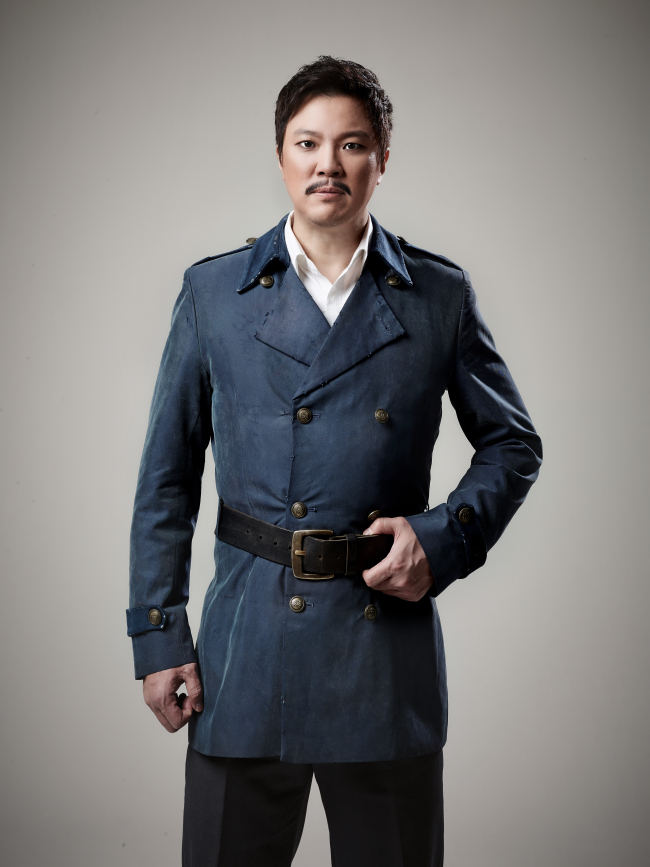 Chung Sung-hwa. (Acom)
One of the most sought-after actors in the local musical scene now and with a number of best-actor awards under his belt, he is very conscious about his comedian roots. He started out as a TV comedian at age 20, but after just two years, moved to TV and stage acting.

“Two-thirds of people in Seoul still know me as a comedian,” Chung, 40, said at a cafe across the street from the theater.

“Every time I go on stage, I think about the two-thirds of the audience who would see me as a ‘comedian trying a new path.’ I want to surprise them and prove to them that I belong here.”

His past role choices also reveal this conscious effort to establish himself as a serious, versatile actor.

In 2007, in his first lead role in a large-scale musical production, Chung played Don Quixote in “Man of La Mancha,” the musical version of Cervantes’ epic 17th-century novel. In 2009 followed the role of real-life patriot Ahn in “Hero.” Chung was Jean Valjean in “Les Miserables” for eight months in 2013 and last year the drag queen Albin in “La Cage aux Folles.” And now, back to the self-sacrificing hero in “Hero,” his seventh time playing the role.

Of all shows, Chung said “Hero” holds a special place in his heart. He swept local musical awards with the role, winning both critical and public acclaim.

“I am grateful that I had been cast. This show has given me so much and kind of lifted my career as a musical actor,” he said, adding that he hopes to continue for as long as possible.

While doing comedic gigs in his 20s, he felt that he wasn’t funny enough and lacked the so-called “star quality” to make it to the top. On TV dramas and films, his image as the ‘funny guy next door’ prevented him from expanding his acting career into a more serious realm.

On the musical stage, he feels he has finally found his place.

“There are moments onstage like when my emotion, music, the audience and everything else just fit perfectly into each other,” he said.

“The orchestra plays and I take a deep breath and start singing, then I get goose bumps. It’s just so magical and it is something that only I can feel.”