[ The Korea Herald – Send E-mail ]
[Herald Interview] ‘Abe unlikely to apologize in August speech’
By Korea Herald
Published : May 19, 2015 - 19:15
Updated : May 19, 2015 - 19:16
Japanese Prime Minister Shinzo Abe is unlikely to make any apology for his country’s wartime atrocities in a much-anticipated speech to mark the 70th anniversary of the end of World War II in August, a Japanese expert said.

Yoshihide Soeya, political science professor at Keio University, said that based on Abe’s personal belief that Tokyo’s past apologies were “excessive,” he may refuse to accept Seoul’s repeated calls to express its sincere contrition.

“I think if you expect that, you will be disappointed. I think that it is almost for sure,” the professor told The Korea Herald last week. “Making an explicit apology is against his personal will, but also even as a prime minister, he is not ready to go that far.” 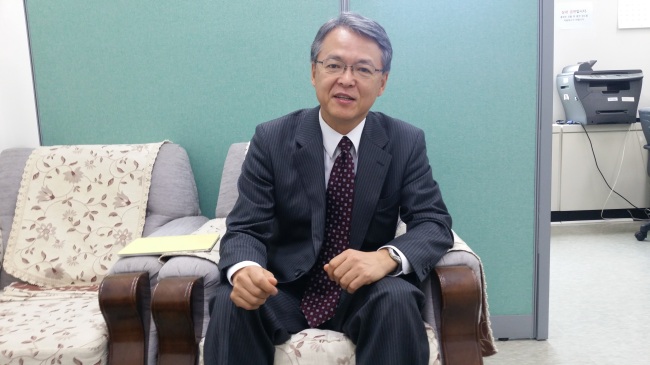 The scholar painted a negative outlook for the future political relationship between South Korea and Japan, noting that neither President Park Geun-hye nor Prime Minister Abe is willing to move first to address the drawn-out stalemate over history and territorial issues.

For their relations to move forward, the two countries should recognize the importance of bilateral cooperation, which would create incentives for both sides to seek a future-oriented relationship, he said.

Well-known for his extensive research on East Asian politics and Japanese diplomacy, professor Soeya has served as the director of the Institute of East Asian Studies of Keio University and on the Board of Directors of the Japan Association of International Studies.

The following is the full text of the interview with professor Soeya. ― Ed.

The Korea Herald: Prime Minister Shinzo Abe’s speech last month at a joint session of U.S. Congress frustrated Koreans as it did not include expressions such as colonial rule, aggression or any apology. What is your take on this? 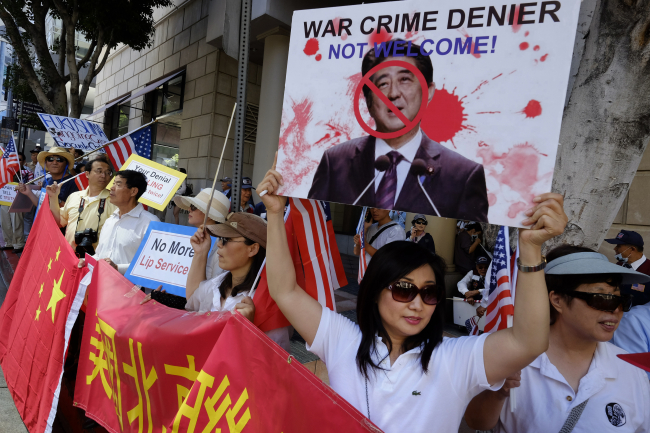 Korean-Americans, Chinese-Americans and other participants stage a rally in downtown Los Angeles on May 2 to demand an apology from Japanese Prime Minister Shinzo Abe for his country’s wartime aggressions and atrocities. (Yonhap)
Yoshihide Soeya: That was not a surprise. That’s expected. I think the same is true for his summer statement (to mark the 70th anniversary of the end of World War II). His position has been very clear from the beginning. I think the most important factor is his personal beliefs, which are not a secret. His views have long been that they (Tokyo’s past apologies for wartime atrocities) are a little bit too much, excessive. It is not that he denies the fact of the war or anything.

Domestic politics being a factor (keeping him from apologizing) … that is another myth, I guess. I don’t think he is behaving like that because of domestic politics. No. (He is behaving based on) his personal belief and that is the most important thing for him. Including Yasukuni visits, it is personal. No elements of politics.

KH: Would it, then, be wrong to expect that Abe is going to apologize in the August statement to respect the growing calls for a sincere apology?

Soeya: I think if you expect that, you will be disappointed. I think that it is almost for sure. So, he makes a compromise. For example, in a congressional speech, he said Japan inflicted suffering on Asians, and that sentence has made it clear who was the aggressor and who were the victims, and I think this was the first time for Abe to say that and make that relationship very explicit. That is a compromise and that is one step forward for him. So there may be another step forward in the summer statement.

KH: How do you think Abe will tackle bilateral issues with Seoul, including the wartime sexual enslavement of Korean women?

Soeya: I think Korea-Japan relations today ― it is often said ― are the worst in the course of history. In a way, yes, but not necessarily. If you look at the past evolution since 1965, we have made a lot of progress and we have come a long way. And I think how good it has become is mostly shown in the civil society relations. Relations between the two leaders may be the worst since 1965, as a result, that relationship is affecting, first of all, the political sentiment and atmosphere, which is unfortunately spreading into some other social sectors gradually. It is like gas spreading from the top of the mountain to the foot.

But I don’t think it has reached all the way down to the bottom and civil society relations are still not very bad. Those people who do not read newspapers and or do not watch TV, they don’t know about this and there are lots of them on the street. The majority of the general public basically do not care about what’s happening in the political relationship. Therefore, many Koreans keep coming to Japan. The Japanese number has decreased but they are still coming here. So my take is, if I can be explicit, I am afraid I have to say as long as the current two leaders are there, the prospects for the political relationship may not be good.

KH: How do you think South Korean President Park Geun-hye can improve the bilateral relationship?

Soeya: I think realistically speaking, (see) what happened between Japan and China in the Xi-Abe meeting. There was a compromise regarding the four points including critical issues. This is a typical diplomatic way of dealing with difficult issues. And diplomatically speaking, that could be a realistic way between Japan and South Korea to come up with some diplomatic way of dealing with these issues, and each side is free to interpret it according to its own needs.

But the question is if that is possible. In case of South Korea, the president’s own feelings should be very important but also possible domestic repercussions are very critical. Leaders become hostage to some extent, and mass media are a very important intermediary in that context.

And in the case of Japan, Abe has not become hostage to the domestic sentiment necessarily, but the basic fundamental gap between Tokyo and Seoul is that each side believes the problem lies on the other side. So Mr. Abe believes President Park is too stubborn, and she believes Abe has no readiness to compromise, so she doesn’t want to move. So neither side is ready to make a first step. Both sides believe the first step should be made by the other side and I think that is a stalemate.

Again, realistically speaking, some diplomatic way of dealing with the difference should be the way. But the comfort woman issue is the biggest issue. If there is some compromise struck regarding this issue, not necessarily calling for a resolution or anything, if they agree, for instance, on the future way of proceeding regarding this issue … that kind of a deal. If that is done, then of course top leaders do not engage in those kinds of negotiations. So it is a task basically for bureaucrats and secondly how mass media report that deal to the general public would also be very important.

KH: Do you think that there are any steps Abe is going to take first to improve bilateral relations?

Soeya: Many South Koreans say President Park Geun-hye is interested in improving relations with Japan. But without a significant first step from Japan, she cannot make a move and that is the dominant argument here. Again, the problem is that context is not understood as such in Japan, particularly in the prime minister’s office. Their view is the opposite ― the Korean side should soften its attitude. So therefore, again, realistically speaking, it is not very likely. I think the important point is whether or not both leaders really believe South Korea-Japan relations are important and why.

In a two-track approach, both tracks should proceed side by side. One should not interfere with the other. But today, the Korean approach is to do something about history and then let’s move on. To be very honest, I don’t think that is going to work. If Japanese side proposes this two-track, many Koreans would take it as a Japanese way of sidelining history issues. So that should be avoided. So, the point is that it should be explicit that both are important in their own rights and they should proceed on two tracks without one interfering with the other.

KH: But the problem is that people here in Korea tend to look at the two issues as one package rather than separating the two.

Soeya: I think that looks like a dominant perception. But personally, I really don’t know. The public may react positively. I think for the majority of the public, there should not be much problem about the two-track approach. Here, the question is whether you can control the very strong voice in your society. Even though they don’t necessarily represent the majority, their influence is bigger than their size. I think that should be managed. How to manage that is also an important element in a democracy. You should not be taken hostage. If they really believe that the two-track would proceed seriously, I think the public in both societies would eventually accept it even though there may be opposition. It is impossible to expect a 100 perecent consensus in a democracy. So it is a majority thing essentially.