[ The Korea Herald – Send E-mail ]
[Herald Interview] ‘Indian P.M.’s visit aims to cement Korea partnership’
By Korea Herald
Published : May 17, 2015 - 20:28
Updated : May 17, 2015 - 20:28
With evolving business ties and increasingly similar strategic perspectives on world affairs, South Korea is one of the most important Asian partners for India, according to India’s ambassador to Seoul, Vikram Doraiswami.

In an interview with The Korea Herald last week, the envoy noted that elevating India’s partnership with Korea was a crucial “prerequisite” to ensure the success of New Delhi’s “Act East” policy ― a core foreign policy initiative to deepen the country’s engagement with East Asian countries.

Indian Prime Minister Narendra Modi’s two-day visit to Seoul on Monday will be aimed at advancing the initiative by deepening the India-Korea relationship, which they seek to diversify to bolster cooperation in areas including defense and culture, he said.

“We (India) also want to increase our ties with Korea in every sphere of government activity ― including defense, science and technology, and culture ― and also through a sustained effort to build people-to-people ties” said Doraiswami.

During Modi’s stay here, the prime minister will explore “mutually-beneficial” business opportunities and seek to promote his “Make in India” drive ― aimed at bolstering India’s manufacturing sector ― through his meetings with South Korean entrepreneurs, the ambassador said. 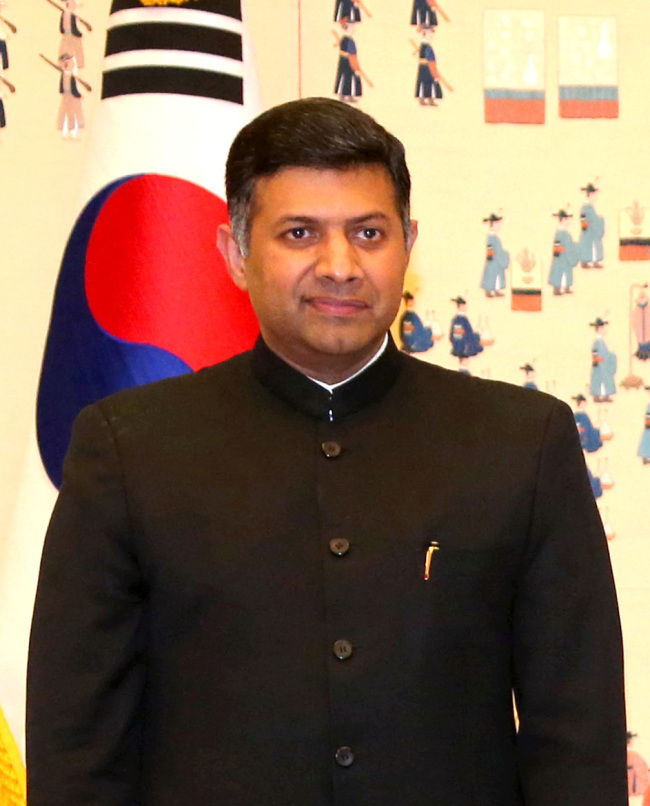 The following is the full text of the interview with Ambassador Doraiswami. ― Ed.

The Korea Herald: Can you explain the main focus of Prime Minister Narendra Modi’s visit to South Korea?

Doraiswami: The prime minister’s visit is aimed at deepening relations with a nation that he has himself described as one of the most important countries in Asia. Having visited Korea twice in the past, before being elected to his current post, our prime minister has publicly said that he had taken inspiration from the success achieved by the hardworking and talented Korean people in creating a prosperous modern economy and a progressive and vibrant democracy after the tragedy of the Korean War.

KH: It has been widely expected that Prime Minister Modi would promote his “Act East” policy initiative during his stay here. How important is Korea in terms of implementing the policy aimed at strengthening ties with neighboring countries?

Doraiswami: Our prime minister has been on record to underline the priority he attaches to our strategic partnership with the Republic of Korea, which is one of the most important partners in India’s effort to transform its partnership with the nations of the Asia-Pacific in a proactive and dynamic way. Taking our bilateral relationship to the next level is therefore an important prerequisite for the success of India’s “Act East” policy.

KH: The prime minister is to meet top South Korean entrepreneurs including the head of Hyundai Motors, to support business cooperation. Are there any prospects of new business deals during Modi’s visit to Korea?

Doraiswami: Apart from addressing a joint meeting of our CEOs Forum, the prime minister will meet a number of senior Korean business leaders, whose vision has been instrumental in powering the Republic of Korea’s phenomenal development story. These conversations will be aimed at facilitating more mutually-beneficial business opportunities for businesses in our two countries. For obvious reasons, we do not intend to list or speculate about possible outcomes.

KH: The Modi government is pushing to grow the country’s defense industry under its “Make in India” policy drive. Will there be any progress during Modi’s visit on the efforts to strengthen defense industry cooperation between India and South Korea?

Doraiswami: India is also paying close attention to the Republic of Korea as a partner of potentially great significance in building our indigenous defense industry. We see several areas of mutual strength, which can enable us to create value and benefit for both sides.

Doraiswami: Apart from trade and economic cooperation, our prime minister would possibly also seek to find convergence with the Korean leadership on ways to deepen our broad-based strategic partnership in pursuit of our shared goals of advancing peace, stability and security in Asia. We also want to increase our ties with Korea in every sphere of government activity ― including defense, science and technology, and culture ― and also through a sustained effort to build people-to-people ties.

KH: India is regarded as an influential regional power. What kind of role does the Modi government think it can play to promote regional peace and stability?

Doraiswami: India is fortunate enough to have close cooperative ties not only with the Republic of Korea, but also with the United States, Japan and the People’s Republic of China. We believe that intensification of our important partnerships with each of these countries is not a zero-sum game, and that the success of our Act East policy will enable us to ensure greater cooperation with the major nations of the Asia-Pacific.

KH: North Korea’s nuclear threat is a persistent security concern here in South Korea. Is there any way for India and South Korea to work together to help address this issue involving the communist regime in Pyongyang?

Doraiswami: India has always supported the desire of all Korean people for reconciliation and cooperation, and their goal of a reunified Korean peninsula. We also support the effort to stop development and deployment of nuclear weapons and their delivery systems on the Korean Peninsula as well as associated proliferation of such technologies into and out of the peninsula.

KH: Cultural and people-to-people exchanges are crucial in strengthening the foundation for bilateral cooperation and mutual understanding. Is there anything the Modi government has in mind to bolster these exchanges between the two nations?

Doraiswami: India-Korea relations are rooted not only in our common values and the congruence of our strategic perspective, but also in the ancient cultural bonds that bind our people together. Korean historical traditions trace the link between our people to A.D. 48, in the celebrated marriage of Queen Suriratna, an Indian princess, with King Kim Suro, of Gimhae. With this background and ancient commonality between us, we believe that we have only begun to explore the surface of what is possible between our people. Because this wonderful tradition is not well known enough in India and the world, we intend to work with our Korean partners to celebrate this wonderful legend by preparing a joint musical production. Apart from this, we have on our calendar a series of productions through autumn, as part of a Festival of India in Korea. We also welcome more cultural exchanges from Korea, to introduce Indian people to the sights, sounds, colors and flavors of Korea’s ancient culture.

KH: Lastly, each country has its own strategic value, which is the reason why one country wants to keep close relations with the other. What is the strategic value of South Korea from India’s perspective?

Doraiswami: In recent years, Korea has become an important and valued partner of India. Korean companies have, in particular, built a strong presence in the Indian manufacturing sector. At the same time, Indian companies are increasingly looking at business opportunities in the Korean market, including through investment. We see Korea as a privileged partner in India’s quest for development, and as a trusted friend with whom we have increasingly similar strategic perspectives of the world. A joint partnership to secure a stable, prosperous and rule-based international order has great value for both of us, as we both seek a similar international system to enable us to continue to secure the best possible development frameworks for our people.