[ The Korea Herald – Send E-mail ]
[Herald Interview] Agency calls for health care support for North Korea
By Claire Lee
Published : May 14, 2015 - 19:09
Updated : May 18, 2015 - 10:12
When Lee Soo-ku, president of the Korea Foundation for International Healthcare, visited a dental facility in North Korea for the first time in the early 2000s, he was almost speechless.

“There was literally nothing except a few very basic instruments,” he said. “There was a mouth mirror and an extractor. That’s about it.”

Lee, who is also a practicing dentist, has been serving as the head of the KOFIH since 2012. His organization is the only South Korean public agency that provides health care support to North Korea. Some of its ongoing projects include establishing a health screening center in the Gaeseong Industrial Complex for North Korean workers, as well as supporting North Korean tuberculosis patients in its northern free-trade city of Rason. 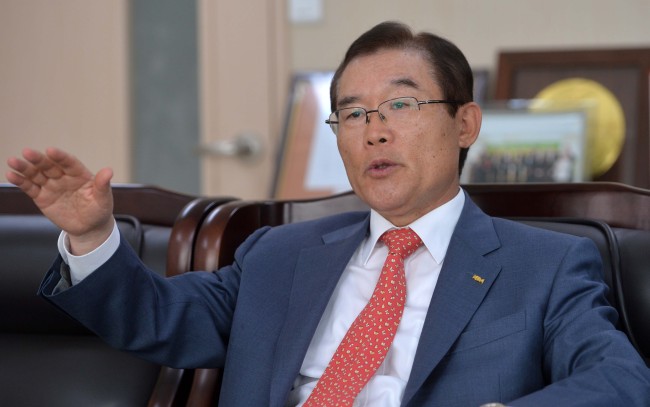 Lee Soo-ku, president of Korea Foundation for International Healthcare, speaks during an interview with The Korea Herald in Seoul on Wednesday. (Lee Sang-sub/The Korea Herald)
In 2008, the agency completed its renovation of the Onjeong Community Hospital in North Korea’s Goseong County. The hospital, which is responsible for about 5,000 people living in the county, now has fully-equipped facilities including a dental clinic. But Lee said South Korea was still not doing enough to support North Koreans who are in need of quality health care, especially pregnant women, tuberculosis patients, and children suffering from chronic malnutrition.

“Many experts estimate that about 8 percent of the entire North Korean population is suffering from tuberculosis,” he said.

“As many already know, a lot of North Koreans are malnourished. Those who suffer from malnutrition are especially vulnerable to TB. And because anti-TB drugs can cause a number of adverse effects, such as drug-induced hepatitis, taking the drug can be especially painful and difficult for malnourished patients.”

Lee said because of malnutrition and scarcity of medicines, the number of North Korean patients with multi-drug-resistant tuberculosis is rising. MDR-TB is a form of TB infection caused by bacteria that are resistant to at least two of the most powerful first-line treatment anti-TB drugs. The condition, which is much more dangerous and difficult to treat than TB, is often caused by the TB patient not taking the medication properly, or stopping his or her treatment due to expense or scarcity of medicines.

“This is why I suggested establishing a health screening center at the Gaeseong Industrial Complex. If 8 percent of the entire population is suffering from TB, I assumed there could also be patients among those who work at the complex,” he said.

“Supporting North Korean TB patients cannot be done by simply sending anti-TB drugs,” he added. “What is needed is a solid residential and medical facility that can quarantine MDR-TB patients, TB-screening equipment for prompt detection of infectious patients and stronger measures to combat malnutrition in the country.”

North Korea’s health care system, which emphasized free cost and preventive care, fell apart during the “Arduous March” ― a great famine that accompanied the country’s economic crisis from 1994 to 1998. According to a number of North Korean defectors interviewed by the KOFIH, a lot of doctors in the North aren’t paid enough or paid at all, and therefore aren’t motivated to do their jobs. Many of them are involved in illicit drug sales.

Because patients are assigned to a specific doctor in the region by the regime, they are not allowed to see other medical professionals even if they are not satisfied with the treatment they get from their designated doctor. As a result, those with money bribe the doctors that they would like to see, while the impoverished are often left with no health care options.

Some of the most vulnerable to the current system include pregnant women. As of 2010, North Korea’s maternal mortality ratio was 81 women per 100,000 live births. South Korea’s ratio was 16, while Japan and China’s ratios were 5 and 37, respectively.

Poor sterilization of medical equipment can lead to infection of patients in the facility. In North Korea, 15 percent of women who die due to complications from pregnancy or childbirth die from sepsis, a whole-body inflammation caused by an infection.

To foster experts on North Korean health care, the KOFIH has been running a special educational program for activists and health care professionals since 2013. Lee stressed that humanitarian support for North Koreans should not be affected by inter-Korean relations. Some of the KOFIH’s projects were suspended after the North’s 2010 sinking of the South Korean warship Cheonan.

“President Park Geun-hye said she’d expand humanitarian support for North Korea during her recent Dresden speech and I thought she was taking the right approach,” he said. “We should think of giving health care support to North Korea as preparation for the two Koreas’ unification.”

“Lack of iodine can severely affect a child’s brain and intellectual prowess, which can lead to developmental disabilities. If we don’t do anything about this, there will be more social costs to tackle this issue in the future, especially after reunification.”