[ The Korea Herald – Send E-mail ]
[Herald Interview] Jang Hyun-seung hopes to show new side through solo debut
By Korea Herald
Published : May 12, 2015 - 19:06
Updated : May 12, 2015 - 19:09
When onstage as a member of Beast or half of the duo Trouble Maker, Jang Hyun-seung exudes charisma and sex appeal. But offstage, at a group interview on Monday at a cafe in Cheongdam-dong, Seoul, Jang was soft-spoken and shy as he talked about his first solo EP, “MY.”

“I wanted to come without any makeup, but I was afraid you’d think I didn’t really care about the interview,” he said as he sat down in a red flannel shirt and torn jeans, running a hand through his hair.

According to Jang, he wanted his solo EP to establish a more unique, individual image with his fans.

“I wanted to show my more relaxed side,” he said, explaining the core concept of his EP. “I felt like my image was too strong with Trouble Maker and Beast. That’s why I dressed casually in a lot of my jacket photos. The music video’s pretty laid-back as well.” 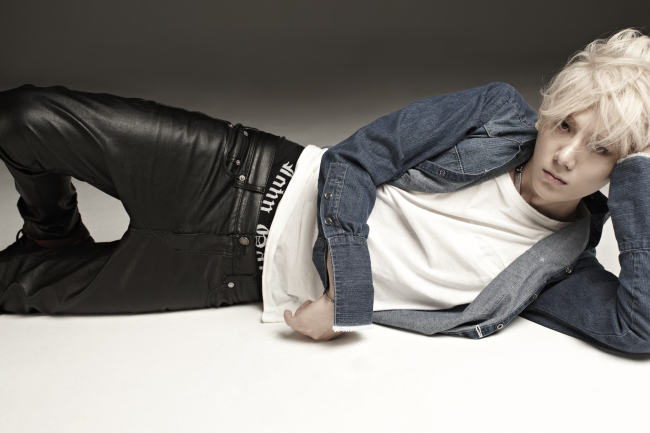 Jang Hyun-seung. (Cube Entertainment)
He said that he hoped the EP would leave a strong impression, making people see him in a new light even if he goes back to his previous Trouble Maker style.

The album opens with the aptly named, thumping hip-hop track “It’s Me,” and moves through various hip-hop and R&B-infused songs with unapologetic titles like “Dirty Joke” and “Break Up With Him.” The title track “Ma First” featuring rapper Giriboy is a hip-hop dance song written by the producer group Black Eyed V, complete with groovy verses and an addictive, hard-hitting chorus.

“I wanted to move away from the ‘Cube’ style,” he said, referring to his label. “I wanted the EP to have a hip-hop base, which is hard to find in Cube’s songs. If you listen to the music and look at the credits, it doesn’t feel like a Beast album. I’m very satisfied with it.”

Still, he said, he felt the pressure of having to do well with his first solo album.

“It’s much harder than being with a team, because I’m in every shot,” he said.

“I was really nervous before my first broadcast performance, and I ended up not doing very well,” he said. “I didn’t like it. Luckily, from the second day I was much more relaxed and had a ton of fun.”

Jang said that since the album was put together relatively quickly, he was a bit worried. He took special care to make sure the album was the best it could be.

“I was a bit of a perfectionist. I think I annoyed the staff a bit,” he admitted. “I checked the fonts that were used in the album, and spoke up about how I wanted to do the audio teaser, the jacket photo shoot, the music video and the choreography.”

“Of course, I don’t do that when I’m working with Beast, because I need to compromise,” he said. “But with my solo album, I wanted everything to be just how I wanted.”

After all that work, he was determined to bring all he had to the stage. “Before I go on stage, I tell myself that either I’ll break the stage dancing, or break my legs trying,” he said. “Luckily, I have a surge of energy when I go onstage. It just comes naturally. I completely change, because I’m usually very quiet, especially with people I’m not very close to.”

When asked about his plans to move into acting or other gigs, Jang said that he was dedicated to music, for now.

“I do want to try acting someday,” Jang said. “But it’s just not the right time yet. I feel like I don’t have a concrete identity yet as a singer. When the timing’s right, I’ll try more talk shows and acting.”

He also said that he was trying his hand at writing songs, but that he felt he wasn’t ready to perform his own work yet. “I don’t think that it’s necessary to put my own lyrics or music in my album, if it won’t make it better,” he said.

For now, he said he hoped his album would convince fans that the Beast members could each stand on their own. “That way, when we come out with a group album, it’ll have a stronger synergy,” he said.

Beast’s Jang Hyun-seung dropped his first solo EP “MY” at midnight on May 8. He will be wrapping up his promotions with “Ma First” this week.