The company recently launched Candy Crush Soda, the sequel to Candy Crush Saga, one of the most successful digital games in the world, to lure Korean gamers.

Its star-studded TV commercials in particular are garnering attention as they feature a slew of Korean celebrities, including ballerina Kang Soo-jin and baduk master Cho Hun-hyun.

“The head office is well aware of the importance of the Korean market for its Asian success,” said Brian Oh, managing director of King Korea, in a recent interview with The Korea Herald. Prior to joining King Korea in 2013, Oh worked at Korean game companies such as Game Ville and promoted the games in overseas markets. 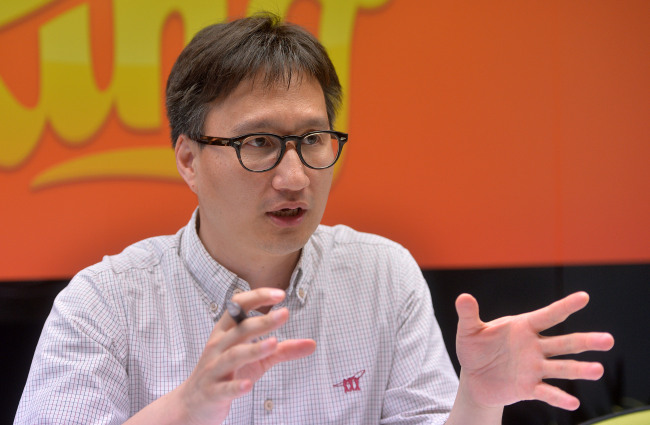 King Korea managing director Brian Oh speaks during an interview with The Korea Herald at his office in Seoul last week. (Lee Sang-sub/The Korea Herald)
“They are willing to learn from the market and gamers and adopt new ideas.”

Every month, 356 million users in more than 200 countries distract themselves playing King’s games, most famously the “crack app” Candy Crush, where users match rows of identical candies to “crush” them and progress to the next level.

In Korea, where more hardcore shooting or role-playing games are favored, the trivial but addictive Candy Crush Soda has remained in the top 10 charts at Apple and Android app stores since its March debut.

King previously teamed up with KakaoTalk, the nation’s most popular mobile messenger app, to launch its new games. But this time it decided to go alone, pouring more resources into branding and marketing activities.

King operates five branches in Seoul, Tokyo, Shanghai, San Francisco and Malta. With three branches in Asia, the company is seeking to expand its presence for growth.

“I wouldn’t say our games would be more localized for different markets, especially for Asia. We are still a global game-maker that offers standardized games around the world,” Oh said.

“But we are ramping up efforts to respond to local demands more promptly and help the head office better understand different needs.”

With the King game gaining popularity, tips are widely shared online to trick the game into limitless “lives.” (It usually takes 30 minutes to receive a life.) This must have posed problems for the developer, whose key revenue source is item sales within the game?

“We think differently,” Oh said, adding the company has no immediate plan to respond to the trick. “That reflects enthusiasm about the game, which is good for us. Our ultimate goal is to make more people play our games.”