Whether riding his skateboard during lunch hour or sitting at his office desk surrounded by animated figurines, all Koo thinks about is how to make “MapleStory” more visually engaging and entertaining.

As the chief concept artist for MapleStory, Nexon Korea’s fantasy adventure multiplayer online role-playing game, he is faced with the heavy burden of making the company’s all-time favorite PC game sustainable in this rapidly-changing mobile environment.

The pressure has increased as MapleStory marks its 12th anniversary this year and joins a very small league of Korean games, including NCsoft’s “Lineage” that has kept going for more than a decade.

But Koo likes to think of it as a challenge and opportunity to reboot MapleStory and its pixel-art characters. 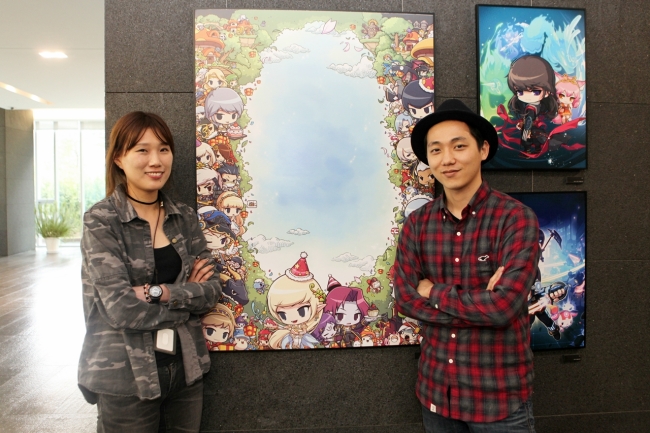 “MapleStory” chief concept artist Koo Kyo-seong (right) and business strategist Shim Gyu-yeon. (Nexon)
“We want to do what’s never been done or seen before, like make the Maple World and its characters cooler, classier and fancier, rather than just being cute and little,” Koo, 36, said in an interview at Nexon’s headquarters in Pangyo, Gyeonggi Province.

This doesn’t mean that his team will completely makeover the looks and stories of the characters, whose roles range from warriors and magicians to pirates.

It will still have that “retro game look” that people in the 80s enjoyed while playing console games such as “The Legend of Zelda,” Koo said.

The concept will remain the same ― small-size characters with bright and light colors in a battle between good versus evil, he noted.

“That is the MapleStory identity. We will keep that,” Koo said. 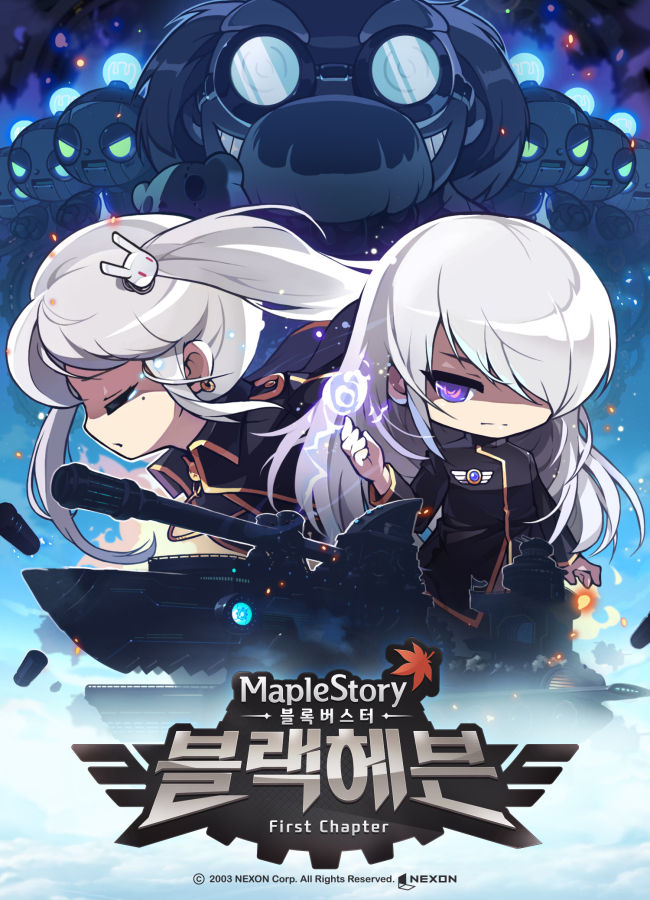 The chief concept artist said he tries to reminisce the old days when he used to love playing with toys and watching Japanese animations.

“MapleStory characters, as you can see, have drawn inspiration from Japanese animation,” he said.

As an artist, Koo also has to keep up-to-date with cultural trends by researching what MapleStory’s players ― mostly male teenagers and early 20-something adults ― love to do, where they like to hang out, what TV shows or movies they like to watch.

Contemplating ways to enhance and simplify the game’s user-experience is also part of Koo’s job, which only used to be just creating concept arts and illustrations.

It’s all part of making the art of MapleStory into a business.

He said this was where his close partner Shim Gyu-yeon, the game’s business strategist, comes in.

MapleStory’s freemium model, which allows players to play the game for free but have to pay for online accessories, has been recognized worldwide. Its freemium model has also been mentioned in books such as Chris Anderson’s “Free: The Future of a Radical Price.”

Shim said in the beginning, people inside the company used to joke that MapleStory was a game without a story.

“The creation of the Cygnus Knights story in the game in 2008 ultimately gave it a second life both in terms of content and business,” she said. “We seek to expand the MapleStory universe by boosting its licensing business.”

Shim and Koo said their long-term goal was to make its characters into renowned icons like Mario Brothers, Sonic the Hedgehog and Disney’s characters.

“That’s what the 12th anniversary (of the game) means to us ― going back to basics, starting afresh and making the characters iconic,” Koo said.