[ The Korea Herald – Send E-mail ]
[Herald Interview] ‘Korea is ready for McLarens’
By Suk Gee-hyun
Published : May 3, 2015 - 19:47
Updated : May 3, 2015 - 19:47
Buying a McLaren vehicle is buying “technology and craftsmanship,” according to David Mclntyre, the newly appointed Asia-Pacific director of the British supercar maker.

The “small” U.K.-based supercar maker is finally making inroads in the Korean market, having launched its first showroom in southern Seoul on Wednesday.

McIntyre has long experience in Korea’s high-end auto import market. Until recently he headed the local branch of Jaguar Land Rover, and the brands saw massive sales rises under his watch.

Although McLaren lacks the volume of his previous brands ― the six-figure carmaker expects to sell less than 5,000 units around the world this year even with the addition of the “cheaper” new sports range ― McIntyre sees good prospects for McLaren in Korea.

Noting that Korea is a very important market that “can surprise people,” he said that the country’s automotive culture has matured enough for the comparatively lesser known supercar brand.

“The market has developed from a showoff market. They are buying things because they know and read about them. What they are buying is technology and craftsmanship.” 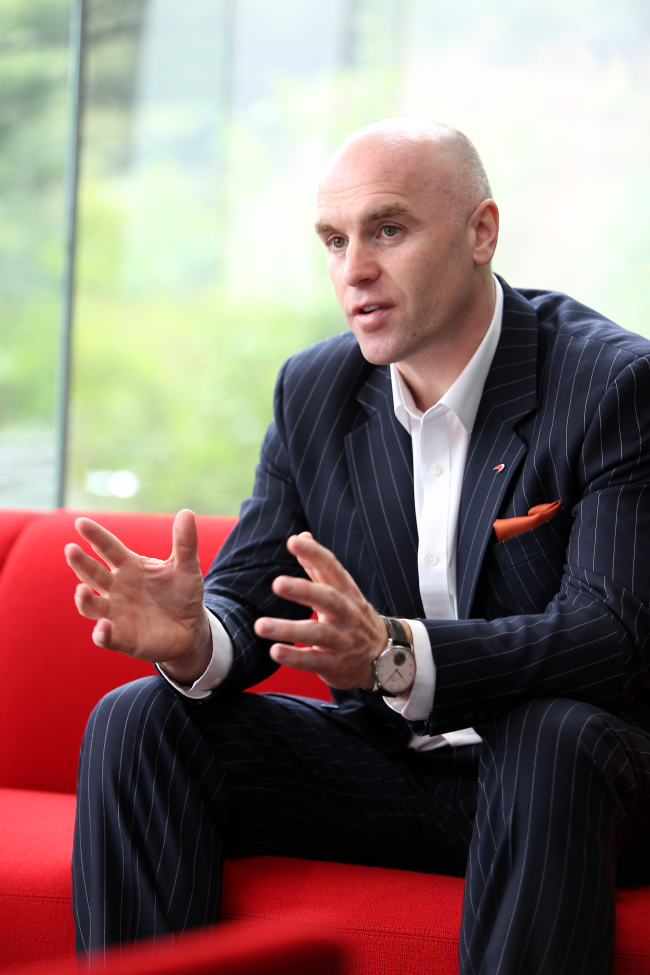 McLaren’s Asia-Pacific director David McIntyre (McLaren)
Citing the success other British marques such as Bentley and Jaguar have had in Korea, McIntyre said that Korea’s early adopting automobile enthusiasts are ready for McLarens.

“The market is ripe for something different, and we offer that. The market is really maturing in Korea. When someone buys a McLaren, they buy it because they know what they are buying.”

Perhaps proving his words, the company has sold five vehicles even before its official launch in Korea, and McIntyre hopes to attract more early adopters to the brand as part of a three-phase strategy for establishing the company here.

In phase one, the company hopes to attract early adopters and enthusiasts. In the second phase, the company will target “those who are curious” by attending track-days ― events where nonprofessionals are able to drive on racing tracks ― and through test-driving events.

Another key part of the company’s strategy is customer service, he said.

“Service is really important in Korea in particular. Koreans have expectations of immediate service. If your refrigerator breaks down, somebody is there in an hour. People are used to immediate gratification in Korea and we need to be ready for that.”

According to McIntyre, the McLaren showroom in Seoul has three technicians trained in the U.K., and the company is ready to bring in more.

While the free trade agreement with the European Union and the won’s gaining strength have allowed McLaren vehicles to be marked at “competitive prices,” a McLaren is a dream for most.

It will, however, bring in the less costly sports series later in the year, which according to McIntyre, offers “the supercar experience in the sports car segment.”

However, as with all supercar brands, McLaren’s high price tags are unlikely to hamper the British carmaker’s sales.

“(McLaren buyers are) people who are rewarding themselves, people who have busy lives, but want to have some fun on the weekends,” he said, adding that most of McLaren customers are those who have achieved success in “mundane businesses.”

“I think Korea can be a bigger market that Japan. Because my experience in Korea is that if you get things right, if you give people good service and you create good experience for people to enjoy you can outgrow other markets.”