After debuting in France in 2012, the show has now been performed more than 80 times worldwide. The 19-and-older, nonverbal show ― minus the occasional screams and grunts ― held two shows at the Seongnam Arts Center on Friday and Saturday, marking one of the rare occasions for local audiences to view a live, nude art production on stage.

With nine men and nine women of all shapes, sizes and races stripped to their bare essentials ― nothing ― the production, despite initial popular belief, is not at all sexual in nature. Rather, the performance is Dubois’ interpretation of a Greek tragedy based on the philosophies of Nietzsche, cutting to the heart of how we define our humanity ― which, according to the director, demands effort, consciousness, curiosity and intelligence.

“My concept behind ‘Tragedie’ is simple: Being human does not make humanity. This is our tragedy,” said Dubois, during a round-table interview at the Residence of France in Seodaemun-gu, Seoul, on Thursday. 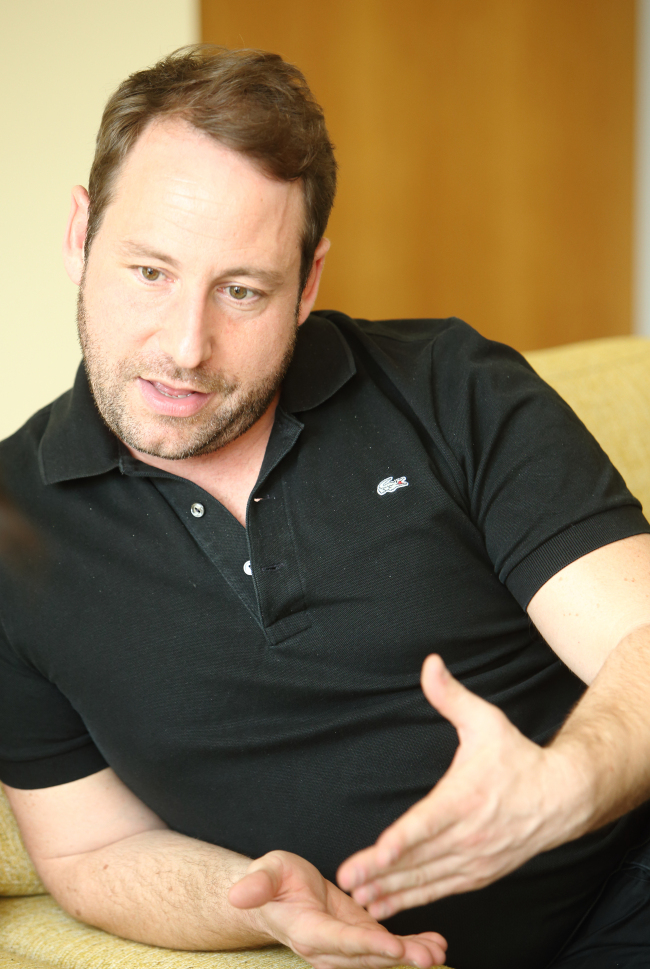 French director and choreography Olivier Dubois discusses his latest contemporary dance production, “Tragedie,” during a round-table interview held at the Residence of France in Seodaemun-gu, Seoul. (Seongnam Arts Center)
“After the first five to 10 minutes, once you get rid of the initial mental adjustment of the full nudity, you will be totally unfazed by it,” he said.

Regardless of the glaringly obvious nudity that sets the production apart from your typical contemporary stage performance, Dubois says his repertoire is not meant in any way to emphasize nudity.

“Obviously, a lot of the focus on this dance piece emphasizes the fact that all the dancers are nude, but I am not trying to direct people’s attention to the dancers’ nakedness,” said Dubois. “What makes this production different from most other performances that feature nudity is that in this show, there is no stripping of clothes. It is not about sex or anything pornographic, which is obviously intended to excite one’s attention. In ‘Tragedie,’ it starts nude and it ends nude.”

“Also, one of the great aspects of the performance being nude is that we save a lot of money because there are no costume costs,” the director quipped.

The sheer intrigue of the nude aspect of the performance, along with being its first showing in Asia, peaked locals’ out-of-bounds curiosities as the 1,800-seat opera house nearly sold out both days ― a rare feat for any modern dance production nowadays.

However, although it would be safe to assume that the nude reality of the show was one of the highlight features that pulled in a lot of the local audiences’ visual taste buds, the show was not without its gnawingly repetitive scenes.

For the entire half hour, the completely expressionless dancers merely walked methodically to, from and across the stage, as if it were a naked runway fashion show with the same single drum beat background music on repeat. It was enough to make one think, “Who knew naked could be so boring?”

Hence, the very essence of “Tragedie” ― the nudity ― is irrelevant.

During the first few minutes of the show, human nature simply takes its course, and it’s needless to say that most likely everyone in the audience was scanning every dancer that marched in strategic fashion onto the stage from head to toe, noticing every minute detail of the exposed bodies.

To say the first half of “Tragedie” was tediously slow, and at times painstakingly repetitive, would be an incredible understatement. However, Dubois’ intent to display the human body at its purest form, in the state of walking, did indeed make me lose all awareness and even care that the cast was void of clothing.

Thankfully, the second half of the show picked up and went beyond marching on stage; but what replaced the tedious walking was a sudden manic state of the dancers gyrating and haphazardly frolicking about on stage in almost a mentally possessed state of mind.

“Tragedie,” despite its admirable merits in pushing the boundaries on how we view the human form, is an acquired taste, to say the least, and would not be ideal for those with a fleeting attention span.