[ The Korea Herald – Send E-mail ]
[Herald Interview] Managing director of COS stresses timeless design, functionality
By Korea Herald
Published : Mar 29, 2015 - 18:09
Updated : Mar 29, 2015 - 18:09
In the era of fast fashion, the life cycle of clothing is becoming shorter. People consume clothes as if they are disposable goods, driven by the supply of low-cost, trendy clothes offered by fashion giants such as Zara and H&M.

However, the philosophy of COS goes against this fashion trend ― it believes fashion and longevity should go hand-in-hand, said Marie Honda, managing director of the company, a sister brand of H&M. 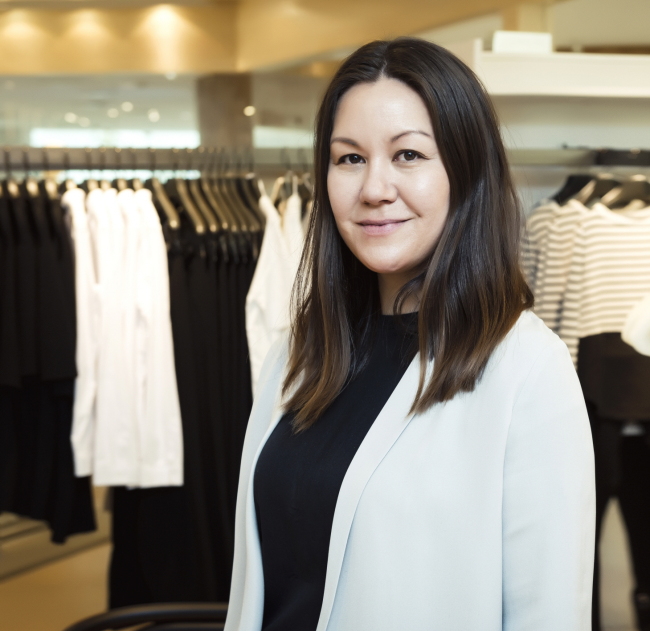 Marie Honda, managing director of COS, poses at the brand’s Yeongdeungpo Times Square store in Seoul. (COS)
“We have an approach to design that is timeless and permanent. Garments should last longer, and be functional,” said Honda in an interview in Seoul.

COS, shorthand for Collection of Style, has just opened its second store at Yeongdeungpo Times Square, Seoul, less than six months after the launch of its first store at Lotte World Mall in eastern Seoul.

Timelessness and functionality are some of the key factors that make COS appeal to diverse nationalities, Honda said. It is particularly loved by fans of minimal designer brands such as Jil Sander and Marni, but comes at much lower prices.

“We are the missing link between high-street and high-end,” said Honda.

The COS collection comprises mostly neutral colors and austere design. A large part of its collection consists of basic items found in everyone’s wardrobe, such as white shirts and little black dresses. But it also offers trendy seasonal items with new concepts.

“We have core essentials within COS’ womenswear, menswear and children’s wear that can be worn throughout the whole year. Designers look for new inspiration to come up with new concepts. There’s a lot of sportiness in this spring and summer season,” said Honda.

Last week in Hong Kong, COS introduced the 2015 fall-winter collection featuring voluminous cocoon-like silhouettes inspired by Japanese Mono-ha art. It has also released a line of limited edition unisex shirts ― a reinvention of the white shirt that will be sold in selected stores in Asia.

“COS appeals to anyone who is very much into design and quality and knows how you want to spend your money on clothes,” said Honda.