[ The Korea Herald – Send E-mail ]
[Herald Interview] Vulnerability of planet seen at the world’s ends
Sebastian Copeland talks about his journeys to the Arctic and the Antarctic and his photography for eco-activism
By Lee Woo-young
Published : Mar 26, 2015 - 20:12
Updated : Mar 26, 2015 - 20:12
The full moon is the ruler of the night at the North Pole, casting a yellow glow on the snow-covered surface. What seems like the only moving object is a man kite-skiing through serenity.

“The full moon at the North Pole means the sun is aligned on the opposite end. You could see the reflection of the sun coming down on the other end. This is one of the greatest and most peaceful moments (in the North Pole),” said Copeland, in the interview on March 21, in Seoul. He was in town for the launch of Napapijri, an Italian casual outdoor brand which has been sponsoring his polar expeditions for a decade. 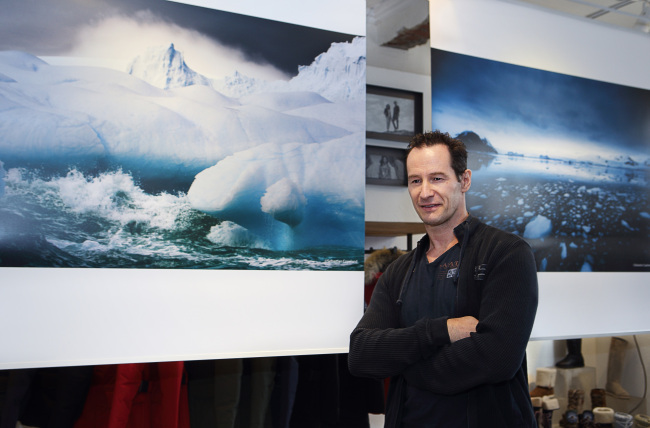 Photographer Sebastian Copeland speaks during an interview with The Korea Herald at the launch of outdoor casual brand Napapijri in Seoul on Saturday . (Napapijri)
The Los Angeles-based photographer has taken more than 12 polar expeditions, including some lasting as long as a year. In a 2009 journey, he covered more than 643 kilometers on foot. The following year, he traveled 2,300 kilometers of Greenland from south to north. He and partner Eric McNair-Landry became the first to cross the Antarctic from east to west from 2011-2012. They hold the world record of the longest distance traveled on ski kites in a 24-hour period ― 595 kilometers.

During his challenging voyages, Copeland has witnessed environmental emergencies closer than anyone in the polar regions.

“Because I am an advocate, I have a unique privilege of witnessing these environments and absorbing their impact on me. What I do is to communicate that feeling and bring that back to people (through my photographs) in order for them to experience what I’ve experienced,” said Copeland.

The 51-year-old has captured the alarming state of the melting glaciers, the sublime beauty of the world’s ends, and dangerous moments in the fight against the forces of nature. His awe-inspiring photographs raised awareness of the fragile state of the Arctic and the Antarctic, its effects on the rest of the planet through award-winning photo books and a documentary.

Copeland started his photography career shooting commercial photos for advertisements and fashion covers, but in the mid-30s, he decided to change the course of his career in search of photos that last longer and carry messages.

“As an artist, I was frustrated by the short life span of (commercial) photographs. Photography is by definition timeless, but commercial photographs are not,” he explained.

“I was getting more committed to using photography as a tool for a universal language to help communicate ideas. By my mid-30s, I looked at my photography as a mode of expression, advocacy and eventually the polar region was a way to combine my professional identity.”

Being athletic entire life, Copeland said it took him about a year or more to prepare for challenging journeys to the Arctic and the Antarctic regions.

But what keeps him motivated is the sense of solitude and serenity these harsh environments provide.

“They are (the polar regions) a real place for meditation. Getting a place of emptiness is basically what it is. You end up being in a place where you have a good opportunity to contemplate and the communion with nature is very much part of it,” said Copeland, who practices Buddhism.

Deep in the world’s ends, he presses the shutter in front of the landscapes and moments never revealed to anyone before.

“There are all kinds of subtleties and details that take investment of your time, physical investment and a very specific type of focus to extract certain features. The longer you stay, the more you will see. Then, you will get better photographs,” he said.