But what is the most important in a good piece of steak is the ingredient itself rather than having a star-chef, said Peter Zwiener, managing partner of the restaurant, showing his disdain for the current restaurant craze of showcasing renowned chefs. 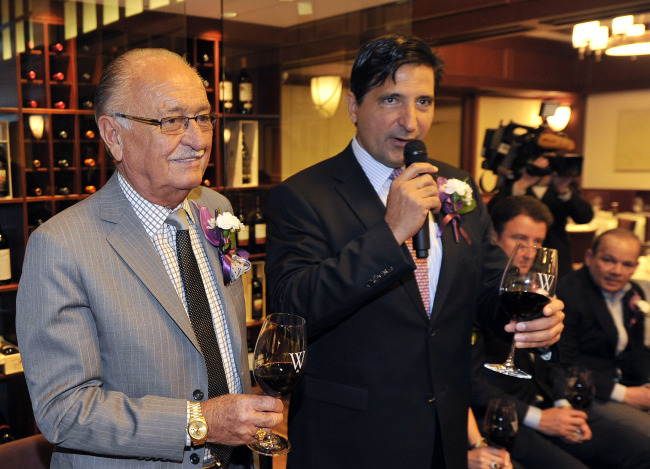 Peter Zwiener (right) and his father Wolfgang Zwiener make a toast in southern Seoul on Thursday. (Wolfgang’s Steakhouse)
The steakhouse is named after his father Wolfgang Zwiener. After having worked as the service staff at the legendary steakhouse Peter Luger’s in New York for more than 40 years, Wolfgang opened a restaurant to share his own standard of steak. The Seoul outlet is situated in the heart of affluent Cheongdam-dong in southern Seoul.

“It is all about the beef. If the beef is right, other things do not matter. We only use USDA Prime Grade Black Angus, carefully dry-aged for 28 days, roasted in the 1,600 degree-broiler and served by the best staff. This was how we have rapidly become one of the best steakhouses in New York,” junior Zwiener told The Korea Herald ahead of the opening.

“We even recommend our customers not to use too much sauce to enjoy the real and intensive flavor of the meat. I believe this is our strength,” he said.

Though the Seoul outlet is the company’s second in Asia and 11th worldwide, the provision of the top-quality U.S. beef is made possible through a special partnership with wholesaler Master Purveyors. The USDA Prime Grade Black Angus accounts for less than 3 percent of the U.S. beef.

Asked about the jaw-dropping price ― the signature Porterhouse for Two is priced at 168,000 won ($155) ― Zwiener stressed that dry aging is a delicate process and the price at the end of the day is reasonable.

“The meat shrinks by 10-15 percent in size. And the portion for two comes in 1 kilogram meat, so judging by the 100 gram unit, we are cheaper than any others in the market,” he said.

Tera International, the Korean partner of the company, said people who have already experienced the restaurant have made reservations and doing viral promotions about the diner’s signature Seafood platter, Porterhouse steak and Wolfgang Steakhouse.

“I was told that Koreans have started enjoying dry-aged steaks from barbecues. We will show the authentic dry-aged steak and lead the market here,” Zwiener said.