Rabbits are sensitive to a lack of oxygen and were often taken aboard submarines. If the boat’s rabbit had difficulty breathing, sailors sensed danger and rose to the surface.

Hong argues that artists should be no different from a rabbit in a submarine. They should perceive abnormalities in their surroundings, such as injustice and oppression, and alert the public to the dangers, the 60-year-old painter said in an interview with The Korea Herald.

“Sewol Owol” by Hong Sung-dam was pulled from the Gwangju Beinnale over its deptiction of President Park Geun-hye. (Hong Sung-dam)
The satirical artist was the center of attention last August when his painting “Sewol Owol” was turned down by the Gwangju Biennale, Asia’s first contemporary art biennale. He portrayed the incumbent president Park Geun-hye as a scarecrow facing off against parents of children who died in the April 16 Sewol ferry sinking. The biennale rejected the painting on the grounds that it lampooned the current president. Censorship of art became a burning issue in the nation as other angered artists pulled down their work from the exhibition. The head of the Gwangju Biennale Foundation eventually resigned to take the blame for the controversy.

Censorship of satirical paintings is nothing new for Hong. As early as the nation’s military regime in the ’70s, he started making drawings to lampoon authority and power, and has not stopped even now. In the ’80s, he was dragged twice to be brutally beaten by the police for satirizing the response to the Gwangju uprising ― a popular uprising in the city of Gwangju for democratization. The government troops’ brutal killing and beating of local Jeonnam University students who were peacefully demonstrating against the Chun Doo-hwan government sparked a storm of protest around the city.

Thirty-five years on from the democratization movement, Hong has not seen much progress in South Korea with regard to freedom of artistic expression. A series of rejections of his paintings under the current government makes him feel the nation’s freedom of expression is actually regressing. However, he still believes that serving as a watchdog of authority and power is an artists’ role to create a just and healthy society.

The following are excerpts of the interview with painter Hong.

KH: What motivated you to start making satirical paintings in the beginning?

Hong: When I was in college in the ’70s and South Korea was under a military regime, freedom of expression was extremely restricted. We were not able to express our opinions. Everything, from hair to ladies’ skirts, was controlled by the regime. I felt something was wrong, but there was not much I could do to stand up to the regime.

That was the first time I took an interest in satire ― an indirect tool to fight against the strong by the weak ― to resist the regime and its injustice. Since then, I have never stopped producing satirical paintings with every change of government ― whether it is right or left. 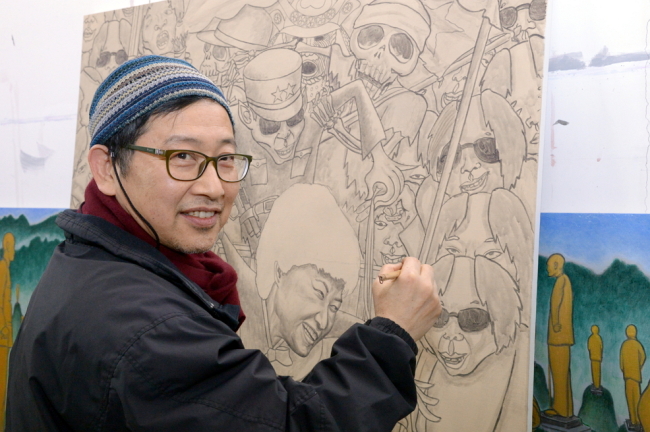 Hong Sung-dam (Chung Hee-cho/The Korea Herald)
KH: How do you define a relationship between arts and politics?

Hong: Arts and politics cannot be separated. Let’s say, one fine artist draws one beautiful rose. His surroundings such as society, culture and politics directly and indirectly affects his painting. If he feels oppressed in a society he belongs to, it will be placed in the drawing. Art is considered the recording and evidence of the time.

Freedom of artistic expression is a barometer of democracy, and it should have no limits. It serves as a watchdog of power and authority, and to monitor power, corruption and collusion between the authorities and conglomerates.

Also, artists should keep a certain distance from politics and have no political preference to unbiasedly criticize politicians. The role of artists is not to stir up people with a certain political ideology but to alert them to social irregularities and injustice.

KH: Do you see much progress in terms of freedom of artistic expression during the last few decades?

Hong: I saw some progress during the two nonconservative governments of Presidents Kim Dae-jung and Roh Moo-hyun. Under Kim’s regime, I portrayed him being hauled by the International Monetary Fund, with hooks in his nose. I wanted to say that South Korea gave in to unrealistic demands by the international institution during the 1997-98 Asian financial crisis. Surprisingly, I got a phone call from the presidential secretary’s office, who told me that Kim actually liked the painting and said “Allowing more freedom to criticize government leaders creates a healthier and advanced society.”

However, with power shifting to the right as Lee Myung-bak took office, political satire reverted back to the old days. The government began to demand pulling down of paintings and reject exhibits. Under Park Geun-hye’s administration, it is getting tougher. The Gwangju Biennale rejected the “Sewol Owol” simply because it is unfavorable to the ruling regime.

KH: Your work seems rather well received overseas. You were also selected as one of the leading global thinkers of 2014 by Foreign Policy. How do you view this?

Hong: It is a shame. The reason Foreign Policy selected me seems to be that it wanted to highlight the strict restriction of freedom of expression in South Korea, a nation known as one of the most democratic countries in Asia.

“Sewol Owol” is set to be on display in an art museum in Berlin in April. I was also invited to attend the exhibition. People in Germany already know about the censorship issue after Der Spiegel ― one of Europe’s largest publications of its kind ― covered the topic last October.

KH: What is your goal in life?

Hong: I am an aesthetic artist, not a satirical painter. I want to spend my life drawing beautiful women or flowers rather than political satire. However, if society continues to be unjust and oppressive, I should alert the public like a rabbit in a submarine with the weapon of satire.