[ The Korea Herald – Send E-mail ]
[Herald Interview] Big ideas in Steve Barakatt’s upcoming Seoul concert
Celebrated composer and pianist hopes to ‘wow’ fans with first-ever symphonic show in Korea
By Korea Herald
Published : Feb 26, 2015 - 20:26
Updated : Feb 27, 2015 - 18:18
Long loved in Korea for gentle tunes such as “Rainbow Bridge” and “Day by Day,” composer and pianist Steve Barakatt has returned this time with an epic symphony that he hopes will “wow” fans.

Barakatt will be showcasing, for the first time in Korea, his symphonic work “Ad Vitam Aeternam” ― “for eternity” in Latin ― alongside conductor Kim Bong-mee and Herald Philharmonic Orchestra.

Written in 16 short movements, the symphony travels through different stages in the human experience.

“We all have questions on who we are,” Barakatt said in an interview with The Korea Herald on Tuesday. “Why am I here? What is my mission?” 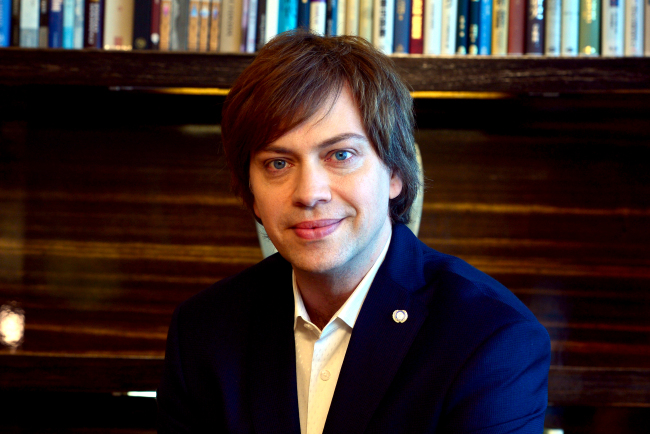 Steve Barakatt during an interview with The Korea Herald in Seoul. (Yoon Byung-chan/The Korea Herald)
Stemming from these curiosities, the classical piece explores personal and philosophical themes including the naivete of childhood, the maturity of aging, and the inevitability of death.

“The symphony doesn’t pretend to answer the questions,” the 41-year-old musician said. It does, however, express years of profound reflections.

“I think eternity is a concept where time doesn’t matter,” he said. “It means that the rest matters, meaning your emotions ... and the experiences you’ve had.”

While composing, Barakatt met with people of different nationalities, ages and beliefs to explore the diversity of the human condition.

“I think the secret is to listen to others,” he said on his creative process.

“Ad Vitam Aeternam” is a thoroughly classical piece in terms of sound, as opposed to some of Barakatt’s more experimental pieces where electronic instruments were incorporated into his mainly New Age piano music.

Regarding the format, however, it deviates from convention and consists of 16 movements, each lasting three to five minutes.

The brevity of each part, Barakatt says, makes the piece a “symphony for today” as it combines the “different pace” of modern music and centuries-old classical instruments.

The audience will also want to pay attention to the transitions in stage lighting, meant to accomplish a complete multisensory spectacle, he said.

Further, symphonic versions of the musician’s greatest hits including “Dreamers” and “The Whistler’s Song” will also be presented for the first time.

Barakatt viewed the concert as a celebration and expressed his enthusiasm at being able to put on stage his most comprehensive performance yet in Korea.

“What we wanted to celebrate was ... the great friendship we have (had) for the last 20 years,” he commented, referring to the many concerts and collaborations he has worked on in the country.

Barakatt plans to stay in Korea until the end of March. As a lover of cuisine and all different genres of music ― “Good music is good music,” he said on his eclectic taste ― he enjoys exploring Seoul’s restaurants and its modern music scene during visits. Regarding his next steps, the Lebanese-Canadian artist plans to revisit his roots and compose a symphony based on the book “The Prophet” by Lebanese philosopher Kahlil Gibran.

“Ad Vitam Aeternam” will be performed on March 8 at the Seoul Arts Center.