The 24-year-old musician, who went quintuple platinum in the U.K. with his 2011 debut album “+,” will be making his way to Korea to hold his first concert here.

“It was very special moment and something I did not expect at all,” Sheeran said in an email interview with The Korea Herald. “It is such an honor being nominated in the same categories as very talented musicians. 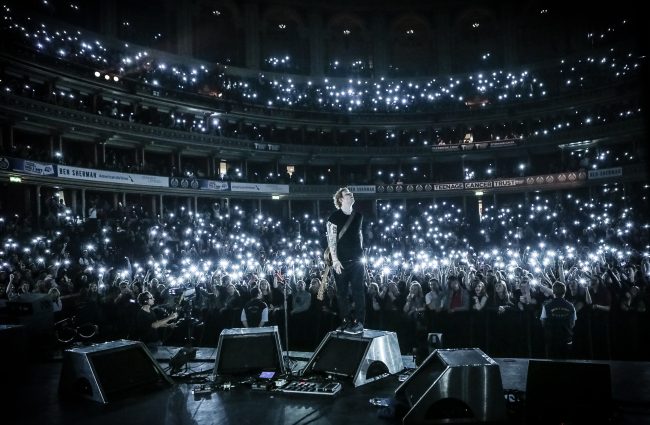 Ed Sheeran. (Private Curve)
“An award ceremony is a place that is always exciting, yet very nerve racking. I happened to perform with Herbie Hancock, John Mayer and Questlove on this year’s Grammys and that is something that I will never forget.”

The young artist hit his stride in the international music scene in 2012, after the release of his smash hit first album.

Global superstar Taylor Swift heard his music and asked him to sing on her record-breaking fourth studio album, “Red.” Sheeran was the opening act for the pop star’s concert tour. The gig launched his name across the U.S., where he eventually sold out the iconic Madison Square Garden arena for his own solo show.

“Taylor Swift is awesome. We have so much respect and love for each other’s music, and will always fully support it,” he said.

“As I toured with her, there are so many good memories and I met so many great people. It was funny because I had to impress so many people who did not know about me then. That was a big opportunity for me,” he added. “When I toured with her we performed at Madison Square Garden once, (where) I later performed for my own show a few years later. Still to this day, my greatest stage moment is performing at Madison Square Garden.”

Sheeran will be performing his first concert in Korea on March 8 at Seoul Olympic Park’s SK Olympic Handball Stadium with tickets priced at 121,000 won and 143,000 won.

“It’s a brilliant show by myself and there is great fun in it. Also there is going to be lots of audience participation in it, so the audience better be prepared. I am very excited to be coming and it is going to be good stuff.”

“Unfortunately I don’t know too much about Korea yet, so I am very excited to experience Korean culture,” he added.