She has done her best to meet the expectations, Lee said in an interview with The Korea Herald earlier this month, but the country has a long way to go. 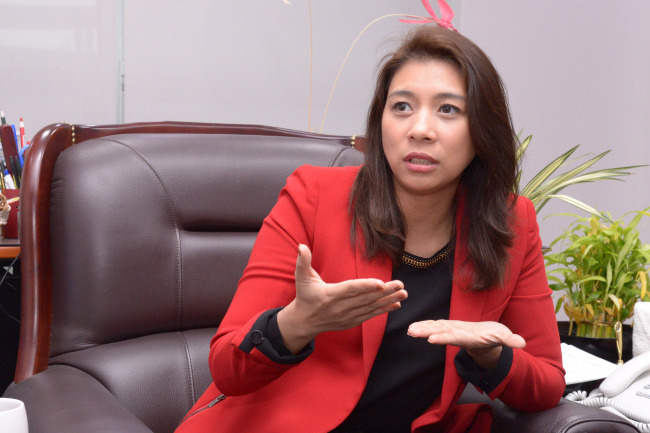 Jasmine Lee. (Chung Hee-cho/The Korea Herald)
“There has never been a multicultural society in South Korea,” she said. “So officials here don’t know exactly how to support such families here.”

Although international marriages involving South Koreans have decreased, more than 25,000 foreigners have wed South Korean husbands or wives each year from 2006 to 2013, according to Statistics Korea. Officials suspect thousands more are missed by government tallies.

The influx of both unskilled and skilled workers has also increased the need for a government policy that will assist foreign-born residents and their Korean-born children adjust to their lives in Korea. Often, the language is the highest barrier.

“Mothers who come from Southeast Asia, North America, or other places often don’t speak Korean,” she said. “Their children suffer the consequences, as their moms often lack the lingual requisites to coach and educate their children, who must learn Korean as they grow up.”

Incorporating males born in households with foreign fathers or mothers, into the military is another one of those needs.

South Korea’s Constitution obligates physically and psychologically fit men to serve 21 months in the armed forces. But the military did not accept “multicultural” men until 2011, as officials thought they would lack the social skills to mingle with others in their unit.

Lee has a son with her late Korean husband, who is likely to enter the military sometime next year. She said incorporating men from multicultural families was a step in the right direction.

“I asked the official if those multicultural men would fight separately from other units if a war broke out. He said no.”

“So I asked him, then why segregate them?”

But EPS laborers are subject to tough restrictions that only allow them to work here for three years. At best, they can work here for eight, but immigration regulations keep their families from entering Korea with them.

“I’ve seen employers who say they are reluctant to give up formerly nonskilled workers who have worked for them three, four years,” Lee said. “By then, employers say that the workers are now skilled, and are finally fluent in Korean. But the EPS forces them out.”

When asked if she’ll run again in the 2016 general election, Lee said she would if given the chance by her party. But she didn’t expect the Saenuri Party to relist her for a proportional representative position, or a run in a voting district somewhere in the country.

“That’s okay with me though. I’m sure I can continue my work elsewhere, without having people say bad things about me all the time,” she said laughing.