[ The Korea Herald – Send E-mail ]
[Newsmaker] Can Ssangyong Motor regain its past glory?
By Seo Jee-yeon
Published : Feb 11, 2015 - 19:20
Updated : Feb 11, 2015 - 19:56
For Ssangyong Motor, spring appears to have arrived earlier than expected. The labor strife-marred automaker is poised to celebrate the high unexpected sales of its new compact sport utility vehicle Tivoli and select its new leader in six years.

The automaker said on Wednesday it sold more than 8,000 Tivoli vehicles in the first month since its market debut on Jan. 13.

“The morale of employees is riding high due to the sales,’’ a company official said.

The Tivoli, rival to small SUVs like Renault Samsung’s QM3 and GM’s Chevrolet Trax in Korea, is the first new model developed since Mahindra & Mahindra, the auto-making arm of Mahindra Group, acquired Ssangyong in 2010. 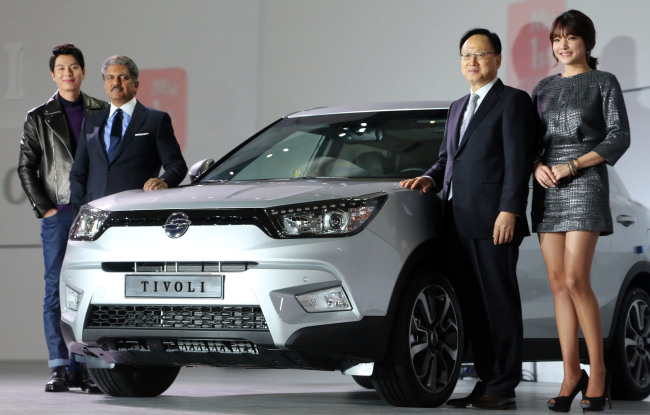 Mahindra Group chairman Anand Mahindra (second from left) poses next to the newly launched compact SUV, jointly developed by the group’s Korean arm Ssangyong Motor, with other company officials at a launch in Seoul on Jan. 13. (Yonhap)
Industry watchers said if the demand continues at this pace, Tivoli could become the best-performing model of the year. The automaker has set a sales target of 38,500 units this year.

They said the cheaper price tag ― compared to rivals ― is one of reasons why Tivoli has performed better than expected in the first month.

Another factor that drove sales of Tivoli cars is the public sympathy for former Ssangyong Motor workers, who are protesting to seek reinstatement, since being sacked in 2009.

During the launch event, Mahindra Group chairman Anand Mahindra vowed to rehire the workers when the company makes a turnaround.

The chairman pointed out that the success of Tivoli could solidify the firm’s turnaround.

Many Korean citizens were moved by his openness and sincerity to the workers when he met Kim Deuk-joong, who leads the Ssangyong Motor branch under the Metal Workers' Union,  at the company’s plant in Pyeongtaek on Jan. 14.

The chairman also talked to the two union members, who have been staging a protest atop a 70-meter chimney at the plant.

After the chairman’s visit, many Koreans from diverse sectors, including female singer Lee Hyo-ri and Pyeongtaek mayor Kong Jae-kwang launched an online and offline campaign urging people to purchase the Tivoli cars in order to help the laid-off workers get reinstated.

Coupled with the short-term success of Tivoli, the automaker has also started the selection process for a new CEO, to be discussed at its board meeting called to analyze the 2014 performance on Wednesday.

The company board recommended Choi Jong-shik, vice president in charge of Ssangyong’s sales division, as the sole CEO candidate on Wednesday. It also offered Lee the post of vice chairman.

The board will finalize the CEO selection process next month after getting an approval at the shareholders meeting on March 24.

“The new leadership will play a crucial role to restart the engine of Ssangyong Motor by making a turnaround and recover its reputation as a global SUV maker,” an industry source said.