Luscious, fragrant and delicate, macarons like his orange blossom-rose-ginger morsel serve as sufficient proof as to why he has been touted “the Picasso of Pastry” by French Vogue.

Now, with two boutiques in Seoul, the master himself is here in South Korea for a four-day trip that includes, of course, meeting with his fans and visiting his shops.

When he sat down for his interview with The Korea Herald on Tuesday at The Shilla Seoul, he was every bit cherubic and sweet-faced as the press had so often described him. 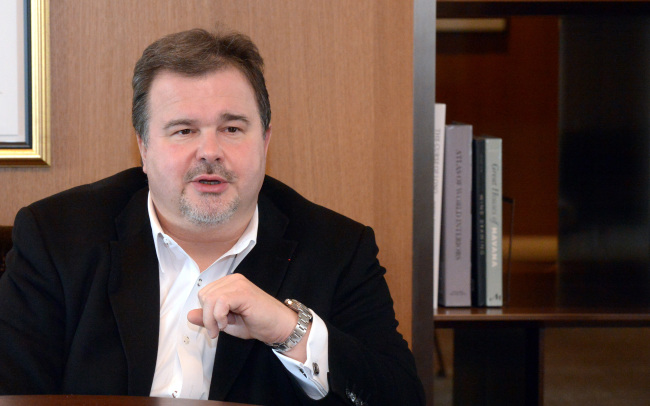 Pierre Herme. (Chung Hee-cho/The Korea Herald)
Yet underneath all that sweetness is a very keen, steady veteran, someone who is nearly three decades deep in his career as a pastry chef and has helmed the pastry kitchens of Fauchon and Laduree before launching his own namesake brand.

Through all the years, from when he first started at the age of 14 till now, he has grown increasingly devoted to the macaron ― that French cookie that in his formative years he admits he initially found to be too sweet for his discerning palate.

“When I started out as a pastry chef, the macaron was different from how it is now,” Herme, 53, explained. “There was not a lot of filling inside.”

Back in the day, according to Herme, the macaron was really about the meringue shells sandwiching what he found to be a relatively diminutive filling in a set of flavors like raspberry, chocolate and coffee.

His macaron, conversely, seems to be very much about the filling, which fairly oozes out when bitten into. In fact, the ganache center is where he and his team seem to focus on giving a free rein to their culinary creativity, marrying flavors like orange blossom with coffee and orange compote or chocolate with bits of blackcurrant for flavor and texture.

“I combine two to three flavors in one macaron,” Herme said, elaborating on how he works to achieve a diversity of textures and tastes with each morsel and how he focuses on aromas as he did with his famous Mogador macaron ― blending passion fruit puree with his own carefully crafted milk chocolate for a tart, fragrant and rich flavor bomb.

While palate-tingling combinations are an important component of a Herme macaron, the ingredients he uses also seem to play an equally crucial role.

Herme has been using French La Viette butter since 1986 to make his pastries and has been primarily using Spanish almonds from Valencia to craft the Italian meringue-based shells for his macarons.

“We use those almonds because they are not too bitter and are very nutty without being too overpowering,” he quickly explained.

While he remains unswervingly devoted to where he sources his ingredients, he and his team are incredibly mobile when it comes to creating different flavors like his Satine macaron.

“It is a blend of orange, passion fruit and cream cheese,” he said.

Herme, himself, is no longer involved on a hands-on level in the kitchen at his atelier, given his massive travel-centric schedule to his many outlets throughout the world.

He revealed that by focusing on fostering talented chefs to work with, he can maintain the quality and creativity of his brand.

As for freezing his macarons, which seems to be a necessity for his global business, he revealed he does not believe that freezing his confections mars his brand’s artisanal approach, especially considering his macarons need to be allowed to rest in a refrigerated state for 24 to 48 hours in order to achieve an ideal moistness. In fact, he stated that the process itself naturally facilitates the fermentation method.