[ The Korea Herald – Send E-mail ]
[Newsmaker] Korea’s Formula 1 dream coming to an end?
By Korea Herald
Published : Feb 9, 2015 - 20:13
Updated : Feb 9, 2015 - 20:13
The ambitious plan to make the southern part of the Korean Peninsula a stop on the global racing circuit may have come to a halt as the organizing committee of the Formula 1 race in Yeongam, South Jeolla Province, on Monday was reported to be considering disbanding.

According to local media reports, the organizing committee of the Formula 1 Korean Grand Prix recently decided to disband after the Federation Internationale de l’Automobile dropped the Korean race from its calendar.

The reports noted that the committee was in talks with Formula One Management, which has the commercial rights to the F1 Grand Prix, about compensation and other matters following the cancellation of the Korean event. 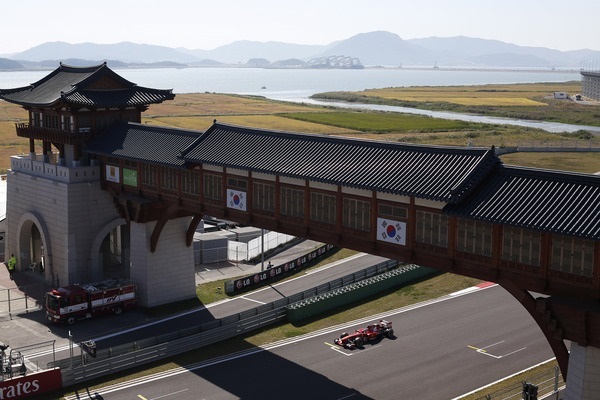 The Formula 1 Korean Grand Prix circuit in Yeongam, South Jeolla Province. (Formula 1 Korean Grand Prix organizing committee website)
The organizing committee, comprised of officials from the South Jeolla provincial government and others, failed to host the race in 2014 and 2015 due to fiscal restraints. According to the rules, South Jeolla Province is reportedly obliged to pay the Formula One Administration $43 million in compensation for a vacancy in the race.

“Nothing is for sure yet. We are still hoping for a rightful settlement. Then we will think about our future,” a member of the organizing committee told The Korea Herald, refusing to discuss the details of the compensation.

The plans for the Korean Grand Prix were announced in 2005, and since it was first held in 2010 it has seen continuous deficits.

The Board of Audit and Inspection in 2011 ordered the South Jeolla Province Government to discipline workers who had left regional authorities with hundreds of billions of won in losses by miscalculating the construction and operation fees. The BAI warned that the regional government, the major stakeholder of the organizing committee and the event, would be burdened with up to 1.1 trillion won in debt by 2016.

Civic activists in the Jeolla area filed complaints with the prosecution against former South Jeolla Province Gov. Park Joon-yung and his aides for breach of conduct in carrying out a plan that was unprofitable from the start. “They have misplaced figures and forecasts to hold an event that didn’t fit the regional status,” said Lee Sang-seok, one of the activists.

Meanwhile, the South Jeolla government in late January said it was planning to maximize the use of the circuit by extending the 5.6 km circuit by 1.1 km. The facility could be broken into two separate circuits for smaller racing events held simultaneously, the officials said.